Discussing the battle between the left and those who see it as a threat to the First Amendment, she declared, " Maybe the Founders were wrong to guarantee free exercise of religion in the First Amendment but that is what they did and I don't think we have to choose here. " Henneberger's awkward comment came as she attempted to defend the Catholic Church. [See video below. MP3 audio here.]

"House leader responds to Cain, vows to do 'for child care what we did for health care,'" notes the print edition's subheader to the 19-paragraph story.

"You can disagree with the House minority leader... or spend at least $65 million running 161,203 ads against her, as Republicans did in the past election cycle. But she hasn't been slowed or trivialized," Henneberger cheered.

Melinda Henneberger, who in 2009 proclaimed “Ted Kennedy has been a huge inspiration to me” and boasted of a “longtime political crush on the man who either in spite of his flaws and losses or because of them accomplished more than anyone else in my lifetime for causes that liberals (and other Americans) care about,” has joined the Washington Post where, per a Thursday announcement posted by Poynter’s Romenesko site, Henneberger “will write portraits of key political players and crucial campaign moments. She also will anchor a new blog on politics and culture.”

Chris Matthews on Thursday attacked Sarah Palin for making what appeared to be a hip double entendre concerning President Obama's oft-used State of the Union slogan "Winning the Future."

Even less surprising, the "Hardball" host also went after Congresswoman Michele Bachmann's (R-Minn.) slavery remarks - for the third night in a row (video follows with transcript and commentary):

Chris Matthews, on Monday's Hardball, used the attempt on Gabrielle Giffords' life, to not only portray America as some sort of gun crazed country, but also to blame the likes of Sarah Palin and Michele Bachmann for political violence as he blurted: "Sarah Palin using gun play language. What is she talking about crosshairs and reloading...and Bachmann out there with her kind of talk. I mean it seems like the way people talk now has, has gotten more ballistic...Why are guns talked about so much, especially on the right? Why?"

First up, Matthews depicted the United States as a uniquely gun crazed nation, especially in regards to political violence, as he told asked Arizona Democratic Congressman Raul Grijalva "In Mexico I don't see their leaders getting knocked off every couple of years....This country has a particular, historic problem with assassination of public officials." Apparently Matthews missed the news that just this last summer, in Mexico, a candidate for governor, Rodolfo Torre, was killed.

Then later on in the show, Matthews, along with the Huffington Post's Howard Fineman, went after a couple of his favorite targets, Palin and Bachmann, as seen in this exchange:

Chris Matthews: What's Wrong With the Word Liberal...I'm a Liberal'

In case you still had any questions about the political leaning of Chris Matthews, he proudly admitted on the air Thursday, "I'm a liberal."

In fact, right from the start of Thursday's "Hardball," the MSNBC host defended liberals claiming, "Most of the elected, the vast majority of the elected liberals, want to go for the gold, grab what victory`s attainable and build on it in the future.You know where I stand."

By the end of the program, it was indeed indisputably obvious where Matthews stands when he actually said with cameras rolling:

You know how you know you are going to win if you pass anything [regarding healthcare reform]? The Republicans will know they have lost...Let them keep score and it`s easy. It`s complicated when liberals get to keep score. We`re always arguing. Well, I`m a liberal, too.

Imagine that (videos embedded below the fold with partial transcripts, h/t Tweep insidepitch):

NY Times Vet, Now Politics Site Chief at AOL: 'Kennedy Has Been a Huge Inspiration to Me' 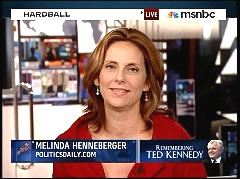 Melinda Henneberger, Editor-in-Chief of AOL's PoliticsDaily.com site where her bio touts how her “son’s first utterance beyond ma-ma and da-da really was 'algore,'” boasted on Thursday's Hardball of her infatuation with the late Senator Edward Kennedy and admiration for his left-wing policies, declaring:

Ted Kennedy has been a huge inspiration to me and just listening to the coverage over the last couple of days one of the things that struck me the most was listening again to his fabulous 1980 convention speech...

Henneberger, a New York Times reporter in Rome and Washington, DC for ten years ending in 2002, recalled how as a college graduate in 1980, the same year Ronald Reagan gave speeches which inspired many other Americans, “listening to that [Kennedy convention] speech that night was a hugely important, serious moment I think in all our lives, just thinking about the importance of giving back, of, you know, idealism” and so it was an address “I will never forget and was really moved to see again this week.” Asked by Matthews to name what Kennedy causes inspired her, Henneberger replied: “Caring for people who needed our help, thinking about other people, hanging in there when things were rough, not having it depend on whether you lost or won in the short-term.”