Earlier today, Washington Post columnist Melinda Henneberger favorably retweeted a story by NewsBusters alumna and Washington Free Beacon contributor Alana Goodman regarding newly-discovered audiotape of Hillary Clinton from an interview in the mid-1980s in which the likely 2016 presidential aspirant was rather lighthearted and occasionally laughing as she recalled a time where she successfully defended an accused child rapist by working out a plea deal for a much lighter sentence. "Defends man accused of raping 12-yr-old, laughs abt case RT @alanagoodman Hillary Tapes: http://wfb.tc/1iA2uMv v," Henneberger tweeted shortly after midnight on Monday..

Yet on the June 16 Hardball program -- on MSNBC, the nation's premiere "War on Women" network -- neither Henneberger nor Hardball anchor Chris Matthews nor Politico's Roger Simon broached the topic at any time during their discussion about the former secretary of state's rocky rollout of her Hard Choices memoir. Here's an excerpt of the June 15 story from Goodman (emphasis mine):

Newly discovered audio recordings of Hillary Clinton from the early 1980s include the former first lady’s frank and detailed assessment of the most significant criminal case of her legal career: defending a man accused of raping a 12-year-old girl.

In 1975, the same year she married Bill, Hillary Clinton agreed to serve as the court-appointed attorney for Thomas Alfred Taylor, a 41-year-old accused of raping the child after luring her into a car.

The recordings, which date from 1983-1987 and have never before been reported, include Clinton’s suggestion that she knew Taylor was guilty at the time. She says she used a legal technicality to plead her client, who faced 30 years to life in prison, down to a lesser charge. The recording and transcript, along with court documents pertaining to the case, are embedded below.

The full story of the Taylor defense calls into question Clinton’s narrative of her early years as a devoted women and children’s advocate in Arkansas—a narrative the 2016 presidential frontrunner continues to promote on her current book tour.

Her comments on the rape trial are part of more than five hours of unpublished interviews conducted by Arkansas reporter Roy Reed with then-Arkansas Gov. Bill Clinton and his wife in the mid-1980s.

The interviews, archived at the University of Arkansas in Fayetteville, were intended for an Esquire magazine profile that was never published, and offer a rare personal glimpse of the couple during a pivotal moment in their political careers.

But Hillary Clinton’s most revealing comments—and those most likely to inflame critics—concern the decades-old rape case.

Twenty-seven-year-old Hillary Rodham had just moved to Fayetteville, and was running the University of Arkansas’ newly-formed legal aid clinic, when she received a call from prosecutor Mahlon Gibson.

“The prosecutor called me a few years ago, he said he had a guy who had been accused of rape, and the guy wanted a woman lawyer,” said Clinton in the interview. “Would I do it as a favor for him?”

The case was not easy. In the early hours of May 10, 1975, the Springdale, Arkansas police department received a call from a nearby hospital. It was treating a 12-year-old girl who said she had been raped.

The suspect was identified as Thomas Alfred Taylor, a 41-year-old factory worker and friend of the girl’s family.

And though the former first lady mentioned the ethical difficulties of the case in Living History, her written account some three decades later is short on details and has a far different tone than the tapes.

“It was a fascinating case, it was a very interesting case,” Clinton says in the recording. “This guy was accused of raping a 12-year-old. Course he claimed that he didn’t, and all this stuff” (LISTEN HERE).

Describing the events almost a decade after they had occurred, Clinton’s struck a casual and complacent attitude toward her client and the trial for rape of a minor.

“I had him take a polygraph, which he passed – which forever destroyed my faith in polygraphs,” she added with a laugh.

Had this been any prospective 2016 Republican candidate instead of Mrs. Clinton, there's little doubt that it wouldn't have led tonight's Hardball, or at the very least been the first domestic political segment on following the lead stories on the escalating crisis in Iraq.

But instead, Mrs. Clinton was treated to the Hardball gang pushing the virtual reset button on the Hard Choices book tour with a segment cheekily titled "The Terrible, Horrible, No Good Rollout," in which Matthews and company essentially concluded that, yes, Mrs. Clinton was still a little rusty but was ultimately going to benefit from being knocked around a bit in the early going.

[Indeed, Matthews essentially argued the same thing last week when he compared Mrs. Clinton's early-going to a Broadway production working out the kinks in preview shows in New Haven, Connecticut.]

"This is a healthy sign," Simon offered. "Last time she ran, don't forget, she announced on videotape," which was "a perfect format" for obsessive message control, "where they could change every frame, the background, anything they wanted." But now, "she's got to go out, face the press in long interviews."

For her part Henneberger hailed the contentious NPR interview as "great for both Terry Gross and Hillary Clinton," with the latter benefiting because, "can you ever really go wrong in pushing back against the press?"

At no point was there any discussion that it's a bad sign for a Democrat to face an interview where she's being hit from the left on policy matters on what should be a friendly format that preaches to a huge swath of the base vote.

Also left completely unmentioned on tonight's Hardball were new poll numbers which should trouble the former secretary of state's camp. According to a new CNN/ORC poll, 55 percent of Americans have "a negative view" of Mrs. Clinton's handling of the Benghazi fiasco.

You may recall that earlier this month a Washington Post/ABC News poll found that a majority of Americans support a newly-announced select committee seated to investigate Benghazi. 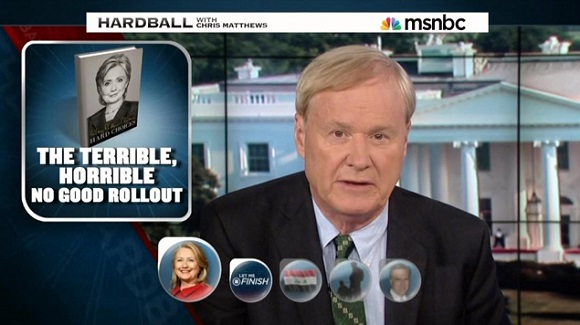