Citing how “members of the anti-war group MoveOn.Org named Iran, not Iraq, as their top issue,” and without once applying a liberal or left wing label, ABC's Word News on Monday night skewered Democratic presidential candidate Hillary Clinton from the left for voting for a resolution other candidates claim could allow President Bush to launch a war against Iran. Anchor Charles Gibson explained how “Clinton recently voted for an amendment in the Senate that would designate Iran's Revolutionary Guard as a terrorist organization. Other Senators running for President...are criticizing her vote, saying the amendment she supported could give the President authority to start a war against Iran.”

Reporter Kate Snow centered her story around how “Senator Clinton has been taking a lot of heat for that Iran vote, starting at the last debate.” Viewers heard saw video of Clinton being confronted at an Iowa event, and Mike Gravel charge “I'm ashamed of you,” before Snow maintained “it's the kind of vote that angers the Democratic faithful.” Snow concluded by benignly describing MoveOn as simply an “anti-war” group: “Tough talk on Iran is perceived by some Iowans as all too similar to the tough talk from Democrats in the run-up to the Iraq War. And, Charlie, last week, members of the anti-war group MoveOn.Org named Iran, not Iraq, as their top issue.” So, MoveOn speaks and ABC News jumps?

ABC Leaps to Defend the Laughter of Fun-Loving Hillary Clinton

On Monday’s "Good Morning America," ABC reporter Kate Snow rose to the defense of Hillary Clinton and the fact that she’s been seen manically giggling in many interviews. Referencing the mocking that the Democratic presidential candidate has taken on "The Daily Show" and other places, Snow asserted that either Hillary Clinton is either "having a really good time out on the campaign trail, or she's the master of a shrewd political skill, disarming her critics with a gleam in her eye and a roar straight from the belly." So, the former First Lady is vibrant and fun-loving or brilliant in a good natured way? Those are the only two options?

During the segment, only Democratic operatives or Clinton campaign officials were asked to explain the candidate’s recent outburst of giggles (except for a brief "Daily Show" clip). According to Snow, "Her inner circle insists her laugh is not calculated. It's natural." Clinton operative Capricia Marshall found Hillary’s laughter to be "contagious." Democratic strategist Chris Lehane glowingly described the cackling as "smart and pretty adroit." What else would ABC and Kate Snow expect them to say?

ABC's Big Scoop: All Not Perfect in Iraq 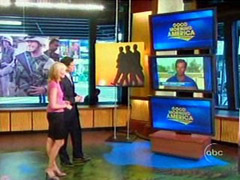 Stop the presses! ABC's got a scoop: the situation in Iraq isn't ideal.

Trying to pave the way for the rejection of the Petraeus report, today's "Good Morning America" took the tack that the lack of complete calm is proof of the surge's failure.

ABC's Kate Snow: 'Everyone Is Concerned' About 'Getting the Hell Out of Iraq'

The issues of interest to Iowa caucus-voters “tend to be the same issues that everyone is concerned about around the country,” ABC's Kate Snow maintained Tuesday night, a contention she illustrated by citing “one voter” who recited to her a litany of liberal agenda topics: “She's worried about health care, Social Security and...'getting the Hell out of Iraq.'”

Snow's conclusion from Des Moines followed a World News piece from Jake Tapper in New Hampshire where he similarly found getting out of Iraq is the most important issue, at least to “independent” voters. After pointing out how there are more independents than either Republicans or Democrats in the Granite State, Tapper explained that “a key issue for so many independents here, such as contractor Gerry Hamel, is opposition to the war in Iraq.” Hamel expressed his view that “we can only be there so long and it's time to leave.” Tapper helped Hamel out as Tapper unintentionally showed how Snow's take on Iraq matched the Democratic position: “And the Democratic candidates are saying that, not the Republicans?” Hamel agreed.

The Census Bureau announced a drop in the poverty rate, but NBC and, especially CBS, on Tuesday night managed to turn the good news into bad by emphasizing an increase in the number of Americans without health insurance while ABC, in contrast, portrayed the decrease in poverty as good news. “A bright spot of economic news today,” fill-in ABC anchor Kate Snow announced, “the percentage of Americans living in poverty dropped last year” by “three-tenths of a percent from the year before.” Reporter Barbara Pinto actually acknowledged some positive trends during the Bush years, pointing to how “in the past four years, the country has added nearly 7 million jobs. And in those four years, the average household income has risen about $700.” Pinto didn't ignore liberal class-warfare arguments, but after a left-winger asserted “there's very little that trickles down to those at the bottom,” Pinto countered: “Obviously, some of that growth is trickling down.”

Though the AP headlined its story, “U.S. poverty rate declines significantly,” NBC anchor Brian Williams reported it dropped “a bit” and CBS anchor Katie Couric relayed how “the poverty rate is down slightly.” And while most of those in poverty manage to have many comforts of life, from good-sized homes to cars, Couric insisted poverty level income is “hardly enough for food and housing, much less other items like health insurance.” Wyatt Andrews devoted a full story to “the highest number of uninsured Americans in 20 years: 47 million without health insurance.” Andrews failed to note that 16 million of the uninsured are illegals or on Medicaid while most people are uninsured for only short periods.

It was President Bush versus the children on ABC “World News” August 26.

“World News” attacked the administration’s position objection to a $35 to 50 billion increase in the State Children’s Health Insurance Program (SCHIP) that was passed by Congress before the August recess. In fact, the program characterized Bush’s position as a dramatic cut.

Washington State authorities and the FBI on Monday released photos, taken by the captain of a Pugent Sound ferry, of two men that passengers and crew saw acting suspiciously -- taking photos of doorways, for instance -- but Thursday's Good Morning America seemed more concerned about “ethnic profiling” than identifying the potential terrorists who had been seen on up to a half-dozen ferries. “The case is raising concerns about security. But it's also raising concerns about possible ethnic profiling,” declared news reader Kate Snow. Reporter Neal Karlinsky asked: “Are these two men terrorists casing the boats for attack?” or “are they totally innocent passengers, the victims of ethnic profiling?” After noting their suspicious behavior, Karlinsky characterized them as victims: “But the men are not accused of anything, leading the Muslim community to wonder, what if the two men did not appear to be of Middle Eastern descent?” Aziz Junejo, Seattle Muslim Community spokesman, asserted: “To point that person out because of the features of a Middle Easterner is just plain wrong.” Karlinsky concluded: “The FBI says the huge ferry system is among the most vulnerable maritime targets in America. The question is, are these men a threat, or just victims of a jittery public?”