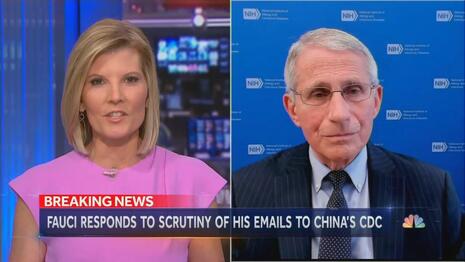 Thanks to the use of the Freedom of Information Act, the American people gained access this week to thousands of Dr. Anthony Fauci’s e-mails and revelations that he knew the National Institutes of Health may have funded gain-of-function research for coronaviruses, that COVID-19 may have come from a lab, and that masks didn’t work. And in an attempt to cover up the truth, ABC’s World News Tonight and the CBS Evening News ignored the scandal completely.

But for NBC’s part, Nightly News featured fill-in anchor Kate Snow picking the more benign topic of probing the origin of the virus and weakly asking Fauci to defend the government.

“You exchanged e-mails with the Chinese director of their Center for Disease Control. President Trump's former chief of staff today suggested that you and others didn't do enough to investigate the origins of the virus,” she prefaced. “Did you?”

After Fauci said that he didn’t think researching the origin of the global pandemic was the job of the NIH, Snow followed up by asking: “But in general, do you think the government did enough to look into where this virus came from?” Fauci argued that the WHO did that, with no mention that the report was approved by China first.

But according to the reporting of Jerry Dunleavy at the Washington Examiner, in the early days of the pandemic, Fauci appeared to know that the NIH had funded controversial research on coronaviruses at the Wuhan Institute of Virology, something he later denied in a Senate hearing.

“Anthony Fauci seemed aware of the looming gain-of-function and Chinese collaboration controversies related to National Institutes of Health funding and the Wuhan Institute of Virology, new emails from the start of the COVID-19 pandemic reveal,” Dunleavy reported.

More than a year prior, however, Fauci sent an email to NIH Principal Deputy Director Hugh Auchincloss on Feb. 1, 2020, with an attachment labeled “Baric, Shi et al - Nature medicine - SARS Gain of function.pdf” and the subject line, “IMPORTANT.” Fauci’s message had a tone of urgency, saying, “Hugh: It is essential that we speak this AM. Keep your cell phone on. I have a conference call at 7:45 AM with [Health and Human Services Secretary Alex] Azar. It likely will be over at 8:45 AM. Read this paper as well as the e-mail that I will forward to you now. You will have tasks today that must be done. Thanks, Tony.” Fauci sent the same attachment to Lawrence Tabak, the principal deputy director and deputy ethics counselor at NIH, with the subject line “FW: IMPORTANT” and the message, “Here it is.”

Auchincloss replied to Fauci later that day, saying, “The paper you sent me says the experiments were performed before the gain of function pause but have since been reviewed and approved by NIH. Not sure what that means since Emily is sure that no Coronavirus work [has] gone through the P3 framework.” Although “Emily” is not identified, Emily Erbelding, director of the NIH’s division of microbiology and infectious diseases, is mentioned in over five dozen Fauci emails. Auchincloss continued: “She will try to determine if we have any distant ties to this work abroad.” Fauci replied, “OK. Stay tuned.”

Other reporting by Dunleavy exposed e-mails from Fauci that prove he tried to “cast doubt” on the “Wuhan lab leak hypothesis.” “Fauci...appeared to provide guidance to scientists who pushed back against the lab leak hypothesis, and he shared articles with reporters and other health officials that critiqued the possibility that COVID-19 may have escaped from a Chinese government lab,” he wrote.

And while the networks were desperately trying to keep the truth from their viewers, Fox News Channel’s Special Report was giving it to theirs.

Edson also reported on the fact one e-mail showed a conversation about how the virus didn’t seem natural. “Another e-mail to Fauci, this one from Professor Kristian Anderson claiming ‘some of the features of the virus potentially looked engineered.’”

In the e-mail, Anderson went on to tell Fauci that her and other researchers “find the genome inconsistent with expectations from evolutionary theory.”

The networks also didn’t want to show people the other e-mail where Fauci admitted: “The typical mask you buy in the drug store is not really effective in keeping out virus, which is small enough to pass through the material.”

With this level of organized censorship of an e-mail scandal, you’d think his name was Anthony Clinton.

This gross example of journalistic malpractice by the network was made possible because of lucrative sponsorships from Prevagen on ABC, Liberty Mutual on CBS, and Dawn on NBC. Their contact information is linked so you can tell them about the biased news they fund. CBS Evening News also asks people to text anchor Norah O’Donnell at this number: (202) 217-1107.

RICH EDSON: And good evening, Bret. And as the world confronts the COVID-19 pandemic still, there is a greater focus now on how it all began. And how much that thinking about its evolution and how it began as evolved over the past year.

An inside look into the early pandemic response. Thousands of Dr. Anthony Fauci's emails. BuzzFeed secured these though the Freedom of Information Act.

One email from April 2020, the director of the National Institutes of Health, Dr. Francis Collins, sending Fauci a link referencing a Fox News report that multiple sources believe the coronavirus originated in Chinese lab before accidentally escaping.

Collins called that a “conspiracy” then. He now says by “conspiracy” he meant rumors that the virus was an engineered bioweapon.

DR. FRANCIS COLLINS: There was this other idea that maybe it was an accident, lab leak. That the institute that had been studying this virus had happened somehow in nature and it got loose. I never rejected one, although there was no evidence to support it.

EDSON: Another email to Fauci, this one from Professor Kristian Anderson claiming “some of the features of the virus potentially looked engineered.” Though, Anderson later said new data and analysis clearly show the coronavirus was not constructed in a lab.

KATE SNOW: Dr. Fauci, some of your e-mails were obtained by several news organizations under the Freedom of Information Act. You exchanged e-mails with the Chinese director of their Center for Disease Control. President Trump's former chief of staff today suggested that you and others didn't do enough to investigate the origins of the virus. Did you?

DR. ANTHONY FAUCI: So, when you talk about investigating the origins, I don't believe that that's the role of the National Institutes of Health.

SNOW: But in general, do you think the government did enough to look into where this virus came from?

FAUCI: Well, you know, it depends on what you mean. The WHO went and looked there. Most people feel that, in fact, we need to go further and get more cooperation and collaboration from the Chinese to be able to determine the origin.