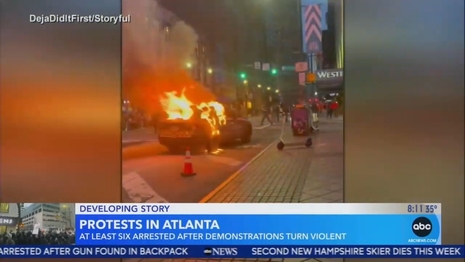 Late Saturday night, Atlanta, Georgia was beset by the latest riot by Antifa and far-left thugs as they set a police car on fire, shot explosives at a police building, and caused property destruction. All told, six have been arrested so far and charged with domestic terrorism. And despite nearly four minutes of coverage on Sunday’s Face the Nation, CBS’s flagship morning and evening shows refused to give it a news brief or full report.

Monday’s CBS Mornings had seven seconds in their Eye Opener (which NewsBusters generally doesn’t count) and 51 seconds on their overnight show CBS Morning News from host Anne-Marie Green that airs in the 4:00 a.m. Eastern hour in the Washington D.C. market.

“Well, six people were arrested after a protest in downtown Atlanta turned violent. Demonstrators threw rocks, vandalized buildings, and lit a police car on fire Saturday. The protests followed the killing of an environmental activist during another protest last week,” Green said.

In contrast, ABC was on the case with a thorough three minutes and 32 seconds (excluding teases) on Sunday’s Good Morning America (GMA) and World News Tonight.

Johnson added in the report that the original “protest over a proposed police training facility and the fatal police shooting of” Manuel Esteban Paez Terán “erupting into chaos.” From Atlanta, correspondent Elwyn Lopez described the chaos even though she refused to utter the word “Antifa,” “far-left,” or even “leftists” in describing the thugs behind the violence (click “expand”):

LOPEZ: Overnight, chaos erupting in downtown Atlanta. [EXPLOSIONS] Firecrackers set ablaze. This police car in flames. [EXPLOSIONS] Police arresting six people. The protest against a new police training center and the killing of an environmental activist started peacefully, but took a turn when some rioters smashed windows and set a cruiser on fire.

ATLANTA POLICE CHIEF DARIN SCHIERBAUM: A group inside that marching crowd decided to start committing illegal acts, which included the breaking of windows and also attacking police cruisers that were in the area.

LOPEZ: At least three businesses damaged before authorities restored order. This just days after officers shot and killed a protester in a forest where the training center will be built. Demonstrators had occupied it for months. Authorities say that protester shot first, but fellow environmental activists claim the camp was peaceful and unfairly attacked.

ATLANTA MAYOR ANDRE DICKENS (D): We continue to protect the right of peacefully protest. We will not tolerate violence or property destruction.

LOPEZ: No officers or citizens were injured. The Atlanta mayor saying that several of those arrested were from out of state. The governor here saying that those crimes won't be tolerated and fully prosecuted.

Lopez returned for another full wrap-up on World News Tonight. Weekend anchor Linsey Davis set her up by telling viewers about the “chaotic scene overnight” with “[a]t least six people were arrested when fiery protests erupted” as “[p]rotestors set at least one police car on fire.”

This time, Lopez said rioters who donned “masks grew violent” and “wreaked havoc” amid “[h]undreds of demonstrators” who “poured into the streets” against “the killing of an environmental activist and plans to build a new police training center opponents have dubbed cop city.”

Nonetheless, she ran defense for the anti-cop mob by emphasizing that “[m]ost of them peacefully protesting” and “the vast majority of those arrested are from out of state” with “[o]nly one...from Georgia.”

Beyond that, ABC had 41 seconds on their overnight shows early Monday.

Switching to NBC, Sunday’s NBC Nightly News and Monday’s Today combined for a minute and 19 seconds, but also refused to label the rioters from Antifa or even left-wing.

Sunday Nightly News anchor Kate Snow had a 22-second brief about the “violent protest” being “under investigation”, adding:

A group demonstrating against a new police training center got out of hand. Police say some people smashed windows and set a patrol car on fire. Others were carrying explosive devices. Six people were arrested and charged with domestic terrorism, arson, and criminal damage.

And on Today, correspondent Blayne Alexander split her liveshot between the Atlanta riot and protests over the death of a black man in Memphis (click “expand”):

KOTB: Two major cities in the south are on edge in the wake of deadly incidents involving police that have sparked protests. Over the weekend, those demonstrations turned violent in Atlanta. NBC’s Blayne Alexandra is there are for us. Hey, Blayne. Good morning.

ALEXANDER: Well, Hoda, good morning to you. That’s right. Over the weekend in Atlanta, we saw a violent clash between police officers and protesters who were protesting a new police training facility. All of this ended with six people being arrested late Saturday night after cars were set on fire, a police vehicle was set on fire, and windows were smashed at a downtown business. Now, all of this comes just days after a man who was protesting that same training facility was shot and killed by officers. But according to the GBI, they say that that man actually fired at officers first, injuring a Georgia state patrol trooper. Hoda, they also say that entire video — that entire incident, rather, was not caught on police body camera video.

And on both CBS Mornings and Sunday’s Weekend News (which aired only in western time zones), they touted Beyonce’s performance over the weekend in Dubai for an reported price of $24 million.