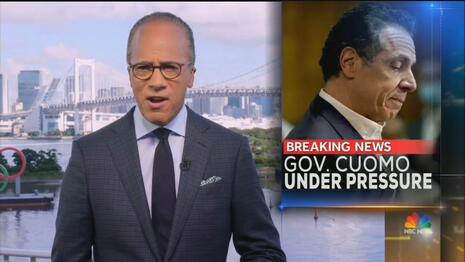 Only two days after New York Attorney General Letitia James (D) released her report detailing how Governor Andrew Cuomo (D-NY) committed criminal and sexual misconduct, CBS Evening News thought it was time to move on. Meanwhile, ABC’s World News Tonight and NBC Nightly News continued to hammer away at Cuomo, even bringing up his nursing home deaths scandal. ABC even busted out the “walls are closing in” line, Thursday night.

Instead of covering Cuomo’s scandals, CBS decided it was better to celebrate President Biden promoting electric cars. It was just Tuesday that anchor Norah O’Donnell did an interview with accuser Charlotte Bennett made headlines and was used by other outlets. Did they think doing the interview meant they could duck out early?

ABC filling-anchor Linsey Davis came out firing at the top of their segment. “The walls are closing in on New York Governor Andrew Cuomo, after that scathing report alleging a pattern of sexual harassment,” she announced.

Adding: “The State Assembly is now weighing his impeachment, saying their investigation is nearing completion, as five district attorneys are now eyeing possible criminal investigations and now one of his accusers is planning to file a civil suit, as well.”

And according to correspondent Erielle Reshef, the impeachment train was getting ready to leave the station (finally). “The state's Judiciary Committee giving Cuomo's counsel another week to turn in additional evidence, noting the assembly ‘Will soon consider potential articles of impeachment,’” she reported.

Reshef even highlighted how the scandals have stacked up and the chairman of the Democratic Party in New York, Jay Jacobs who had pressured Cuomo to resign:

RESHEF: The governor under fire for his handling of nursing homes during the pandemic, his book deal, and now those searing allegations of sexual harassment against 11 women. Cuomo maintaining his innocence throughout, but support, even from his closest allies, evaporating.

JACOBS: I began the process of trying to talk him into resignation, seeing that resignation was the best course of action.

Over on NBC, correspondent Kate Snow also went over how the scandals were stacking up too much to ignore. “Today, the State Assembly Judiciary Committee said it's wrapping up impeachment investigation into sexual harassment allegations, and also whether Cuomo covered up nursing home COIVD deaths or had staffers help write his book,” she said.

She also spoke with a member of the Assembly Judiciary Committee who said there was no way Cuomo was surviving:

You don't see any way he can survive this politically?

Snow even seemed to throw shade at Cuomo as she was wrapping up her report. On the notion that everyone in Albany knew the end was near “The only one who doesn't see that yet he says is the governor himself,” she said.

CBS’s apparent exhaustion with covering Governor Cuomo’s sexual misconduct was made possible because lucrative sponsorships from Fidelity and Leaf Filter. Their contact information is linked so you can tell them about the biased news they fund. CBS Evening News has also asked people to text anchor Norah O’Donnell at this number: (202) 217-1107.

LESTER HOLT: In New York, Governor Andrew Cuomo is so far refusing to accept growing calls to resign after this week's report detailing numerous allegations of sexual harassment, which he denies. Kate Snow has the latest.

JAY JACOBS (Democratic Party chair, NY): I think the circle around the governor is just getting smaller.

What was it in that report that made you change your mind?

JACOBS: I was personally upset by the magnitude of it and the specificity of it.

SNOW: On Wednesday, he called the governor and pleaded with him to resign. It didn't work.

JACOBS: He was very clear that he had felt that his side of the story had not been fully aired, and he wanted to do that. He doesn’t think he’s being treated fairly.

The committee asking Cuomo's attorneys to provide “any additional evidence or written submissions” by the end of next week. Committee member Phil Steck says unless Cuomo resigns, a lengthy impeachment process seems inevitable.

You don't see any way he can survive this politically?

SNOW: While Cuomo denies any wrongdoing, Jacobs thinks he will eventually recognize he has to step down.

JACOBS: It's hard. You know, when this is your life, your legacy, your history with your father, and it's all coming to an end.

SNOW: The only one who doesn't see that yet he says is the governor himself. Kate snow, NBC News, New York.