CNN contributor Roland Martin used an unoriginal line to attack Rush Limbaugh on Monday’s Election Center program. Host Campbell Brown wanted Martin, a Barack Obama supporter, to comment on something the talk radio host had said about Colin Powell’s endorsement of the Democratic presidential candidate: "Rush Limbaugh said today, this is about race. That's all it's about." Martin’s response: "I think I will quote Al Franken when talking about Rush Limbaugh -- is a stupid, fat idiot."

Martin made the comment during a panel discussion with Brown, CNN senior political analyst Gloria Borger, and Kevin Madden, the former spokesman for the Mitt Romney presidential campaign, in which the four of them discussed the Powell endorsement of Obama. After his cliched attack, the CNN contributor accused Limbaugh, as well as Pat Buchanan and George Will, of disregarding Powell’s record and simplifying his endorsement to a matter of skin color: "Colin Powell gave one of the most thoughtful, meticulous endorsements of any candidate, and laid it all out very methodically, and it is an insult for people like Rush Limbaugh and Buchanan and Will and others to somehow say, oh, it's only because he's black."

During the panel discussion on the September 14 edition of ABC's "This Week," an interesting exchange occurred between conservative columnist George Will and ABC senior national correspondent Claire Shipman. On the topic of Senator John McCain's recent ad about a sex education bill Senator Barack Obama voted for while in the Illinois state legislature, Shipman could not seem to understand Will's point of view.

Host George Stephanopoulos described the ad as "looking at a vote that Barack Obama had in a committee when he was a state senator that advocated comprehensive sex education from grades K through 12.... The debate is whether -- what comprehensive sex education means and whether it means that kindergartners should be taught how to ward off a sexual predator or something more extensive than that."

In response, Will argued:

It is very common across the centuries for parents, not schools, parents to tell their children to be aware of strangers. What's new here and reflects a conservative-liberal difference is the idea, a, it has to be tarted up as sex education to be wary of strangers, and b, parents can't but the schools must in the kindergarten. Now that's a cultural divide and let's vote.

ABC's George Stephanopoulos clearly had John McCain's houses on his mind Sunday, for during the latest installment of "This Week," the presumptive Republican presidential nominee's real estate holdings were discussed with every guest.

What Stephanopoulos may not have expected was Time's Mark Halperin claiming that "this is going to end up being one of the worst moments in the entire campaign for one of the candidates, but it's Barack Obama."

Adding delicious insult to injury, much to Democrat strategist Donna Brazile's dismay, Halperin saw the Obama campaign's attack on McCain not knowing how many houses he owns as opening the door for the Arizona senator to bring up the Illinois senator's connections to Tony Rezko, Reverend Wright, and William Ayers (video embedded right, partial transcript follows):

A real-life secessionist movement seizes a historic American landmark and major media outlets treat the uprising as a curiosity of mere passing interest. Meanwhile, that same media gives a thumbs-up to a seditious, balkanizing plan for Aloha State apartheid.

AP's Mark Niesse reported yesterday, "Native Hawaiian sovereignty advocates" who are members of the group known as the Hawaiian Kingdom Government occupied the grounds of the palace of Hawaii's final monarch, Queen Lili`uokalani. "Hawaiian activists have long used the palace as the site for protests of what they call the United States' occupation of the islands, but never before had they physically taken control," wrote Niesse.

Pacific Business News reported that the "protesters" surrounded the Iolani Palace in Honolulu, chained palace gates, posted no-trespassing signs, and told "palace officials that the palace is their rightful seat of government." The PBN story noted that "Only those with Hawaiian blood, as well as news media, were initially allowed onto palace grounds."

The Honolulu Advertiser reported that the "sovereignty group" claimed its actions were "not a protest or demonstration but a reoccupying of its legitimate seat of government." CNN called the occupiers simply a "group of native Hawaiians."

Will Against The Liberal World on 'This Week'

Have a look at the screencap from today's This Week, then please answer this serious question: has ABC no shame? How does the network justify a round-table consisting of four liberals against one conservative?

George Will: McGovern Wanted Walter Cronkite As His Veep In 1972

In the current Newsweek (the February 25 issue), columnist George Will wrote about George McGovern and the current delegate selection rules on the Democratic side. But what stuck out was Will's subhead on McGovern: "He thinks he could have won in 1972 with a running mate called 'the most trusted man in America' -- Walter Cronkite." Will reported: 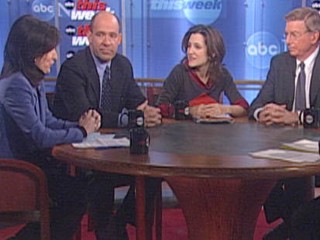 A truly extraordinary thing happened Sunday morning on ABC's "This Week": the panel and the host seemed to agree that former President Bill Clinton's antics on the campaign trail are hurting Hillary's chances of winning the Democrat presidential nomination.

Maybe even more surprising, the editor of the ultra-leftwing publication "The Nation," Katrina vanden Heuvel, quoted someone close to the Clinton campaign as having said, "People are looking at him like a little league dad who's having these temper tantrums in every state."

Making matters worse, George Will referred to the former president as "an Olympic-class whiner," while host George Stephanopoulos said, "Some people are concerned about this, even inside the Party," and fretted, "I have no indication at all though that President Clinton's going to stop."

Without further ado, and for your entertainment pleasure, here's a partial transcript of this truly delicious panel segment (video available here, relevant section begins at minute 7:25):

Worst job in America this morning: Clinton campaign staffer assigned to inform Hillary of her treatment at the hands of ABC's "This Week" panel.

From moderator George Stephanopoulos to former Gore campaign manager Donna Brazile, to the husband-wife tandem of Jay Carney of Time and Claire Shipman of ABC, to conservative sage George Will, it was a decidedly downbeat take on Hillary's fortunes.