Ari Melber is the latest liberal cable-news host to bathe in the warm waters of George Will's contempt for the Trump administration. Will's latest column, Melber said, pitched Trump as a "baby" who needs Vladimir Putin's day care. Will's column was headlined "This sad, embarrassing wreck of a man" and began like this:

America’s child president had a play date with a KGB alumnus, who surely enjoyed providing day care. It was a useful, because illuminating, event: Now we shall see how many Republicans retain a capacity for embarrassment.

This gained Will a spot on MSNBC, and a comparison to radical-feminist New York Times columnist Michelle Goldberg, who was also in the segment. Considering his studio location, Will also worked in his contempt for Fox News, which paid him as a contributor for four years, but dumped him in 2017. The chyron on screen spiced Will up (fact-checker alert!):

Melber began with the requisite honor and respect for such brave dissident writings as democracy dies in darkness:

MELBER: We begin with the Washington Post's George Will. His new column says Donald Trump is a "child president" --kind of like a baby -- with a quote "play date with a KGB alumnus." And Michelle Goldberg a columnist for the New York Times, who writes in her own paper that Trump has a slavish and toadying impression toward Trump this week.....

Mr. Will, I begin with you. because as a long-time reader of yours, you are not known for being reflexively or automatically hypercritical of Republican presidents on foreign policy, although you've made your criticisms before. I think this is the first time you've used this language about a president in the relationship with Russia. What moved you to do that? What concerns you what appears to be an unfolding Trump-made crisis in the U.S. relationship with Russia this week, sir? 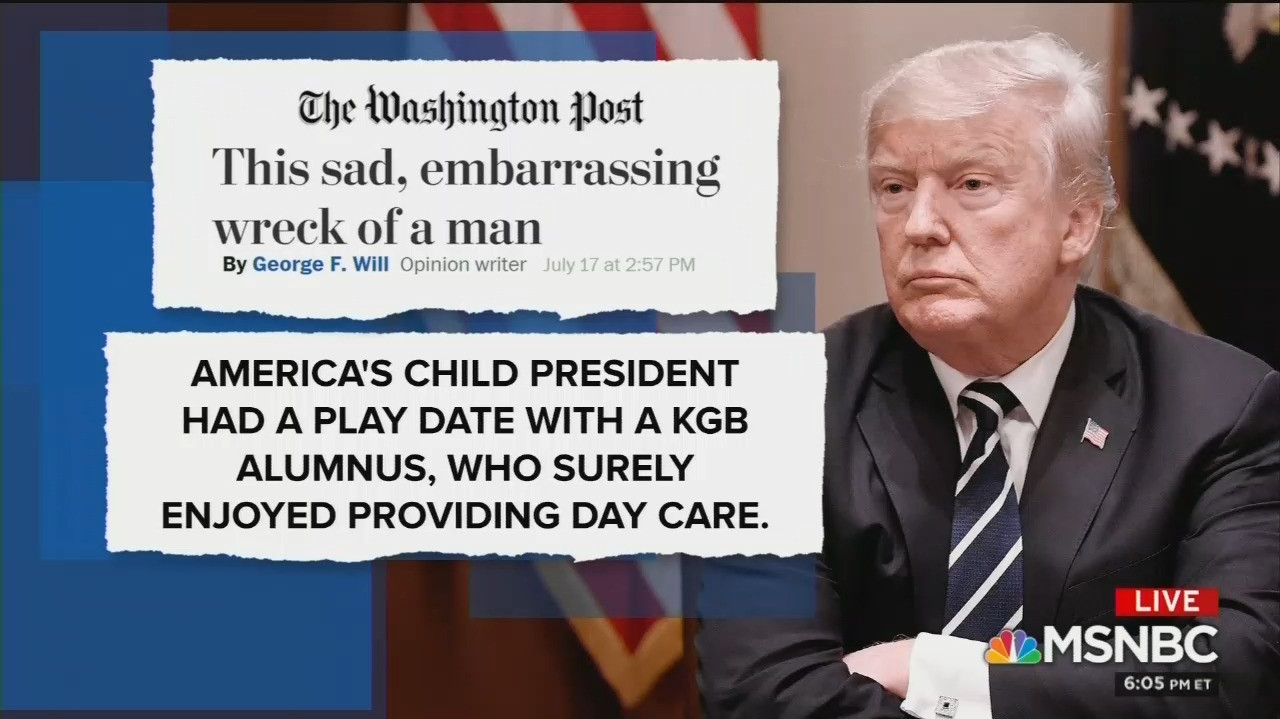 WILL: You're quite right this is Trump-made. The president is, and I want to say this as delicately as possible, syntactically challenged. He has a very difficult time getting from subject-object-predicate through a sentence. His sentences tend to explode in mid-flight. For that reason it sometimes is difficult to know what he intended to say. I think as a matter of philosophy, if you can't say something, you can't think it. The fact that a lot of what he says comes out in confused language indicates that there's confusion straight through.

That said, it was quite clear, (A) what he said in Helsinki, which is that he did not side with the U.S. Intelligent agencies. And (B) that someone, and I would love to have an analysis of what happened in the White House to bring this about, someone made him sit down and read a statement. He doesn't like to read. He doesn't like to read statements. [Laughter] But to actually go through with this kind of contrition theater after that. But then as soon as he was done with the contrition, he began to say, well, there are a lot of other people out there. Again, a kind of verbal gaffe that just put more fog back in place.

Melber pressed on (with a second "sir"):

MELBER: So a follow-up, when you say, sir, "contrition theater" -- your emphasis is on the notion that this was not authentic?

WILL: Of course. I mean, this is -- I don't know if it's the case, as has been reported, that some senior White House people, including perhaps the chief of staff were orchestrating pushback from the Hill in order to get the president to do this. It would have been quicker just to go one-stop shopping to Fox News and get someone there to disapprove of it. [Several did.]