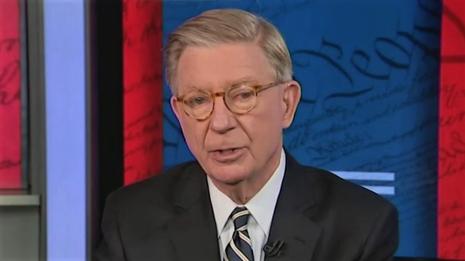 George Will is just another pseudo-conservative pundit at The Washington Post. He’s Jennifer Rubin with shorter hair. His latest column seals this image, explicitly calling for a rout of congressional Republicans, much to the delight of the liberal media. He compares Senate Republicans to Vichy collaborators with the Nazis:

Senate Republicans must be routed, as condign punishment for their Vichyite collaboration, leaving the Republican remnant to wonder: Was it sensible to sacrifice dignity, such as it ever was, and to shed principles, if convictions so easily jettisoned could be dignified as principles, for ... what?

He also compares them to affection-starved dogs: “Voters must dispatch his congressional enablers, especially the senators who still gambol around his ankles with a canine hunger for petting."

CNN’s Chris Cillizza chronicled his delight in an article headlined “One of America's most prominent conservative columnists wants Republicans to lose in 2020.”

NPR’s Morning Edition interviewed him about the column, under the headline “Conservative Columnist George Will Thinks It's Time For GOP Reboot.” Reboot? Will said a "rout," not a “reboot.” When I call for NPR to be denied federal money, that's a "reboot," but they would consider it a "rout."

This column absolutely demonstrates Will is not a conservative. Demanding a “rout” of the Republican Party is enabling Democrats making noises about a radical agenda of “Medicare for All,” a “Green New Deal,” government-funded abortion, ending border enforcement, taking tax-exempt status away from churches and organizations that refuse to recognize same-sex marriage…and so much more.

It should be obvious that Will is supporting this agenda by advocating the removal of any obstacles to it.

NPR anchor Rachel Martin didn’t challenge Will at all, didn’t ask him it was fair to compare Republicans to Nazis or dogs. It was blank-slate time:

MARTIN: Did you think in the beginning when President Trump took office that congressional Republicans would be a check on him and his potential overreach?

WILL: I didn't expect much. I did not quite expect that they would be quite this abject in responding to their fear. The funny thing is their behavior is entirely explained by fear. They are terrified of their voters. They are terrified of the Republican base, which is more solidly behind this president than it ever has been behind any other Republican president. Happily, they're such soft wax, they'll change again as soon as the cause of their fear is gone, which I expect him to be next January 20 at noon.

Will is so cocky about Trump’s defeat he told Martin that Biden could win just by staying in his basement until November:  “It's Biden's to lose. And if he stays in his basement, he won't lose it…. I think he's one of the beneficiaries of the great lockdown. He leaves the national stage to the president, and the president is using it in a way very injurious to himself.”

All of this insulting talk of shedding principles, of sacrificing dignity, of being “soft wax” for powerful men, can just as easily be applied to George Will, pleasing his employers at The Washington Post. He’s melted butter for Bezos.

It’s certainly ludicrous to call him a “conservative”….when making the path straight for a leftist “revolution” is what he’s advocating.