Never-Trumper George Will SLAMS Biden Disinfo Board, Warning of Its Return

Even Never-Trump commentator George Will condemned President Joe Biden’s Disinformation Governance Board, as he warned Americans to be wary of its return.

He elaborated further: “DHS realizes that its 10-thumbed debut of this boneheaded idea almost doomed it, so the ‘pause’ feigns deliberation while the department plots the DGB’s resurrection.”

Will outlined precisely why a resurrected DGB would simply be a political weapon of Biden’s DHS: “If — when — the DHS’s ‘pause’ ends and a resuscitated disinformation board buckles down to protecting Americans from falsehoods, it will of course concern itself with only disinformation of foreign origin, the theory being that only this sort threatens national security. The theory will, of course, be disinformation.” 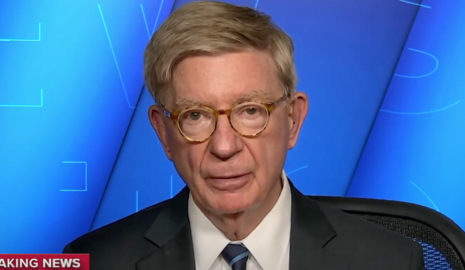 He also called out the board for its widely discredited and resigned leader Nina Jankowicz: “Before becoming, for three weeks, head of the ‘nonpartisan’ (so said the president’s press secretary) disinformation board, Jankowicz had a colorful career chastising ‘Republicans and other disinformers.’ The contents of Hunter Biden’s laptop? ‘A Trump campaign product,’ she decreed. Her certitudes are many.”

A grim historical callback in Will’s piece summarized why it's so politically dangerous for ruling political parties to determine what is considered true:

John F. Kennedy’s Federal Communications Commission harassed conservative radio, and when a conservative broadcaster said Lyndon B. Johnson used the Gulf of Tonkin incident in 1964 as an excuse for Vietnam escalation, the Fairness Doctrine was wielded to force the broadcaster to air a response.

Will slamming the Biden DHS for its DGB is also notable precisely because of Will’s history of bombastic anti-Trump rhetoric. In a piece headlined “Trump must be removed. So must his congressional enablers,” he compared Trump-friendly Republicans to Nazi collaborators:

Senate Republicans must be routed, as condign punishment for their Vichyite collaboration, leaving the Republican remnant to wonder: Was it sensible to sacrifice dignity, such as it ever was, and to shed principles, if convictions so easily jettisoned could be dignified as principles, for . . . what?