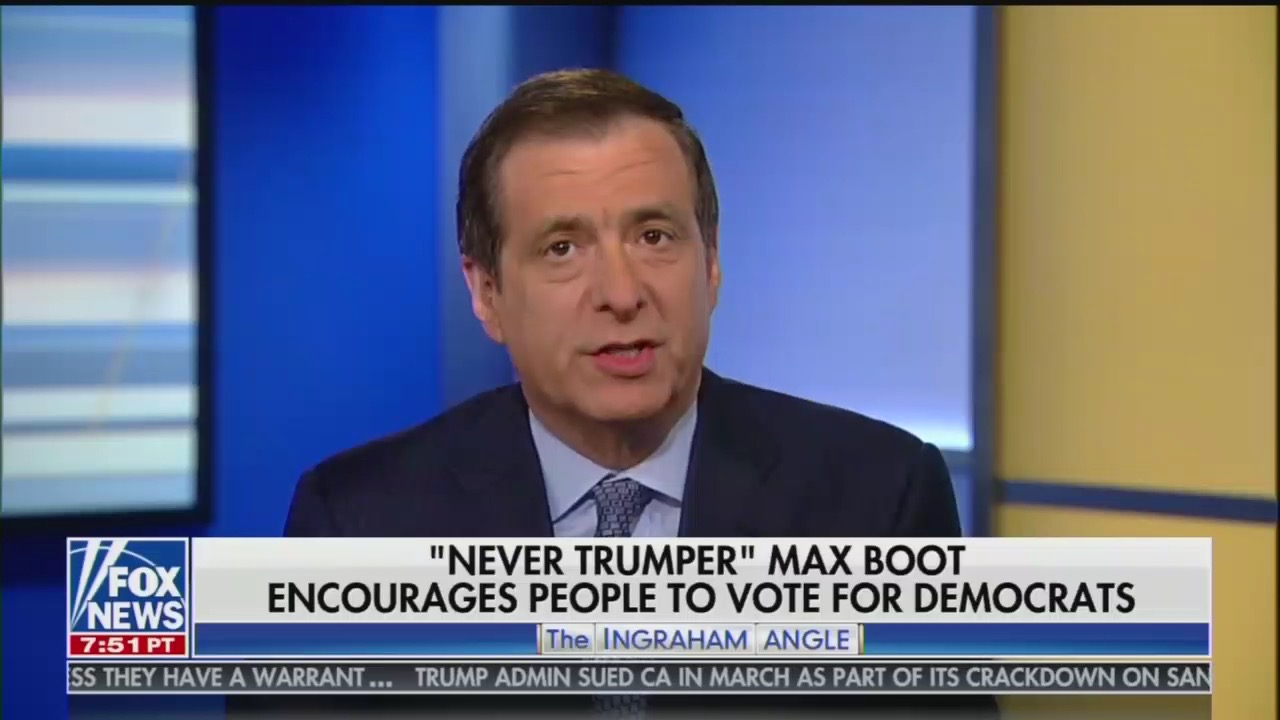 Fox News Channel MediaBuzz host Howard Kurtz appeared on The Ingraham Angle July 5 to talk about the recent bout of Never Trump Republicans like Steve Schmidt and Max Boot appearing on cable news, disavowing their party over the president. A longtime media critic, Kurtz expressed amazement at the hysteria over Trump from the right which was almost worse than what is seen on the left. ”It’s hard not to notice these defections bring them favorable publicity,” Kurtz critiqued.

Fox and Friends Host Pete Hegseth was filling in for Laura Ingraham on last night’s show with Kurtz. He opened the segment by hyping how Republicans against the president were becoming so desperate that they were saying insane things on television just to remain relevant.

“Never Trump conservatives are becoming so marginalized there are resorting to utterly desperate tactics to avoid irrelevancy,” Hegseth observed, playing a clip from last December of Max Boot ranting about Trump on MSNBC. The Fox host added beforehand that he had always thought of Boot as a “thoughtful guy” before this.

[VIDEO] BOOT: I devoutly hoped that every single Republican running for election next November loses. We cannot count on this Republican party to hold Donald Trumps of the world accountable. They have just shown that they have no willingness to uphold the constitution and their oaths of office. So The only way we will get accountability in Washington is by electing Democrats.

“Wow. These Never Trumpers may be even more hysterical than Democrats now!” Hegseth gushed. Introducing Kurtz he asked, “What you make of the increasing rhetoric, anti-Trump rhetoric, from Never Trumpers?” Kurtz agreed that he had always respected these guys, and understands their perspective to a degree, but to openly root for the other party makes them look absurd, desperate for attention, and publicity.

"it’s hard not to notice that these defections bring them favorable publicity. MSNBC contracts, and new respect from the left," he noted:

Well I get that Max Boot and Steve Schmidt and George Will who, I've respected for years, are upset because they think that President Trump has ruined their vision of the G.O.P. But it is a bit hard to grasp how they are now openly rooting for Democrats saying that they have spent their whole career opposing them as the party of big government, big spending, weak foreign policy It is hard not to notice--I’m not saying that this is their motivation--but it’s hard not to notice that these defections bring them favorable publicity. MSNBC contracts, and new respect from the left. [laughs]

Hegseth noted how Laura Ingraham always says that these Republicans are upset at losing their seat at the table, so they’re turning the table over. “[But] to say that vote for Democrats, I can't add it up!” he gushed.

Kurtz agreed, calling the “overheated rhetoric” from Will, Boot and Schimidt, comparing our country to our WWII enemies and white nationalists, “troubling.” He added that this group wasn’t having much sway with people on the right anyway, considering President Trump’s high approval rating within the party:

I understand from their point of view, they still feel they’re conservative, and President Trump is taking the party in a different direction and that’s fine. What troubles me in saying root for Democrats, some of the overheated rhetoric. For example, i a column just the other day, Max Boot wrote, The G.O.P. Has become a white nationalist party. with the conservative fringe. He has also compared it to post-war Germany and Japan.Needs to be destroyed so it can be rebuilt. I think that betrays how much they hate this president. Also, the columns aren't having much of an impact on actual voters. You look at the numbers, Trump is enjoying a record 90% approval among Republican voters. They are in an echo chamber.