Washington Post feature writer Eli Saslow, best known to NewsBusters readers as the guy who gushed over Obama's "chiseled pectorals" as he prepared to be president, wrote a heart-tugging profile of a 12-year-old Ohio boy whose illegal-immigrant mother was detained after 19 years in the country. Alex Galvez, born in Ohio, was being cared for by Estefany, his 18-year-old American-born sister.

ESPN, not content to cover sports, wants in on the burgeoning social-justice market as well. In “Waiting for LeBron," an ESPN magazine essay, Washington Post reporter Eli Saslow pondered why Cleveland Cavaliers basketball legend LeBron James backed off his brief anti-gun activism. Saslow’s histrionic analysis of James “the athlete and the activist” makes it clear that LeBron has (somehow) let both a grieving father and his home city down, by only going halfway in fighting racism and police shootings and gun violence in general, while noting in a single sentence that James, who lives in a gated mansion surrounded by bodyguards, likes to fire guns himself.

Gwen Ifill Shames Critic of PBS Bias: Surely, If You Watched, 'Even You' Would Disagree With Yourself

In an online chat on PBS on Thursday, NewsHour and Washington Week anchor Gwen Ifill did the usual song and dance avoiding any admission of liberal tilt.

Someone named “Darius” pressed Ifill: “Why does PBS overdo the PC mentality so much? Especially in the face of reporting hard, substantiated news?” She couldn’t possibly agree. He must not be watching regularly:

The Washington Post has a funny way of defining “news.” It just keeps selling the same old story of shooting victims lobbying for gun control. On the front of Sunday’s paper, the headline was “Exposing their scares, hoping to rouse a silent nation.” That headline is simply wrong. The "silent" nation spoke, and liberal gun-control wishes lost.

But the Post’s Eli Saslow went back to the bitter victim-lobbyists wandering the country on a bus funded by Michael Bloomberg's Mayors Against  Illegal Guns, who are now desperate to show graphic images of death and make Americans feel miserable:

Sunday's Washington Post seemed to arrive about two months late with a dominating front-page story on mourning Newtown parents Mark and Jackie Barden. Much of the Eli Saslow story was a heart-breaking account about the aftermath of their son Daniel's death in the grade-school rampage.

But the Post also wanted to drive home the anger that Newtown did not create a gun-control victory for Obama and the Bardens, as Mark introduced the president on April 17, when Obama called it a "pretty shameful day" that the gun-rights advocates had won. "Gun culture was extreme," Barden thought, and it couldn't be moderated.

A lengthy – 3,500 word – anguished expose on the front page of Sunday’s Washington Post, “Hungering for a new month to begin,” about how people in Woonsocket, Rhode Island race to the grocery stores on the first of the month to spend their Supplemental Nutrition Assistance Program (SNAP) payment, yet run out of food long before the month ends, didn’t offer a word about President Obama’s responsibility for the poor economy.

Deep in it, however, reporter Eli Saslow undermined his case when he sympathetically cited “a series of exhausting, fractional decisions” a couple with two toddlers face over having to choose between food “or the $75 they owed the tattoo parlor.”

The Washington Post rendered itself indistinguishable from the White House publicity effort on Wednesday. At top center of its front page was an article by reporter Eli Saslow -- the man who hailed Obama's "glistening pectorals" in 2008 -- on the letters President Obama reads from, and writes to, average Americans.

Under a photo of unemployed Michigan woman (and Obama voter) Jennifer Cline, the gooey headline was "Dear Mr. President...A Michigan woman wrote to Obama about her life. And he responded."

Saslow underlined the usual Obama trope about how he reads 10 letters from Americans every day, and they are considered "among his most important daily reading material, aides said." Cline found out just how wonderfully responsive the president was:

Washington Post Ties Iowa Protester to Violence, Even Though He Wasn't

As President Obama went to Iowa City March 25 to campaign for his already signed health care “reform” bill, he was greeted by non-violent, but angry protesters.

Eli Saslow of The Washington Post profiled one of those protesters on March 26. That man, Randy Millam, did nothing violent at the rally, yet Saslow referenced “death threats” and brick throwing in his article.

Saslow, who was named an Obama “slobberer” by media critic Bernard Goldberg, followed Millam, a rural Iowan, who made the trek to Iowa City to join people protesting at the president’s speech. He brought an American flag, a homemade sign that read “Chains We Can Believe In” and a megaphone. He also wore a cap with the Second Amendment written on it. 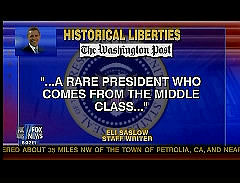 File under: you read it here first. “The Washington Post ignored a few historical facts when it proclaimed in a front page article Wednesday that President Obama is quote, ‘a rare President who comes from the middle class,’” FNC’s Bret Baier pointed out during his Thursday “Grapevine” segment. Baier explained what escaped Post reporter Eli Saslow:

There have actually been many Presidents who hailed from the middle class. Lyndon Johnson was born in a small farmhouse and worked his way through college. Harry Truman worked for the railroad and lived in hobo camps. Richard Nixon's parents ran a grocery store. Ronald Reagan was born in a small apartment above a bank in Northern Illinois. His father was a salesman. And Bill Clinton was born to a widow in Hope, Arkansas.

Baier quipped: “So, maybe not so rare.”

Washington Post reporter Eli Saslow (of "The sun glistened off his chiseled pectorals" fame) is back on the Obama beat and on the front page Wednesday, with a story headlined "A middle-class president's paradox." Some think Obama's an elitist. Imagine that.

But do they have fact-checkers? Saslow wrote:

His first year in office was defined in part by a paradox. He is a rare president who comes from the middle class, yet people still perceive him as disconnected from it.

Hard-left "anti-war" protesters – so far to the left that they’re protesting Barack Obama – were awarded the top left of The Washington Post on Wednesday. This "event" protesting the eighth anniversary of war in Afghanistan not only topped page one, it covered about 75 percent of page A6, including four color photographs.

Eli Saslow, the young Washington Post reporter best known for his giddy promotion of Obama’s "glistening pectorals," touted Obama as a "powerful new ally" against "Islamophobia" on the front of Wednesday’s Style section. The protagonist of Saslow’s story, Aida Mansoor of Hartford, Connecticut, tries to educate an apparently (and painfully) bigoted America about Islam. This is where Obama comes to the rescue:

Her attempts at cross-cultural connection can sometimes feel futile, Mansoor says, but her energy this year has been fortified by a powerful new ally: President Obama, a Christian who has promised unprecedented outreach to the Muslim world. More than 85 percent of Muslims in the United States approve of Obama's performance as president, according to a recent Gallup poll, which is his strongest endorsement from any religious group.

"What he says could go a long way toward dispelling the myths," Mansoor says. "For a long time, Muslims have been the bad guys in this country. There is so much hate and misunderstanding, and he might be able to help the world overcome some of it."