On Election Day 2010, then-CBS Early Show anchor Harry Smith posed a hypothetical question about newly-elected Republicans to Ann Coulter: “There’ll be a routine vote, for instance, to increase the debt ceiling and the Tea Party guys are going to say, ‘Over my dead body,’ and the government comes to a screeching halt. Then what happens?” The conservative author confidently predicted: “Well, the media will blame the Republicans.”

And that’s precisely what has occurred. A Media Research Center study of the Big Three network evening and morning programs finds that, when it came to assigning blame for lack of a debt ceiling resolution, ABC, CBS and NBC’s coverage has placed the overwhelming majority of the blame on Republicans’ doorstep.

Appearing on Saturday's NBC Today, CNBC's John Harwood solely blamed House Republicans for the ongoing debt ceiling gridlock: "Speaker Boehner and President Obama, were negotiating in good faith. They wanted a deal....the House Republican caucus...would not accept what President Obama needed to make a deal, and that is real and significant tax hikes as a component."

Harwood argued conservative House members were intimidating Boehner and declared: "That's why Boehner left the talks. That's why the United States' risk of default, while still low in my opinion, is higher than it was 24 hours ago." Later, Harwood touted how "Independents are starting to side with Democrats" and proclaimed: "House Republicans are not playing politics on this. It's crazy politics, what they're doing, and Republican leaders think it may hurt the party. But it's what they believe, and that's why we're at this point."

NBC's 'Today' Wonders Why Americans Are 'Obsessed' With Breasts, Then Shows Breasts 54 Times

Monday's NBC Today decided to devote a six-minute segment in the 8 a.m. ET hour to America's "obsession" with breasts, with co-host Ann Curry declaring: "...they have become an object of sort of undue fascination." As the report was teased throughout the broadcast and during the segment itself, 54 pairs of breasts appeared on screen, with some images repeated.

Update:  It turns out that in the 9 a.m. ET hour, the show also featured a fashion segment with several female models displaying different types of bras.

The irony of doing a segment filled with images of breasts while asking why people were obsessed with them seemed to be lost on NBC reporters and pundits as they decried the amount of attention given to that part of the female anatomy. Fill-in co-host Lester Holt referred to it as a "tempest in a C cup." Correspondent Amy Robach reported: "Just how much are breasts on the human mind? A quick Google for them, paired with 'boobs' and the slang word starting with a 'T,' turns up almost a billion hits."

NBC Touts SUVs as Among Safest Vehicles to Drive

NBC's Saturday Today show ran a piece recounting recent car safety tests which find that large vehicles like SUVs are among the safest vehicles to drive. The same vehicles that used to receive much negative attention from the media because of rollover accidents and lower fuel efficiency seem to have seen improvements in the likelihood of rollovers. NBC correspondent Tom Costello on Saturday gave a positive review of SUVs and other large vehicles. Anchor Amy Robach introduced the report citing "surprising findings" of safety tests.

Costello soon informed viewers: "The Insurance Institute for Highway Safety reports today the overall safest vehicles on the road are minivans, with 25 deaths per million registered vehicles. SUVs are close behind with 28 deaths per million vehicles. And that's a surprise since just a few years ago, SUVs were prone to rollovers and considered dangerous."

The so-called ‘news’ media have zero currency in this debate because we have documented the Left using hateful, vicious language far worse than any conservative. Their attacks on conservatives are untrue and utterly hypocritical. If they really cared about the effects of political rhetoric, they would have gone after any number of those left-wingers who have directly incited violence – starting with the man with the world’s biggest audience: President Obama. After all, he did say, "If they bring a knife to the fight, we bring a gun."

But that would be a ridiculous charge. And besides, the media aren’t really concerned about violent rhetoric. This is part of a much more insidious and calculated campaign to criminalize conservative thought.

Next they will ramp up support to regulate free speech on radio airwaves and the like. They want to illegalize opposition to liberal thought and are willing to accuse, indict and prosecute anyone who stands in the way of that Socialist goal.

Here are some lowlights of the left-wing media’s death wishes: 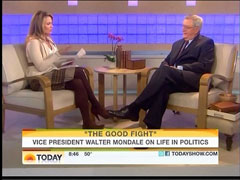 Former Vice President Walter Mondale appeared on Monday's Today show to plug his new book, The Good Fight, and NBC's Amy Robach asked the failed 1984 presidential candidate if he had any advice for Barack Obama, as the midterms approach, as she asked: "A lot has been compared to President Jimmy Carter's presidency to President Obama's" and recalling Mondale's run against Ronald Reagan: "Do you think that President Obama and Democrats are facing a similar situation come November?" For his part Mondale advised that Obama should get rid of his teleprompters or "idiot boards" as he called them because as "smart as he can be, he needs to talk right into that camera and talk to people because people are hurting."

The following is the full interview as it was aired on the October 4 Today show:

MSNBC’s Brzezinski Swoons Over Wacky Flight Attendant: ‘I Think I Love Him,’ ‘Dreams’ of Imitating Him 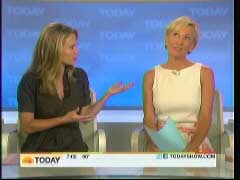 Was MSNBC’s Mika Brzezinski just joking or was she channeling some actual frustrations with her employers at MSNBC? As Brzezinski sat in as a guest co-host of Saturday’s Today show on NBC, she repeatedly joked about admiring Steven Slater, the flight attendant who quit his job at JetBlue by erratically bailing out of his plane down the emergency chute holding two beers. While co-host Amy Robach admitted that she was "getting sick of this story," Brzezinski had only just heard the story because she had been vacationing the past week. Reveling in her fascination with Slater, she made such declarations as, "I feel his pain," "I think I love him," and, "I have dreams about doing that actually."

Although at one point she referred to sometimes being annoyed at unruly airline passengers as a reason for sympathizing with him, she also twice joked about jumping out of the window of the NBC studio at 30 Rock. At the top of the show, she jokingly predicted, "I might jump out the window with a beer. You never know." During a plug later, she mused: "Two beers, I love him. It's my dream just to, like, right outside the window of 30 Rock. What do you think? On an escape hatch." 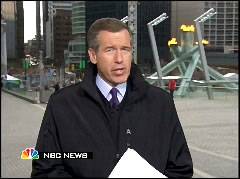 After the Democrats regained control of the House in 2006, Nancy Pelosi promised NBC's Brian Williams that she would "drain the swamp" and "turn this Congress into the most honest and open Congress in history." So when news broke that a House Ethics committee found that long time New York Democratic Congressman Charles Rangel accepted corporate money for trips to the Carribean one would think Williams would be all over the story – he wasn't.

On Thursday's NBC Nightly News Williams completely ignored the charges, as did ABC's World News Tonight. Of the three broadcast network evening news shows, only Williams' competitors at CBS Evening News covered the Rangel scandal as Katie Couric reported Rangel "broke House rules," and Nancy Cordes told viewers he could be "censured," but didn't tell them that he was a Democrat.

[UPDATE, 7:30 PM EST Friday, February 26: ABC's World News caught up with Rangel on Friday night as anchor Diane Sawyer identified him as a Democrat and the Friday NBC Nightly News rolled Rangel into a “Democrats' Disarray” story with Desiree Rogers and David Paterson.]

Williams' NBC News colleague Amy Robach did mention the investigation into Rangel's wrongdoing, the next morning on the Today show, but omitted Rangel's party affiliation in the one and only story aired on the morning show: 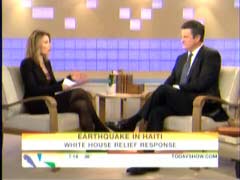 On Saturday’s Today show on NBC, anchor Amy Robach brought aboard MSNBC’s Joe Scarbarough to talk about President Obama’s handling of the relief effort in Haiti, and the President’s efforts to prevent Republican takeover of the Massachusetts Senate seat formerly held by Ted Kennedy. Robach introduced the segment referring to the possibility of a Democratic loss of the seat from Obama’s point-of-view of being a "potential political crisis here at home."

After Scarborough answered her first question about relief aid in Haiti -- at one point complaining about "carping from the far right" -- Robach segued from the Haiti earthquake by referring to the Senate race as a "potential crisis looming here at home" which could result from a "historic upset" in Massachusetts. Robach:

NBC's Robach: 'Will [Palin] Ever Just Go Away?'

On the December 26 Saturday Today, as NBC anchor Amy Robach brought up Sarah Palin during a segment on people who made the news in 2009, Robach sounded as if she might have had a wish that Palin disappear from public view as she asked if Palin would "ever just go away?" Robach: "And, Brian, another big political story, the rise and fall of Sarah Palin, and yet she continues to grab headlines. Her new book came out. Will she ever just go away? Do you think she's going to be a big force this next year?"

Robach, possibly hinting that she also sees Palin as either a good source for humor or for the news industry which she is a part of, followed up by posing a question to NBC contributor Toure. Robach: "And, Toure, do we really want her to go away? Probably not."

Below is a transcript of the relevant portion of the December 26 Saturday Today show on NBC: 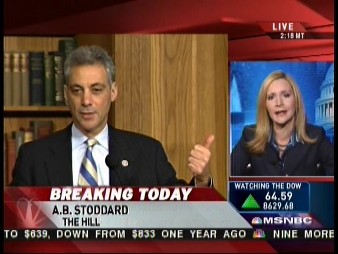 Which would be the safer place to be for a political figure who's received death threats?:

a. A school concert in a public venue.
b. A press conference in the company of the President-elect of the United States of America.

If you answered 'b,' you're thinking like me and presumably most people. If you answered 'a,' you're A.B. Stoddard.  The associate editor of "The Hill" offered up the strange excuse that death threats are preventing Rahm Emanuel from attending press conferences in the course of an MSNBC appearance this afternoon during which she also claimed that "President-elect Obama is taking steps to be as forthcoming and as open and as transparent as he promised he would be."

Despite "Today’s" earlier praise of Sarah Palin’s debate performance, Amy Robach managed to assemble seven "undecided voters" (and reported that five voted for Bush) who did not express high opinions of the Alaska governor. On the October 3 edition, Robach found women voters she identified as undecided and from key battleground states. Although the discussion began with two of the women offering positive remarks about Governor Palin, the positive feedback ended there.

Polling these seven women, Robach found "nearly every one" held a less favorable view of Sarah Palin after viewing the debate. One voter claimed Palin "has sealed the deal for me" and she "is in no way ready...to be vice president." Another "made up [her] mind" because "Palin didn’t do it for me." Curiously, one "undecided" voter wanted a candidate that would "end the war" and because of Biden’s promise she was swayed to the Obama/Biden ticket.