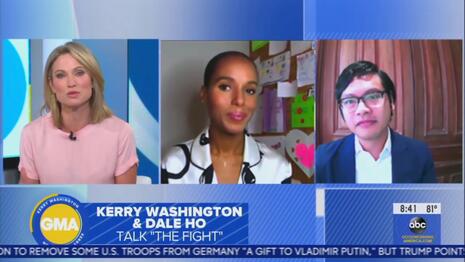 As if the ACLU hasn’t had enough money and clout handed to them by Hollywood and the media, ABC spent time gushing over a new documentary on the left-wing group called The Fight, produced by Scandal star Kerry Washington.

Co-anchor Amy Robach fawned over the behind the scenes look at court cases calling it “fascinating.” She asked Washington, who was there along with ACLU lawyer Dale Ho, who stars in the film, to share what viewers will “take away” from the anti-Trump administration film.

Washington bubbled over with enthusiasm for the legal group that’s hell-bent on stopping Catholic hospitals and Christian charities from helping people. She gushed they were our real-life superheroes or Avengers “in the trenches” fighting for our rights against the Trump administration:

Yeah, I mean I think it's two-fold. I think these guys are so inspiring. I mean you really look at the last four years how they have been in the trenches fighting for civil rights and civil liberties for every single American with attacks on our civil liberties coming from this administration and they really are fighting this fight. They are -- to me they are like our real-life “Avengers.” They are real superheroes and to see that fight is so inspiring…

The media’s sure got a thing for calling leftists superheroes lately. Was this quip even unscripted considering ABC’s parent company, Disney, owns Marvel?

Washington went on to share her hope all Americans follow the ACLU’s example and fight for liberal causes:

That we each could as they do figure out how to make change in our little circle of the world. It's so, so inspiring what they do and I -- my hope is people walk away asking themselves like how can I be a part of the fight for all of us?

George Stephanopoulos was excited. “Boy, I cannot wait to watch!” he declared to close out the interview.

This nauseating PR segment for the ACLU was brought to you by Toyota and Honda.