ABC Eager for US to Follow Australian City’s Super Strict Lockdown: ‘A Predictor of What’s to Come?’ 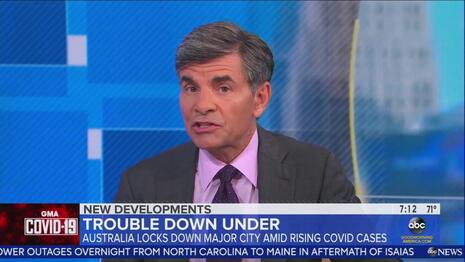 On Good Morning America Wednesday, the ABC journalists seemed eager for the United States to follow Australia’s example, after one major city implemented a strict lockdown after COVID-19 cases rose dramatically. In the tease leading up to the report, co-anchor Amy Robach hyped, “Australia imposes one of the strictest lockdowns on Earth, as a major city there faces a second wave. What it could mean for a second wave here in the U.S..”

Anchor George Stephanopoulos kept that theme alive leading into correspondent Matt Gutman’s report. After fretting about schools expecting to shut down in the Fall due to outbreaks, Stephanopoulos touted how Melbourne’s lockdown was “raising new questions about the course of the pandemic in our country.”

Gutman explained how the city of Melbourne in Victoria, Australia has gone back to a very strict lockdown because it has faced a second wave of the virus. Everyone is required to stay inside their homes and only allowed one hour of outdoor exercise a day and one essential grocery shopping trip a day. People face heavy fines if they break the rules:

GUTMAN: The hard-hit state of Victoria declaring a state of disaster. Victoria reported three new cases of the virus, today it's 725. Australia, which once seemed to have COVID under control, now taking what officials call a shock and awe approach to contain the surge of cases. Enacting stage 4 restrictions in Melbourne, that means an 8:00 P.M. To 5:00 A.M. curfew. Just one hour of outdoor exercise and only one household member allowed out for shopping. An official said where you slept last night is where you'll need to stay for the next six weeks.

“We just heard about those extreme measures being taken now in Australia. The question is do you think we're looking at a similar lockdown here eventually? Is this a predictor of what is to come?” she gushed.

The doctor noted we have many more cases than Australia does, and he didn’t expect us to “do anything quite that serious,” before adding: “ I think Australia is a warning of what might be ahead of us in the Fall and Winter,” in terms of higher COVID numbers.

There was further evidence later in the show that ABC appears to want to put the country in a nationwide lockdown while at the same time, hoping things don't get better. After anchor George Stephanopoulos asked ABC’s Dr. Jennifer Ashton what parents should say when their kids ask if they will have to be wearing masks “for the rest of their lives,” she gave this alarming answer:

STEPHANOPOULOS: Let me ask you a question that my daughter asked me the other day. She turned to me and said “will we be wearing these masks for the rest of our lives?” How would you answer that?

DR. ASHTON:  I would say, smart question from your daughter. No one has a crystal ball. We don't know. We've never been in this situation before, but for the indefinite future, we have to take advantage of all tools in our tool box. It's a low risk, likely high benefit thing we can all do, not just to protect ourselves, but for the common good and protect those around us and that is an incredibly empowering message to send to kids of any age.

This is such a hopeless response to give, considering the United States has faced multiple outbreaks before, including the Spanish Flu of 1918 where masks wearing rules were applied in some parts of the country, and life eventually returned to normal. But like many media outlets, ABC has been actively rooting for the economy to tank, while families and businesses suffer. GMA journalists blamed business owners who reopened to feed their families as responsible for coronavirus spikes, while excusing  left-wing protesters flouting lockdown and mask-wearing mandates. They portrayed Democrat politicians who made horrific decisions as heroes, while calling steps taken by President Trump to stop the virus, “xenophobic.” Additionally, journalists at ABC have done everything in their power to discount potential treatments for the virus if the president supports it.

This latest example of the media rooting for ruin was sponsored by Swiffer and Dick’s Sporting Goods. Their contact information is linked above.