President Who? Networks Devote 23 Minutes to Inflation, 85 Seconds on Biden 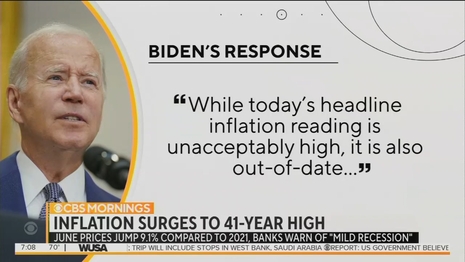 The networks are still doing their best to protect Joe Biden. Devastating new inflation numbers arrived on Wednesday, showing the rate soar to 9.1 percent, a 41 year high. And while the networks all covered that new number for 23 minutes and four seconds on Wednesday night and Thursday morning, they allowed just a scant 85 seconds on the President’s responsibility.

Even when Biden’s name came up, it was often defensive. Today co-host Savannah Guthrie on Thursday wondered if we should focus on the “incremental progress”  Biden has made:

The administration said that 9.1 percent figure obviously is stunning, but gas prices have fallen 40 cents in the past month. That's true. Are these numbers in any way not reflecting this incremental progress that, say, the White House is pointing to?

Here’s how the numbers broke down: On ABC’s World News Tonight and Good Morning America, journalists devoted seven minutes and six seconds to the inflation numbers. Of that, just 32 seconds mentioned Biden. The CBS Evening News and CBS Mornings offered five minutes and 45 seconds on the bad news, but only 19 seconds of the segments were on the President.

NBC Nightly News and NBC’s Today totaled the most inflation coverage: Ten minutes and 13 seconds. But just 34 seconds of that mentioned Biden.

On Thursday’s Good Morning America, the entirety of the Biden mention came in just two sentences from Mary Bruce. Talking about the President's trip to Israel, she noted, “Of course, domestic issues are also weighing heavily here. The President responding to those alarming inflation numbers calling it unacceptably high, but also downplaying the report saying it doesn't account for declining gas prices.”

On CBS Mornings, Adriana Diaz repeated Biden talking points: “In a statement Wednesday, president Biden called the inflation numbers unacceptably high, but added the figures were out of date given the recent drop in gas prices.”

To be sure, all three networks portrayed the skyrocketing inflation as bad news for the country. For instance, GMA’s Amy Robach warned, “We turn to the latest on soaring inflation. Worse than expected in June, prices up 9.1 percent over the past year. That is the highest in nearly 41 years. In some areas of the country, the inflation rate is above ten percent.”

But, like all the networks, she tried to look on the bright side. Referencing falling gas prices, Robach added, “How the Federal Reserve may respond and why it's not all bad news.”

When it comes to the latest terrible news impacting the country, one thing is certain: The networks want you to forget who is President. And if you do remember, definitely don’t blame Joe Biden.

ABC's burying of Biden blame was sponsored by Apple and Target. Click on the links to let them know what you think.