And, on the latter’s show, the president and vice president of the teacher’s union lashed out at the blowback as “suspect” thanks to “the MAGA media” even though they believe the policy to cut down white teachers for no other reason besides being born white “doesn’t go far enough.”

Good Morning America set the table with fill-in co-host and chief White House correspondent Cecilia Vega stating this in a tease: “Teacher uproar. One school district's controversial move to lay off white teachers before minority ones regardless of tenure. Could the policy's attempt to correct past discrimination cause even more? What both sides are saying this morning.”

Vega set up correspondent Ike Ejiochi’s piece by adding that the language was done as part of “[a] new city contract with the teachers union says that, in the event of layoffs, white teachers could be let go, regardless of seniority in order to keep minority teachers in the classroom.”

According to the school district, they insist the policy of laying off white teachers was done to both “remedy the continuing effects of past discrimination” and “support the recruitment and retention of teachers from underrepresented groups.”

After a brief soundbite of Upper Midwest Law Center’s James Dickey pointing out the fact that the Supreme Court hasn’t looked kindly to such blatant discrimination, Ejiochi turned things back to the positive with gaslighting from a far-left university professor and two Black teachers (click “expand”):

EJIOCHI: Special interest groups say, in 2020, students of color and Native Americans made up 35 percent of Minnesota's K through 12 population, but only four percent of the more than 63,000 teachers in the state were people of color.

METRO STATE UNIVERSITY’s PAUL SPIES: But in Minneapolis, there's that gap between the diversity of students and the diversity or lack of diversity of their teacher. This is not about trying to pit one racial group of teachers against another. [SCREEN WIPE] This is about serving students the best.

EJIOCHI: Several black educators in Minneapolis in agreement with the contract.

LINDSEY WEST: When they see somebody who looks like me and maybe looks like them, they feel a greater sense of connection and belonging in that community.

Over on GMA3, co-host Amy Robach began her interview by lobbing a softball at Minneapolis Federations of Teachers President Greta Callahan to “explain further why both the school district and the teacher's union felt that this was an important and necessary change.”

Callahan immediately made her far-left, pro-indoctrination mindset known as she insisted such a policy to stiff white people like herself would be in keeping with their “our number one priority” of doing “what is best for students” and ensuring there are “people in front of them who...they can...see themselves in.”

She then insisted the move was something teachers are “extremely proud of...but it also doesn’t go far enough” and rather was “one tiny, minuscule step” toward a proper education system. 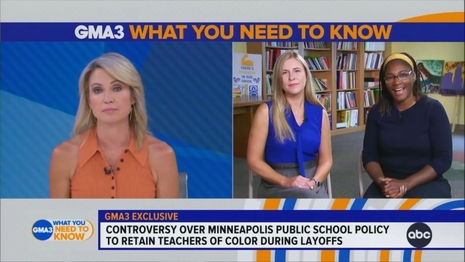 Robach went to Vice President Marsha Howard with a question about why the language agreed to in March was in the news months later.

Howard said it was “very suspect” and then also showed her venom for conservatives and parents: “[N]ow it's coming out because some Minnesotan website decided to put it out there and the MAGA media picked it up and they were waiting for mainstream media to run with this story.”

Robach countered that ABC has “been reporting on and talking about a teacher shortage” before pivoting back to showing them sympathy (click “expand”):

ROBACH: And I want to follow up, Greta, because you mentioned the discrepancy in representation. The numbers are — are undeniable. The school district reports 65 percent of students in the past year are people of color while just 30 percent of the teaching staff are people of color so obviously, the intent is to reconcile those numbers, but critics are saying it's discrimination. It’s unconstitutional. Are you concerned — this doesn't go into effect until spring 2023. How are you concerned that litigation may undo what you-all have decided?

CALLAHAN: Our concern is what is best for students. Right now we have kids who are sitting in lunchrooms being supervised because they don't have enough teachers in front of them to teach them. Our concern is what is best for them and that's why we went on strike for recruitment and retention of educators who represent our students and smaller class sizes and more mental health support and higher pay because those are the things will ensure our students have the education they deserve and right now, they are not receiving that, so no, that is not one of my concerns at all whatsoever and we welcome any challenge to it.

ROBACH: All right, that was a very strong statement. Marsha, you're a teacher and educator. What do you say to the critics that say this treats the long-time more senior teachers unfairly?

HOWARD: I've been teaching for about 24 years and I started in a school that was over 60 percent black and for many, many of my students, I am the only educator that they had in 12 years that looked like me...[T]he part that is the issue is that our students deserve to have intellectual and academia being represented by people who are under-represented. African Americans, indigenous folks, people of color. They need to...[F]rankly, in this district, they not [sic] paying us enough...[F]olks need to come off some money. Billionaires need to start giving what they're supposed to be giving to this state in order to fund education so that we can get some parity and actually attract people to this profession again.

Callahan closed by doubling down on how only giving job stability to non-white teachers was only the beginning, warning that “it doesn't go far enough” and “we need to continue to take this further.”

Instead of show skepticism or horror, Robach gushed over their radicalism: “What you both are saying I know is resonating with so many people watching. We appreciate your passion. We appreciate your purpose and your time for being with us today to clarify all of that, to take on that controversy[.]”

This liberal media-endorsed racism and showcasing of deranged leftists was made possible thanks to the backing of advertisers such as Flonase (on GMA3) and Honda (on GMA). Follow the links to see their contact information at the MRC’s Conservatives Fight Back page.

To see the relevant transcripts from August 19, click here and here.