During the first segment, the MRC president had the following answer on whether Oprah's support actually helped Obama: "It did help him out, you know -- incoming memo, she's a liberal who supports Barack Obama. Everbody knew it." He pointed out how daytime host wouldn't have Sarah Palin on as a guest. He also highlighted how Hollywood supported Obama financially, but Obama was disciplined enough to minimize their public support. 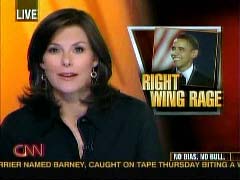 CNN anchor Campbell Brown introduced a segment on Thursday’s Election Center program by contrasting the "[p]eople all over the world dancing in the streets" over the election of Barack Obama to the "really, really angry" reaction of conservatives, which she then labeled "right-wing rage." A graphic with the same label flashed on-screen, accompanied by a picture of Obama smiling.

During the segment, which aired just after the bottom-half of the 8 pm Eastern hour of the CNN program, CNN correspondent Joe Johns played an audio clip of conservative talk show host Rush Limbaugh as an example of such "rage." Limbaugh, who reacting to the appointment of liberal Illinois Representative Rahm Emanuel as Obama’s White House Chief of Staff, called Emanuel a "good old-fashioned Chicago thug, just like Obama is a good old-fashioned Chicago thug," and gave an anecdote about how Emanuel used a steak knife to demonstrate his own anger towards Bill Clinton’s enemies after the 1992 election. Johns’ reply after the clip: "So if you were thinking the country is now unified, think again. There are still deep divisions." 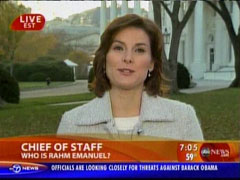 In 2006, his rank was only four. In contrast, the House member's average from the liberal group Americans for Democratic Action is a very high 96. And yet, Shipman erroneously asserted, "More than anything, the 48-year-old Illinois representative is a pragmatic, centrist politician who likes to get things done. Clearly, Obama wants the same thing." So, can Americans expect Obama to be the same type of "centrist" that Emanuel has been?

Shipman is not the first journalist to try and spin the aggressive Illinois congressman as a moderate. On Wednesday's "American Morning," CNN special correspondent Frank Sesno described Emanuel as someone who is seen to be "on the center to center-right."

Bill Clinton brought jazz, Rhodes scholars, a slice of Arkansas and all-night pizza policy sessions. When George W. Bush arrived, Texans took over the town. Blue jeans were out; coats and ties and cowboy boots were in.

Sounding like a voice-over on a movie trailer for an upcoming action blockbuster starring Barack Obama, Chris Matthews greeted viewers, on Thursday's "Hardball," with this exclamation: "The excitement begins! Barack Obama makes his first major appointments." Matthews then continued his giddiness, a little later in the show, when he raised up an electoral map, published in the New York Times, that featured a "sea of blue" for Obama and hailed: "This is maybe the best map ever seen!"

The following exchanges occurred on the November 6, "Hardball":

Terry Moran on Obama Celebrations: 'the Jubilation,' 'the Pride' 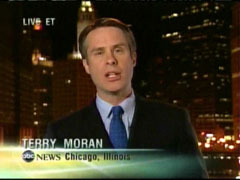 "Nightline" reporter Terry Moran extolled Barack Obama's victory celebration on Wednesday's program and insisted that "so many people greeted this election as a human rights milestone and a repudiation of the deeply unpopular President George W. Bush." Reporting from Chicago, the site of Obama's victory celebration, Moran reflected on "the echoes of this moment when America astonished itself and the world again."

Musing about the night, the journalist cooed, "No one who was in Grant Park in Chicago last night will ever forget it. The jubilation. The emotion. The pride." Moran, who has been fawning over Obama for two years, described the election as "a political earthquake, and a moment in American history that millions of people around the world celebrated." He later glowingly elaborated, "People across the world joined the party, seeing in the triumph of Barack Obama, the American capacity to achieve the unthinkable."

The Emanuel-Freddie Mac Connection: Will the Media Report It?

Emanuel, who was a senior adviser for former President Bill Clinton throughout the 1990s, was appointed to the board of Freddie Mac upon his departure from the Clinton administration.

Fineman: Obama Brings 'Excellence,' Is 'Changing Everything as He Moves' 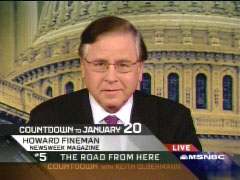 Catching up with Newsweek's Howard Fineman on Wednesday's Countdown, he came across as a parody of an in-the-tank for Barack Obama journalist as he gauzily proclaimed: “Obama's changing everything as he moves. His victory speech last night in Grant Park...was so memorable on so many levels.” Asked by host Keith Olbermann to predict “an overarching theme” for Obama's appointments, such as “competency, bipartisanship, diversity, newness,” Fineman went beyond Olbermann and trumpeted:

This is an ironic choice for a President-elect who has promised to change Washington, make politics more civil, and govern from the center.

But it's not just Republican partisans who are noting Emanuel's hard-nosed, partisan politics. As the Reuters news wire noted in a November 5 article, "Emanuel would bring [a] tough edge to White House job":

Matthews: My Job Is To Make Obama Presidency a Success

Just in time for the new James Bond movie, Chris Matthews has earned himself a new moniker: Odd Job. Matthews says he sees his job as a journalist as doing everything he can to make the Obama presidency a success.

Appearing on "Morning Joe" today, Matthews was reluctant to criticize Rahm Emanuel's kabuki dance over accepting Obama's offer to be chief of staff.

The "Hardball" host (and presumptive candidate for U.S. Senate from PA) was equally unwilling to see the Emanuel episode as evidence of a lack of planning and discipline in the nascent Obama administration. Matthews eventually explained why.[H/t multiple NB readers.] 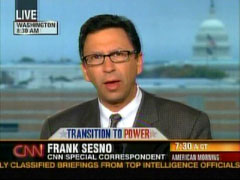 Beware the tendency for media liberals to paint the new Team Obama as a surplus of centrists. Just after 8:30 on CNN's American Morning, Frank Sesno declared that Rep. Rahm Emanuel, projected as Obama's chief of staff, is seen as "on the center to center-right." But that's not what his congressional voting records suggest.