As my NewsBusters colleague Scott Whitlock pointed out on January 9, networks such as ABC and CBS, slammed the president for a lack of diversity in his second term administration, particularly with women.  Whitlock wrote the “correspondent Jon Karl chided, ‘Well, some critics are looking at that emerging second-term cabinet and wondering, where are the women?’ He touted a New York Times article fretting about the "all-male look" of the new picks.

Oddly enough, concerns over diversity don't seem to be a problem for liberal Obama cheerleader and Washington Post In the Loop columnist Al Kamen.  Now, with some major news outlets slamming for his apparent abandonment of women within his inner circle, Kamen asks for us to view this within the context of ‘musical chairs’ in his January 11 post – with fellow WaPo colleague Emily Heil.

Earlier today, a grand jury convicted former Illinois Governor Rod Blagojevich, a Democrat, on 17 of 20 counts of corruption. 11 of of the guilty verdicts related to attempts to profit from the "sale" of the U.S. Senate seat Barack Obama vacated when he became president.

At USA Today's On Deadline blog (as of its 5:33 p.m. update), Michael Winter failed to identify Blagojevich or any other politician involved as a Democrat. Neither did the video found at Winter's article. This is not surprising, because the video came from the "see no evil Democrat" Associated Press.

In six items all carrying today's date found at the AP's main site in a search on the former governor's last name at 8:15 p.m. ET, the wire service not only failed to tag Blago as a Democrat, it failed to tag anyone as Democrat. Here's the list:

A news article written by a reporter at AFP and reproduced at such news sites as Google, Yahoo, NPR, the Dallas Morning News, and others, might qualify as an example of what happens when one allows opinion to seep into reporting.  Despite a mission statement involving claims that AFP coverage is balanced, accurate, and includes the other side of the story, this piece makes no secret of where the reporter’s bias lies.

The article features such gems as:

Most interesting was the inclusion of this possible 2012 campaign slogan:  “Though many of America's problems predated his presidency…”

Here is a short list of American problems since Obama took office:

Is Obama more 'hawkish' and yet more charming than his immediate predecessor?

Halperin believes that President Obama has been more cavalier than his predecessor, and Brzezinski thinks that although Obama has extended many of Bush's unpopular policies, he brings a different "characterization" to the table.

The panel harped on the irony of Obama receiving the Nobel Peace Prize despite his inexperience in the White House at the time (less than a year) and the fact that he has continued American wars overseas and started a third one in Libya. Liberals Mike Barnicle and Mika Brzezinski both admitted to having been taken aback by the 2009 decision to bestow the prize on the president in his freshman year in office. (Interestingly enough, this recalls an episode in 2009 when co-host Joe Scarborough mocked the Nobel committee's decision on the "Morning Joe" set.)

(Video after the jump. Comments from start until 3 minutes in.)

Obama Touts Fulfilled Iraq Pledge, But Withdrawal Deal Was Set Up by Bush

President Barack Obama told disabled veterans in Atlanta on Monday that he was fulfilling a campaign promise by ending U.S. combat operations in Iraq "on schedule."

But the timetable for withdrawing U.S. troops in Iraq was decided during the Bush administration with the signing of the Status of Forces Agreement (SOFA) by U.S. and Iraq officials on Nov. 16, 2008. The Iraqi parliament signed SOFA on Nov. 27, 2008.

The agreement, which had been in negotiations since 2007, set a timetable calling for most U.S. troops to leave Iraqi towns and cities by June 30, 2009, with about 50,000 troops left in place until the final withdrawal of all U.S. military forces by Dec. 31, 2011.

Financial 'Reform' Bill Has Provision Exempting SEC from Information Requests, Will Media Call Obama on It?

Fox Business is reporting that the Dodd-Frank financial reform bill that President Obama signed recently includes a provision that exempts the Securities and Exchange Commission from responding to Freedom of Information Act requests. Fox wrote:

The law, signed last week by President Obama, exempts the SEC from disclosing records or information derived from "surveillance, risk assessments, or other regulatory and oversight activities." Given that the SEC is a regulatory body, the provision covers almost every action by the agency, lawyers say. Congress and federal agencies can request information, but the public cannot.

Several years ago, the media was confronted by several similar issues involving attempts by the Bush Administration to narrow the provisions of FOIA and exempt certain agencies from having to respond to requests filed under that act. The question that remains in these next few days as the media reports on this story is weather their response will be as condemnatory as it was when George W. Bush was in office.

You would think in the wake of the problems with former Washington Post blogger Dave Weigel in addition to abandoned plans by the Post's publisher Katharine Weymouth to charge lobbyists and trade groups thousands of dollars for access "to top congressional and administration officials for $25,000 a plate" at a dinner party her home, the folks at the Post would be a little more careful with their ever-expanding empire of new media. But that's not the case.

According to a July 2 article posted on RawStory.com by Ron Brynaert, there is an undisclosed connection between the Obama White House and the Post. Brynaert notes in the Post's July 2 report from Ed O'Keefe, the whopping $38.7-million payroll of the Obama administration reveals there are three people that aren't taking a salary, which O'Keefe fails to name. One of those is Patricia G. McGinnis, "Advisor to the Obama White House on leadership programs for Presidential Appointees." But there is more to McGinnis, which Brynaert pointed out. (h/t mattsheffield)

"McGinnis' Georgetown biography notes that she "is the former President and CEO of the Council for Excellence in Government, where she created and led a number of innovative programs to improve the performance of government, during her 14 year tenure" and also ‘serves [as] a panelist and blogger for the Washington Post 'On Leadership' website.'" 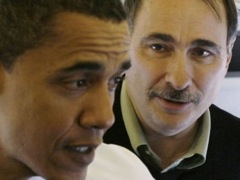 Buried in a recent New York Times profile of senior White House advisor David Axelrod was this nugget of information: he used to be a reporter with the Chicago Tribune.

The fact is hardly a secret -- the White House notes Axelrod's brief stint at the Tribune on its website. But that bit of information was an interesting element of a predictably laudatory profile. One of President Obama's chief message-men was a political reporter for a major newspaper. Who knows better how to address journalists than a former journalist?

For its part, the Times skipped over any discussion of the significance of Axelrod's experience in journalism. The paper simply noted his former position in passing. 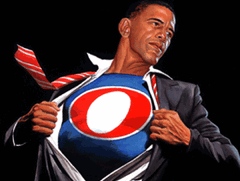 The Obama presidency is, for better or worse, the most media saturated administration in the nation's history. Due at least in part to revolutionary changes in the sharing of information, but equally abetted by the president's media-hungry personality and style of governing, Obama's face is just about everywhere these days.

And Americans have noticed. In an attempt to land a spot on a DC-based reality show, the so-called state dinner party-crashers, the Salahis, went where they knew the cameras would be: the White House.

The Obama administration has pursued a relentless media strategy by trumpeting the president on traditional and new media outlets at every opportunity. It's tech-savvy staff has allowed the president to market his message to a wide range of demographics. The strategy was a cornerstone of Obama's presidential campaign, and he has adopted it as a style of governing.

Essay: Where's All That Liberal Brainpower the Media Promised?

Einstein said the definition of insanity is “doing the same thing over and over and expecting different results.” That may be so, but it certainly is the definition of stupidity. Which is why the behavior of Obama administration and congressional liberals is so puzzling.

Wasn’t the Obama administration supposed to be populated by the elite of Ivy League intelligentsia, each cabinet secretary brighter than the last? Just weeks after the election, ABC’s George Stephanopoulos swooned "We have not seen this kind of combination of star power and brain power and political muscle this early in a cabinet in our lifetimes." Newsweek called Obama economic adviser Larry Summers “brash and brilliant” and part of “a team of Harvard and Yale types whose SAT scores have not been equaled since the Kennedy administration.”

The infusion of blue gray matter into Washington was going to calm the economic waters, create entire new “green” industries and maybe usher in a golden age for D.C.’s art-house movie theaters. Heck, Obama even tapped Hillary (“World’s Smartest Woman”) Clinton to be Secretary of State.

If there was any question which side of the ideological blogosphere a lot of the inside-the-beltway media establishment go to regularly, Politico may have just cleared that up.

In an Oct. 11 Politico story headlined "Think Progress makes its mark," which was the top story on its Web site that evening, Daniel Libit paid reverence to the left-wing Center for American Progress' Think Progress blog.

"Can a liberal blog launched in the midst of the Bush era - a blog that once obsessed over Alberto Gonzales, Donald Rumsfeld, Karl Rove and the outing of Valerie Plame - still make its mark in the age of Obama?" Libit wrote. "In the case of Think Progress, the answer so far is yes."