On Tuesday’s CBS "Early Show," host Hannah Storm interviewed Democratic Senator Joe Biden and when the subject turned to recent success in Iraq, Storm summed things up in this question to the presidential candidate:

And let's talk about this report in "The Washington Post," that says some of the generals are considering declaring victory in Iraq over Al Qaeda. Now, does it matter if they do or don't? Is this just a matter of semantics?

Storm’s astute observation of what is being fought for in Iraq is as wise as John Edwards assertion that the "War on Terror" is just a "bumper-sticker slogan." Or, it could be compared to actress Cate Blanchett’s analysis of military leaders that she shared in an interview with Harry Smith in the 8am hour about her new movie "Elizabeth: The Golden Age": "And when you think about that moment when she arrived in front of the troops, I mean, where was Bush after 9/11? And here you had a female monarch, arriving at the battle scene."

After Biden responded by saying, "I hope the administration stops this malarkey about that the war in Iraq is about Al Qaeda," instead of challenging such a statement, Storm concurred, "And Al Qaeda wasn't there before the war in Iraq. They've been a presence since then."

Bull-SCHIP: WSJ Takes Yet Another Swipe at the Center-Right Blogosphere

In the midst of a Wall Street Journal editorial today about proponents' misrepresentations relating to the State Children's Health Insurance Program (SCHIP) coverage, cost, and financing (characterized as "fiscal fraudulence"), the Journal took shots at blogs that have questioned the SCHIP eligibiliy of Graeme Frost, the 12-year-old boy the Democrats used to deliver a two-minute rebuttal to President Bush's veto of legislation that would vastly expand the program.

The Journal's criticisms of SCHIP expansion and the Democrats' overheated rhetoric after the veto are, on substance, very solid:

After President Bush vetoed Congress's major expansion of the State Children's Health Insurance Program, Nancy Pelosi declared: "President Bush used his cruel veto pen to say, 'I forbid 10 million children from getting the health benefits they deserve.'" As far as political self-parody goes, that one ought to enter the record books.

It's wrong on the facts, for one, which Speaker Pelosi knows. ..... The Schip bill was not some all-or-nothing proposition: A continuing resolution fully funds the program through mid-November, so none of the 6.6 million recipients will lose coverage.

David Herszenhorn's front-page "Political Memo" for Wednesday's New York Times was devoted to the fight over Graeme Frost, the boy pushed forward by the Democrats to deliver the response to Bush's weekly radio address on the State Children's Health Insurance Program (S-CHIP).

The Baltimore Sun ran a story that morning noting young Graeme Frost's brush with political football history, and two days earlier ran a gauzy profile on Graeme's mom and dad and their push for the Democratic SCHIP expansion here. But now that conservative bloggers have been raising questions about the portrayal by Democrats and the Baltimore Sun of the family's financial plight, the Sun is hitting back by attacking conservatives bloggers as heartless and obsessive, Michelle Malkin noted on her blog.

By Mike Bates | October 5, 2007 2:46 PM EDT
Retired steelworker Steve Skvara tugged at the heartstrings of liberals everywhere when he asked Democratic presidential candidates at an August debate sponsored by the AFL-CIO, "What's wrong with America? And what will you do to change it?" The underlying premise of his question, that something's wrong with this nation because taxpayers aren't picking up the tab for his spouse's health insurance, made him an instant celebrity in certain circles.

Again exploiting children and mothers to advance the goal of expanding federal spending and dependency, ABC's World News led Wednesday night by giving voice to the media-political establishment's astonishment that President Bush would veto a bill to provide health insurance “for children.” Anchor Charles Gibson led his newscast: “Most politicians like to kiss babies, pet dogs and support programs for children. Not often you'll see one take a stand against a proposal providing health insurance for children. But that's what President Bush did today, vetoing the so-called S-CHIP program that would have expanded health insurance for children by $35 billion.”

Reporter Martha Raddatz highlighted how “the country seems to disagree” with Bush since “72 percent of Americans support expanding the program,” which the media have promoted, “including majorities of Republicans and conservatives.” Indeed, ABC's poll (PDF) found self-identified conservatives favor the expansion by 61 to 36 percent. Raddatz, who two weeks ago used a crying mother to push increased spending, warned Wednesday that “the veto could have a profound impact.” To back her assumption, Raddatz featured an unlabeled left-wing activist from Families USA followed a mother who pleaded: “Having it taken away would be devastating. You can't do that to children. It's not right.”

CNN’s Jack Cafferty, in a "Question of the Hour" segment on Wednesday’s "The Situation Room," offered a loaded question involving President Bush’s veto of a proposed expansion of the SCHIP program. "President Bush has increased the national debt by trillions of dollars. Why would he veto a bill providing health insurance for children?"

Cafferty’s question came 10 minutes into the 5 pm Eastern hour of "The Situation Room." Before he asked that question, Cafferty detailed that President Bush’s veto of SCHIP "was cast very quietly this morning behind closed doors. No fanfare, no news coverage," and the reasons the President listed for his veto. He then added that "this is the same man who will soon go to Congress and ask for another $190 billion to continue that glorious war in Iraq." Cafferty also outlined how under President Bush’s leadership, the ceiling for the national debt has been increased for the fifth time in seven years to $9.8 trillion, and how apparently, President Bush "has borrowed more money from foreign governments and banks since taking office than this country's first 42 presidents combined."

When the Story's Got Children, Who Needs Facts? 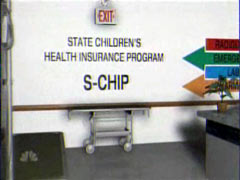 According to the media's parade of children who need government assistance for insurance, President Bush must really just hate children. After all, he vetoed a bill today that would have expanded the State Children's Health Insurance Program (SCHIP).

Leading up to the October 3 veto, the media couldn’t resist scripting it as a vote against children.

Cherie Black of the Seattle P-I took the opportunity to inform readers of a liberal cancer patient's political stunt: putting out a personals ad looking for a Canadian man to marry, for health care, of course.

But while Black breezed past Canadian angst over American Jeanne Sather's hopes of cashing in on love and free health care, the P-I reporter failed to mention a prominent Canadian pol who recently went to the United States for cancer care.

CBS, and especially ABC, on Thursday night portrayed the debate over increasing federal spending on health insurance for children as an effort to help kids only the cold-hearted could oppose, a framing aided by scenes of cute toddlers, a crying mother and little emphasis on how those well above poverty would qualify. ABC anchor Charles Gibson overlooked the proposed expansion, to those in families who have or can afford private insurance, as he cited “a bill providing health insurance to millions of kids whose parents cannot afford private coverage.”

Reporter Martha Raddatz found a poor mother to exploit, beginning her story: “Susan Dick depends on the so-called SCHIP [State Children's Health Insurance Program] program for her two sons, both of whom have asthma. The family income is too low for private insurance, too high for Medicaid.” Raddatz briefly noted Bush's fear many would move from private insurance to the government program and then, leading into a soundbite from liberal Republican California Governor Arnold Schwarzenegger, she hailed how “the expansion has bipartisan support across the country, including from many Republicans...” Capping her story, Raddatz featured a crying mother who sympathetically fretted: “If my boys don't have health insurance, it makes it very hard when you're a parent to know that they're sick and you have to get them to the doctor.” Raddatz coldly concluded: “But the President made it very clear today, Charlie, he will veto this bill in its present form.” CBS anchor Katie Couric also painted Bush as opposed to helping kids: “President Bush opened a news conference today by attacking a proposed expansion of a health care program for low-income children.”

The $50 Billion 'Ohio (Universal) Health Care Plan,' and What It Implies about Hillarycare II

This story about Ohio has nationwide application. That's because Ohio's media have been awfully quiet about the tax increases that will be necessary if the Buckeye State's version of "universal health care" comes to pass. The bill was introduced on April 25, according to this Ohio Legislative Services Commission bill analysis, and has flown under the radar ever since. I expect that national Old Media scrutiny of the Second Coming of Hillarycare will also be minimal.

My interest in the so-called "Ohio Health Care Plan" was perked when I heard an ad from the Ohio Chapter of the National Federation of Independent Businesses (NFIB) claiming that the plan would cost Ohio taxpayers $50 billion.

A separate fiscal analysis by the Legislative Services Commission is pending, so I thought that the NFIB might be engaging in a bit of reckless hyperbole.

The media spun the report by the U.S. Census Bureau yesterday to show that although poverty numbers were lower, the number of Americans without health insurance was increasing. But they didn’t even get that right.

“There's news on the economy tonight,” said NBC News anchor Brian Williams. “The percentage of Americans living in poverty dropped a bit last year to 12.3 percent from 12.6 percent of the population the year before. But there was bad news on this front as well. The number of Americans without health insurance has gone up from nearly 45 million in 2005 to 47 million Americans last year.”

The statistics Williams is referring to come from the U.S. Census Report, “Income, Poverty, and Health Insurance Coverage in the United States: 2006.” It broke down the 47 million uninsured and reported that a little over 10 million of those uninsured are not a citizen of the United States, something Williams failed to disclose.