RARE: Insurance Company Pays For Life Instead Of Death

Everything’s bigger in Texas, including hearts for families! 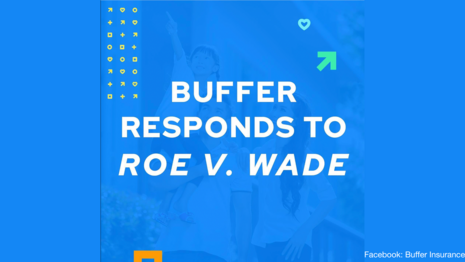 Buffer, a Texas-Based insurance company, is now offering to pay for birth, adoption and paternity leave for new parents, according to the The Blaze.

In a time when everybody and their mother are offering to pay for abortions, it’s refreshing to see a company openly support new life, not encourage people to end it.

Following the overturn of Roe v Wade last week, “many high-profile corporations promised funds for employees and their dependents to seek abortion in other states.” Amazon pledged to pay “up to $4,000 in travel expenses,” Dick’s sporting goods promised to reimburse up to “$40,000” for travel fees, and even Starbucks includes abortion travel fees in its employee insurance plan. Scones and suction for the win!

On its Facebook page, Buffer posted its response to Roe v. Wade. “Secular companies are paying the travel costs for employees to abort babies out-of-state. Today we are announcing that Buffer will pay the costs for our employees who birth babies,” the group said in its post.

Buffer promised to include paid time off for parents.

Buffer also promised to help those who wish to adopt.

Bringing children into the world and adopting children that need a home is a beautiful thing and it’s refreshing to see a company recognize that. As of late, it has become commonplace for abortion to be the solution to a pregnancy. Companies are boasting about the opportunities they offer to terminate pregnancies instead of celebrating the beautiful life that has formed.

In truth, it’s cheaper to pay for an abortion procedure than it is to pay for PTO for parents. Maternity leave can sometimes last long and employers could be lacking in staff during that time off. When traveling for abortion procedures, employers only lose staff for a few days, so to them, abortion is the most bang for their buck.

MRCTV Managing Editor and host of Reality Check, Brittany Hughes, commented on the idiocy of companies funding abortions her recent episode. “And of course Liberals are praising them for it because they’re too dense to realize that these companies ... they’re not paying for abortions because they believe in women's choice. They’re paying for abortions because its cheaper than supporting moms.”

Buffer may not be rolling in the dough but at least they care about protecting life. How do I sign up?