It’s become more popular for companies to support the death of children rather than support birth but one Texas based firm had a different response. 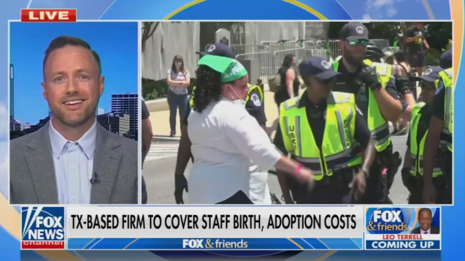 After the U.S. Supreme Court overturned Roe v. Wade on June 24, numerous large companies have voiced their opposition to the verdict. Companies are offering paid time off as well as medical benefits for employees and their dependents to travel to abort their children. Turner says his company is doing something quite different.

We saw all the mega corporations, all the large corporations, making it easy for people to have these continued abortions and so, as a small business owner, we thought it was important to take the opposite stand — make it easy for our employees to expand their families.

The Fox & Friends host, Julie Banderas, mentioned that “80% of women who have had abortions say, if they only more support, they wouldn’t choose abortion.” Turner’s company aims to give support to these women who want to have their children but need additional support. Unfortunately, Turner’s take remains an outlier when compared to other companies.

In all honesty, it is cheaper for companies to fund a one-and-done abortion visit than prenatal care, hospital visits and PTO for new parents. Abortion is the less expensive option which is why it's the main solution that these mega companies are pushing.

Turner mentioned that Buffer Insurance has received a plethora of gratitude from across the nation. He also urged interested clients to speak to their employers about using Buffer’s benefits.

If you work for an employer and you want your employer to implement similar benefits, have them reach out to us because we’ve created resources to help them implement them and just maximize their contribution towards something like this.

In a society that celebrates and encourages women to believe that they need to abort their children to be successful, Buffer Insurances’s stance is unique but necessary. Hopefully other companies follow suit.