Martin Crutsinger has been a business and economics writer at the Associated Press for over three decades. Certain people in high places apparently hold him in high regard. In early 2014, on his 30th anniversary with the wire service, he is said to have received congratulatory letters from soon-to-be Federal Reserve chair Janet Yellen, soon-to-be-former chair Ben Bernanke and Obama administration Treasury Secretary Jack Lew, which he clearly enjoyed as those in attendance munched on a very delicious-looking cake.

We can't know whether the congrats from those heavy hitters merely marked a career milestone, or if they included an element of "Thanks for toeing the line all these years." What I do know is that the dispatch Crutsinger wrote Friday morning on the government's gruesome May wholesale trade report contains errors and instances of ignorance which really do take the cake.

Crutsinger's busts are so blatant and obvious that I decided to wait until late Friday evening to see if he or anyone else at the AP would fix them. 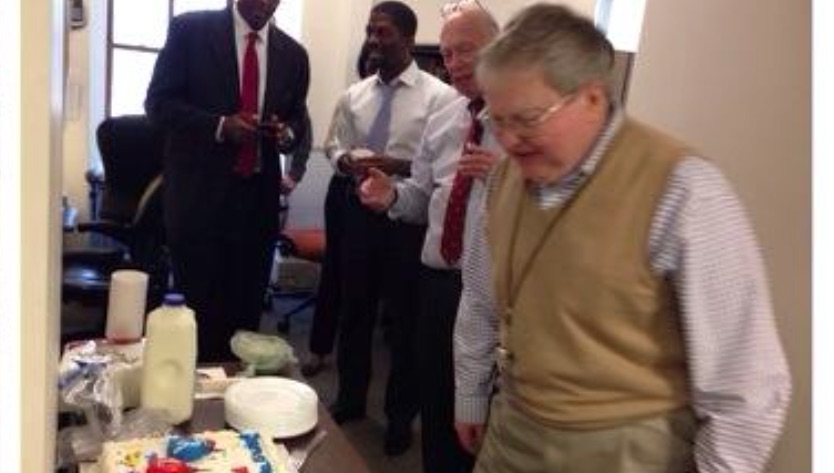 That hasn't happened. The story is the same as it appeared at 10:19 Friday morning at the AP's main national site and at its "Big Story" site.

The primary takeway in the AP reporter's narrative is supposed to be his claim that "The strong increase in inventory building in May could be evidence that businesses are growing more confident about the future." That's almost definitely rubbish. Crutsinger's errors conveniently make his "analysis" look credible.

There was an increase in seasonally adjusted inventories. But I will show, based on the first seven paragraphs of Crutsinger's missive — presented as a graphic in case the wire service finally recognizes its errors — that in one key instance, when he thought he was commenting on "inventories," he was really referring to "sales." This confusion or ignorance caused him to seriously mislead his readers.

Here are those first seven paragraphs:

The five items underlined in red represent the five chances the AP and Crutsinger had to describe the inventory increase as seasonally adjusted. While it's understandable that such a description wouldn't be in the headline, it's inexcusable that it didn't show up until the fourth paragraph (underlined in green). That's because, before seasonal adjustment (i.e., in reality), inventories declined:

The fact is that wholesalers didn't "boost their stockpiles" in May; there wasn't a "strong increase in inventory building"; and they didn't "decide to accelerate inventory stocking." Wholesalers instead reduced their inventories by less than they have in most previous years, which explains why the seasonally adjusted result turned out to be an increase. There's nothing underhanded in that conversion (we'll see a different conversion which is quite suspect a bit later), but readers should have learned that the reported increase was seasonally adjusted well before Paragraph 4.

Now we can get to the really serious busts in Crutsinger's work.

Astute readers may already be wondering why the AP reporter's $449.8 billion in his fourth paragraph doesn't agree with the inventory figures seen above. That's because ... (I can't believe I'm typing this) ... the $449.8 billion figure and the 3.8 percent decline are for sales and not inventories. Oh, and the cited percentage reduction of 3.8 percent in sales just scratches the surface. Monthly wholesale sales have been lower than the same month in 2014 all year long, and the drops have been getting progessively steeper:

The graphic shows that Crutsinger really used sales figures when he referred to "inventories." How he could possibly have confused the two items and not have caught himself before hitting the "Publish" key is beyond me. How his editors could have failed to detect his errors is incomprehensible — unless there really aren't any editors.

The fact that year-over-year seasonally adjusted sales fell by 3.8 percent is bad enough, but look at the not seasonally adjusted figures. Sales actually fell 2.5 percent from April to May; that ugly decline, especially compared to the three previous years, still "somehow" turned into a positive seasonally adjusted result. Also note that the raw sales decline from $478.6 billion in May 2014 to $446.0 billion in May 2015 is a frightening 6.8 percent (far worse that the 1.5 percent and 3.6 percent year-over-year declines seen in March and April, respectively), and that May's actual sales are lower than they were in May 2012.

Beyond that, wholesalers have not adjusted their inventory levels in reaction to the steep declines in sales just noted:

Wholesale inventories have shot up by 18 percent in the past three years. With sales currently declining and winter weather long gone as an excuse, wholesalers are clearly at a critical juncture.

As I wrote at my home blog Friday afternoon:

Wholesalers either have a crystal ball telling them that sales are going to come roaring back and that they need their current high inventory levels to meet that demand when it comes, or they need to seriously trim their inventories.

It really appears that wholesalers tried to cut inventories in May in the face of declining sales, but didn't trim them back by as much as they would have liked.

Marty Crutsinger has intead told readers that businesses could "accelerate inventory stocking," because, as seen in the blue-underlined sentence, "Economists believe sales at both the wholesale and retail levels will rebound in coming months." Even if sales do "rebound," which has clearly not been the trend, such an increase would hardly justify increasing inventory levels even further.

Here's the big mislead in all of this: Crutsinger's description of the 3.8 percent year-over-year decline as occurring in inventories instead of sales gives readers the impression that stockpiles need to be replenished to serve the expected "rebound" in sales. Far more important, readers and AP subscribers relying on his dispatch will have absolutely no idea that year-over-year wholesale sales have been in a serious and protracted decline. How convenient, given the exacly opposite evidence that inventories have risen to levels which from all appearances are not sustainable.

Finally, Crutsinger's reference to the strong reported retail sales increase in May, cited in the dark blue-underlined sentence, is quite ironic. That's because, as I noted a month ago, the seasonally adjusted increase of 1.2 percent also seems quite overstated in the context of the underlying raw results.

Many of us in the general public who read Crutsinger's dispatches or recognize his unattributed narratives in radio and TV reports read around the nation share the assessment of National Review's Kevin Williamson two years ago, namely that he is "The Worst Economics Writer" in the land. Williamson even believes that the execrable New York Times columnist Paul Krugman "is nowhere near as destructive a force in our public discourse as is Martin Crutsinger." Maybe, maybe not. But, at least in this instance, Crutsinger was either woefully ignorant or incredibly careless — and his bosses at AP cannot possibly have genuinely checked his work.

Given what I've documented here, I can't help but wonder if the AP should consider the possibility that after 31-1/2 years in the same job, Marty Crutsinger might have reached the limits of his usefulness — and while they're at it, start exercising at least some oversight over their business and economics reporters.