Lame, and Unacceptable: AP Claims 'Gun at Head' Photos of Cruz Had No Bad Intent

The Associated Press, although it has apparently removed the primary photo involved from where it was posted last night at its APimages.com web site, is showing no remorse over having published what it has now admitted are five photos of 2016 Republican presidential candidate Ted Cruz containing "guns seen on a wall in the background so that it appeared a pistol was pointed at Sen. Cruz’s head."

AP Media Relations Director Paul Colford, in a statement seen at the Politico and Mediaite which he has not mentioned at his Twitter feed and (as far as I can tell) hasn't posted at any official wire service page, wants us to know that they had no bad intentions — so would everyone please leave them alone so they can continue purveying their "unintended" filth? It's hard to have any reaction other than that to Colford's lame and completely unacceptable statement, which follows the jump.

If anything, Colford's statement appears to betray an intent to take as many photos as possible with guns in the background as it took to get the "right" shot: 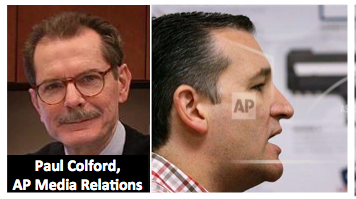 Presidential candidate Ted Cruz was shown in a series of 14 photos taken by an Associated Press photographer at a ‘Celebrate the 2nd Amendment’ event Saturday afternoon, held at a shooting range in Johnston, Iowa. Five of the photos published by AP included images of guns seen on a wall in the background so that it appeared a pistol was pointed at Sen. Cruz’s head. The images were not intended to portray Sen. Cruz in a negative light.

Am I supposed to believe that AP photographer Charlie Neibergall doesn't have sufficiently up-to-date techhology to see how his photo will look right after he takes it? On the reasonably safe assumption that he does, he would appear quite vulnerable to a charge that he kept on snapping photos with guns in the background until he got the one he wanted.

Yet we're supposed to presumptively believe Colford when he claims that "The images were not intended to portray Sen. Cruz in a negative light." Sorry, AP, you haven't earned that presumption.

Here's my short translation of Colford: "We do what we want. If you don't like it, too bad, so sad. You can't touch us."

It would not be at all out of bounds for candidates to refuse to allow AP equivalent access to their events until there is some sign of public regret. If I were a candidate or a candidate's spokesperson, my first response to any question from an AP reporter would be, "I'll be more than happy to answer your question when we see a public apology for your employer's Ted Cruz gun-to-the-head photos, and a promise that there will be no recurrence."

Also for historical perspective, in the wake of the massacre of six people and wounding of Congresswoman Gabrielle Giffords and many others in January 2011, the AP noted — a full two months after the 2010 elections had ended that "Sarah Palin (was) criticized by some for marking Giffords' district with the crosshairs of a gun sight during last fall's campaign."

The wire service apparently thought that the substantively spurious complaints about Palin, which had to do with a figurative tactic employed for years by politicians across the ideological spectrum (with no photos involved), were sufficiently meritorious to mention.

Yet publishing five photos showing gun graphics pointed at a presidential candidate over 16 months before Election Day is okay and not the cause for even the slightest bit of regret, because there was supposedly no bad intent behind them.

Even if one gives photgrapher Charlie Neibergall a huge benefit of the doubt that there was no bad intent on his part, we should at least be seeing an apology for inadvertent error and horrid judgment from Colford. We're not even seeing that. This pretty much demonstrates that the AP as an institution has now crossed the line and entered the land of bad intent, even if it wasn't there before.