Monday night, a Cincinnati-area same-sex "marriage" activist posted on Facebook and tweeted that he had been abducted and was in the trunk of his car. A short time later, police found 20 year-old Adam Hoover and determined that he had (very clumsily) faked his abduction, and would be charged with the crime of "making false claims." In the meantime, news of Hoover's abduction and then its false nature made it to several national news outlets, including the Washington Times, Huffington Post and Buzzfeed.

In its two reports on the story Tuesday evening and Wednesday morning, the Cincinnati Enquirer posted the following introductory note: 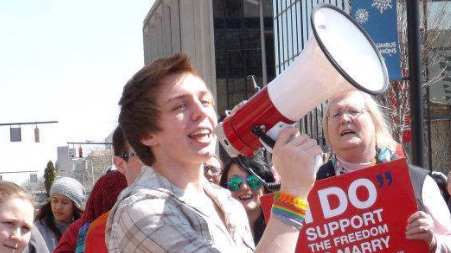 We decided to publish this story because it dealt with a prominent local figure who posted claims in a very public setting. We understand and respect Mr. Hoover's privacy, but we also believe it's important to cover public figures and events that potentially have an impact on public safety resources.

By indicating that a "decision to publish" was made, the Enquirer has undeniably and outrageously admitted that it considered not reporting the results of a story which had already gone viral. Why?

It would seem that a factor contributing to that reluctance is that Hoover, according to local TV station WLWT, "is a founder of Marriage Equality Ohio, which he helped create in 2010." (The Enquirer's Wednesday report says that "Hoover started working for Marriage Equality Ohio in 2011 and has done most of the promotion work for the organization since then.")

Thus, there appear to have been discussions in the Enquirer newsroom about how reporting on Hoover might hurt his cause. It's also reasonable to believe that the paper was pressured by outsiders and/or parent company Gannett to either not cover Hoover's hoax or to downplay it as much as possible. The introductory note at its two stories comes off as a de facto "Sorry, we wish we could ignore this, but we can't, so please-please-please don't hate us for it" apology to those who would have wanted the story suppressed.

If there was pressure to downplay the story, those who exerted it appear to have gotten their way, as headlines relating to Hoover disappeared quite quickly from the Enquirer's home page.

It's hard to imagine that the Enquirer would have been so deferential if the person faking his abduction had been an advocate on the other side of the same-sex "marriage" issue.

Add this to the long list of reasons why, as I noted in a column posted at another site earlier this week, "I won’t subscribe to the paper even if they bring a copy to my door on a silver platter every day."

Sadly, it's hard to believe that the Enquirer is the only local U.S. paper which would have qualms about publishing news which might harm a politically correct cause.

The handling of this incident also begs the question of how much other less visible bad news which might cast favored persons or causes in a bad light is being suppressed around the country.