In his story on Brian Williams at 10:55 p.m. ET Tuesday, Gabriel Sherman at New York Magazine reported that the now-suspended anchor and his agent "were presented with a dossier of Williams' apparent lies," and that "Williams himself was only slowly grasping the depths of the mess he'd created."

That begs the obvious question of whether the public will ever get to know what's in that "dossier," and what impact its contents may have had on the substance of NBC's news reports during the past dozen (if not more) years. Excerpts from Sherman's report follow the jump (links are in original; bolds are mine): 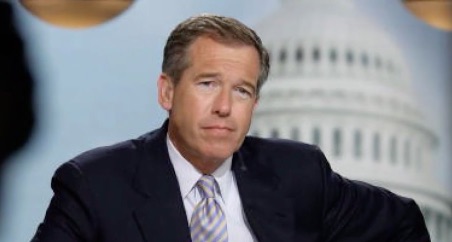 Forty seven minutes after the Nightly News – without Brian Williams – ended its broadcast tonight, NBC News president Deborah Turness issued the verdict on the embattled anchor's fate: Williams is being suspended for six months without pay. The announcement capped a chaotic week for Williams. Earlier this morning, Williams and his agent met with NBC Universal CEO Steve Burke, and were presented with a dossier of Williams' apparent lies, according to sources. At 30 Rock, Comcast executives huddled in emergency meetings throughout the day. Williams himself was only slowly grasping the depths of the mess he'd created. “He's in denial,” a source said.

One can only imagine that Williams was wishing his anchor escape plan had worked out and that he was the host of The Tonight Show right now. According to two NBC insiders, when the network decided to move on from Jay Leno a few years ago, Williams lobbied NBC executives to give him the host’s chair. “Brian wants to be a late-night comedian,” one former colleague explained. “He traded on being Nightly News anchorman-war-reporter to ingratiate himself with Jimmy, Lorne Michaels, and Jon Stewart.”

Now, of course, he’s become the subject of jokes rather than the one telling them. The meeting with Burke was part of NBC's effort to resolve the metastasizing crisis. According to sources, the network was considering a range of options that involved cutting him loose, a lengthy suspension, or a detailed on-air mea culpa. One high-placed source told me this afternoon, correctly, that Williams was likely to face a “severe punishment” but will hang on. Indeed, Burke called Williams’s fictions “inexcusable” and the punishment “severe.” Williams’s agent, Bob Barnett, did not return a call or email seeking comment.

While the speed of Williams's crash has stunned NBC staffers — “the cannibalism that’s going on here is so ferocious,” one told me — many people inside NBC News knew about Williams’s tendency to exaggerate the now-infamous helicopter ride in Iraq.

... As word of Williams’s habit of embellishing spread through the network over the last decade, powerful voices tried to stop him. According to sources, former NBC News president Steve Capus and Tom Brokaw implored Williams to stick to the facts.

... This likely won’t be the end of Williams’s troubles. The network announced today that Richard Esposito, the senior producer conducting the fact-checking investigation of Williams's statements, will continue his inquiry. The fact that NBC lawyers are said to be reviewing the list of Williams’s fictions is an ominous sign. Another source told me today that NBC has widened their probe to include Williams’s expense accounts. In the meantime, NBC executives will be pouring over Lester Holt’s ratings data to gauge his strength as a possible full-time replacement.

... NBC News staffers are said to be angry at the decision, which many feel is a slap on the wrist. Some wonder how he can ever return. "How does he ever sit down with Rand Paul or Chris Christie and say, ‘You said this two years ago, and you said this last week.'" one longtime staffer told me. "How does he do that?”

How telling it is that the speculative question from insiders at the end of the excerpt refers to potential Republican presidential candidates and not the current occupant of the Oval Office, whose list of documented lies arguably is closing in on triple digits. The linked list is far from all-inclusive, as it doesn't include David Axelrod's admission noted earlier today that then-candidate Barack Obama lied during the 2008 presidential campaign when he claimed to oppose same-sex "marriage."

It doesn't seem at all unreasonable to insist that having all of the information currently contained and ultimately to be collected in that dossier see the light of day be made a precondition for a public evaluation of whether Williams should ever return to any kind of work as a journalist, let alone returning to the anchor's perch at NBC's Nightly News.

If NBC won't give up the information, there's no reason to expect the public to be in a forgiving mood — towards Williams or the network.