At 4:45 p.m. Wednesday afternoon, the New York Times, teasing an item entitled "‘Dangerous Moment’ for Europe, as Fear and Resentment Grow," tweeted that "The Paris terror attack seems certain to accelerate the growth of anti-Islamic sentiment in Europe."

Consistent with a long-established nasty habit, the opening sentence of the report by Steven Erlanger and Katrin Bennhold has since been revised without notice, and is tagged as appearing on Thursday's front page. The headline is the same, but the first sentence now reads: "The sophisticated, military-style strike Wednesday on a French newspaper known for satirizing Islam staggered a continent already seething with anti-immigrant sentiments in some quarters, feeding far-right nationalist parties like France’s National Front." Yeah, those are Europe's biggest problems, not Islamic terrorism.

Here's more from the pair's writeup (bolds and numbered tags are mine): 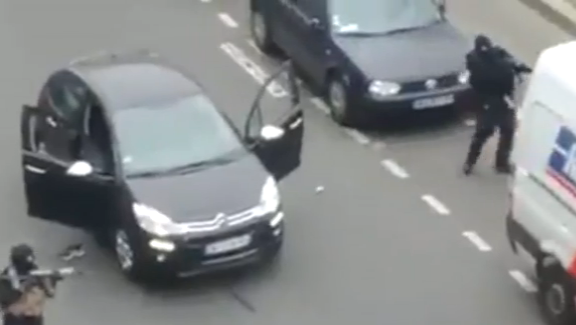 “This is a dangerous moment for European societies,” said Peter Neumann, director of the International Center for the Study of Radicalization at King’s College London. “With increasing radicalization among supporters of jihadist organizations and the white working class increasingly feeling disenfranchised and uncoupled from elites, things are coming to a head.”

... Anti-immigrant attitudes have been on the rise in recent years in Europe, propelled in part by a moribund economy and high unemployment, as well as increasing immigration and more porous borders. [1] The growing resentments have lifted the fortunes of established parties like the U.K. Independence Party in Britain and the National Front, as well as lesser-known groups like Patriotic Europeans Against Islamization of the West, which assembled 18,000 marchers in Dresden, Germany, on Monday.

In Sweden, where there have been three recent attacks on mosques, [2] the anti-immigrant, anti-Islamist Sweden Democrats Party has been getting about 15 percent support in recent public opinion polls.

Paris was traumatized by the attack, with widespread fears of another. “We feel less and less safe,” said Didier Cantat, 34, standing outside the police barriers at the scene. “If it happened today, it will happen again, maybe even worse.”

Mr. Cantat spoke for many when he said the attacks could fuel greater anti-immigrant sentiment. “We are told Islam is for God, for peace,” he said. “But when you see this other Islam, with the jihadists, I don’t see peace, I see hatred. So people can’t tell which is the real Islam." [3]

The newspaper, Charlie Hebdo, in its raucous, vulgar and sometimes commercially driven effort to offend every Islamic piety, including the figure of the Prophet Muhammad, became a symbol of an aggressive French secularism [4] that saw its truest enemy in the rise of conservative Islam in France, which is estimated to have the largest Muslim population in Europe.

... The attack left some Muslims fearing a backlash. “Some people when they think terrorism, think Muslims,” said Arnaud N’Goma, 26, as he took a cigarette break outside the bank where he works.

[1] — All of those factors are mildly relevant, but far more relevant is the fact that there have been many serious Islamic terrorist attacks on European and British soil since the turn of the century. The Associated Press lists six others here with a combined dead body count of 251.

[2] — This attempt at equivalence is pathetic, given over 260 deaths (counting Wednesday's Charlie Hebdo massacre). Though the Swedish "attacks" on mosques are reprehensible, it's worth asking how many Muslims were killed in those three incidents. I'm reasonably sure that the answer is zero, because if it was more than zero, the Times reporters would have told us.

[3] — Maybe, just maybe the problem is that there are two "real Islams," one all-jihad all the time and the other moderate, and that the jihadists are significant enough in number to be of deadly worldwide concern. TheReligionOfPeace.com has identified 24,795 deadly attacks carried out by Islamic terrorists since the September 11, 2001 strikes on New York City and Washington which killed almost 3,000.

[4] — Erlanger and Bennhold irresponsibly left out the critical fact that Charlie Hebdo was an equal opportunity offender which went after Catholics, Jews, politicians and others. From reading this sentence, one would think that it was entirely obsessed with ridiculing Islam. Additionally, heaven forbid, it tried to make money and keep the doors open.

The blood at Charlie Hebdo's offices had barely dried, and the New York Times was already fretting more about criminal and political/electoral backlashes — the former which has rarely happened before, and the latter which is arguably long overdue — than it was about whether the scourge of radical Islam is leading to a France, and Europe, paralyzed in fear. That's true dhimmitude in action.