Chris Megerian at the Los Angeles Times, in a report first published online on Tuesday, had a difficult time trying to downplay the fact that Democrat and leftist mega-donors outspent their Republican and conservative counterparts by an overwhelming margin during the past election cycle.

But Megerian made the best of it, giving readers the impression that David Koch, of the supposedly evil Koch brothers, was the fourth-largest such donor. Times editors did their part to keep the news as quiet as possible by publishing the obviously national story in the California secion of its Wednesday print edition.

Megerian pegged off a report by Kenneth P. Vogel at the Politico ("Big Money Breaks Out") — a report which has its own problem with numbers.

But first, excerpts from the LA Times piece (HT to frequent NB commenter Gary Hall; bolds are mine): 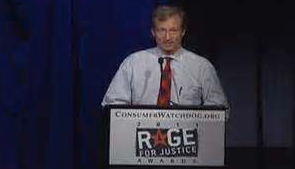 During the 2014 midterm elections, no one spent political cash like Tom Steyer, the Democratic hedge fund billionaire from San Francisco who has tried to make climate change a paramount issue in American politics.

The numbers, compiled from documents filed with the federal government, were detailed by Politico this week.

... They highlight the ascendancy of Steyer, a wonky environmental activist who can often be found wearing the same plaid tie. By comparison, casino mogul Sheldon Adelson and business executive David Koch, two Republican mega-donors, gave $13.2 million and $6.2 million. The analysis does not include money donated to nonprofits that aren’t required to reveal their contributors.

Much of Steyer’s money was spent through Nextgen Climate Action Committee, his political organization. Despite his deep pockets, however, his ability to push Democrats to victory in the midterms was limited.

Megerian "somehow" skipped, and elsewhere failed to mention, that six other mega-donors spent less than Adelson but more than Koch, as the following top ten list found at Vogel's Politico report shows:

It's hard work maintaining the left's "Koch brothers are the root of all evil" fantasy — hypocritically supported financially to a great degree, as Ciandella also noted in December, by Tom Steyer himself.

As to Bloomberg, a separate post-election Politico item estimated that the former New York City mayor spent $40 million in all. One of Bloomberg's goals is stricter gun-control laws. November's elections results did not help his cause.

Here's the LAT's wrap-up of its writeup:

... (Steyer) detailed his thoughts on how to keep the environment at the forefront of voters’ minds in the future.

“Human beings care about human beings, and they care about local issues, not global issues,” he said. “If you wanted to discuss energy and climate with someone, you better be talking about how it affects human beings where they live and who they love.”

Here's a clue, Tom: You can't do that, because "climate change" i.e. "global warming," is not a legitmate issue — with one exception: the importance of thwarting global warming alarmists' attempts at the Paris world-government conference next year, as Christopher Monckton has warned, aimed at "ending the freedom and democracy of the West and putting absolute economic and political power in the hands of the grim secretariat of the UN climate convention."

The Politico item's folly is how its content contradicts its headline.

The Center for Responsive Politics estimates that only 0.28 percent of American adults donate to campaigns.

So which one is it, Ken Vogel?