How Liberal-Pleasing Is Colbert? Democrats Build Fundraising List Out of Thank-You Petition

Just how liberal is fake conservative Stephen Colbert? Politico’s Hadas Gold reports the Democrats are raising money off his retirement from Comedy Central: 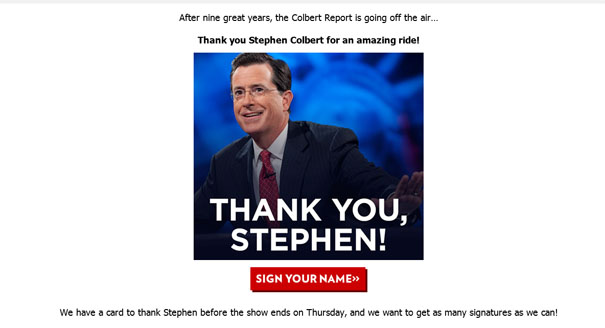 The Democratic Congressional Campaign Committee is taking advantage of "The Colbert Report's" final few days, with an email blast asking people to sign a 'Thank you' card for host Stephen Colbert.

"After nine great years, the Colbert Report is going off the air," the email reads. "Thank you Stephen Colbert for an amazing ride!"

The link leads to a DCCC page for people to add their emails, names, and zip codes to the card. Thus far more than 20,000 people have signed the card, per DCCC's count.

Isn’t it instructive that the nation’s newspapers are saying “Thank you for an amazing ride” exactly like the Democrat? We mentioned The New York Times. The front of USA Today’s Life section on Thursday carried the large bold headline “Stephen Colbert, you served us well.” Underneath that was a montage of photos with the headline “THANKS FOR THE MEMORIES!”

They said Colbert’s run was “marked by the marvelous (President Obama took over his show last week).” Only a Democrat would approve that concept.

Underneath were gushy quotes from former Daily Show castmate Steve Carell. Colbert’s character is “not only funny and topical and has become part of the zeitgeist, but it’s important. To me, his character is a personification of the freedoms that we have as Americans. To be able to poke fun at your own country and to satirize and to be a watchdog, in a sense – talk about brave.”

Navy SEALS have nothing on this guy when it comes to bravery.

Peter Jackson, the “Lord of the Rings” director, spoke for many media liberals who assume everyone agrees with Colbert’s conservative-bashing. “By pretending to be a buffoon, he’s actually the voice of reason. It’s a clever idea that allows him to satirize in a very complex manner. You don’t ever feel like you’re getting someone commenting and preaching. You agree with him.”

Inside, there’s more in a Donna Freydkin article. Movie director Judd Apatow cooed, “I think he’s the most confident, intelligent, relaxed performer we’ve ever seen...There are all sorts of thoughtful important ideas being expressed about our political system and what a mess Congress has become. What he does every night is stunning."

Perhaps the most vomitous praise emanated from PBS star Ken Burns, whose programs are stuffed with liberal thoughts and whose work is imbalanced in the most pompous way. "Stephen punctures the certainty of people who never allow a doubt or opposing view to cross their brain."

Do you know who never allows an opposing view to cross their brain? People who think Colbert is a mind-blowing genius. All the press coverage is excluding anyone who thinks he’s been an annoying and unfunny liberal full of insults. That would puncture a certainty the media keeps relentlessly promoting. “Everyone” loves Colbert and will miss this “faux-conservative windbag.”