Time Mag Touts 'the Clinton Way': They 'Play By Their Own Rules' 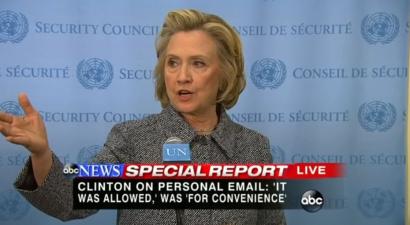 Writing for the March 23 Time magazine, writer David Von Drehle delivered a 2400 word essay on just how the Clintons seem to perpetually survive scandal after scandal. He began by declaring, "The Clintons play by their own set of rules" and went on to describe why Hillary Clinton might beat the e-mail controversy.

Von Drehle opined, "But if awkward press conferences could bring down a Clinton, the political supercouple might never have left Little Rock." He added:

As a rule, these would be dire, perhaps fatal, markers of a campaign crashing on takeoff. But in this case the politician was Hillary Clinton, whose carefully laid plans to unveil her latest presidential bid hit turbulence on March 10 as she fumbled her way through an awkward press conference in a corridor at the U.N. At issue: Clinton’s decision to ignore White House guidance as Secretary of State and instead conduct government business through a private email account hosted on her family’s personal server.

Von Drehle highlighted some of the Clintons's past problems, but hopefully wondered:

"What doesn’t kill Team Clinton only makes it stronger. Will that be the lesson again? Hillary Clinton has a vast lead over any potential challenger for the Democratic nomination, and 86% of Democrats are ready to support her, according to a recent NBC/Wall Street Journal poll. Though her poor handling of the email issue has left party insiders unsure whether she learned anything from her slow-footed and wooden 2008 campaign, insiders don’t control elections. Voters do.

Likewise, it’s news to no one at all that winning public office costs far more money than the job will ever pay in salary. Because the Clintons did not have wealth of their own to fund their ambitions, they had to become adept at coaxing it from others. Indeed, they may be the most adept in American history, having coaxed billions of dollars from a multitude of donors–which requires a degree of flexibility in one’s choice of benefactors. As the saying goes: Beggars can’t be choosers.