Friday afternoon, Republican Senator Rand Paul suffered a minor injury when he was attacked as he was mowing the lawn at his home.

Most print media coverage thus far have failed to note that Paul was present at the baseball practice where Congressman Steve Scalise of Louisiana and three others were shot in June, or that the FBI reportedly believes that yesterday's attack on Paul was politically motivated.

The Kentucky senator was among the twenty-plus members of the Republican congressional softball team and others who accompanied them at a practice the day before the annual Congressional Baseball Game for Charity. At that practice, James Hodgkinson, a Bernie Sanders supporter who had cased the field for weeks, opened fire on all who were present. Scalise was critically injured, and did not return to Congress until September 28. Three others were injured by gunfire. Hodgkinson was shot and killed at the scene by Capitol Police.

Paul told reporters that the Capitol Police prevented a massacre, and that several bullets came close to striking him (bolds are mine throughout this post): 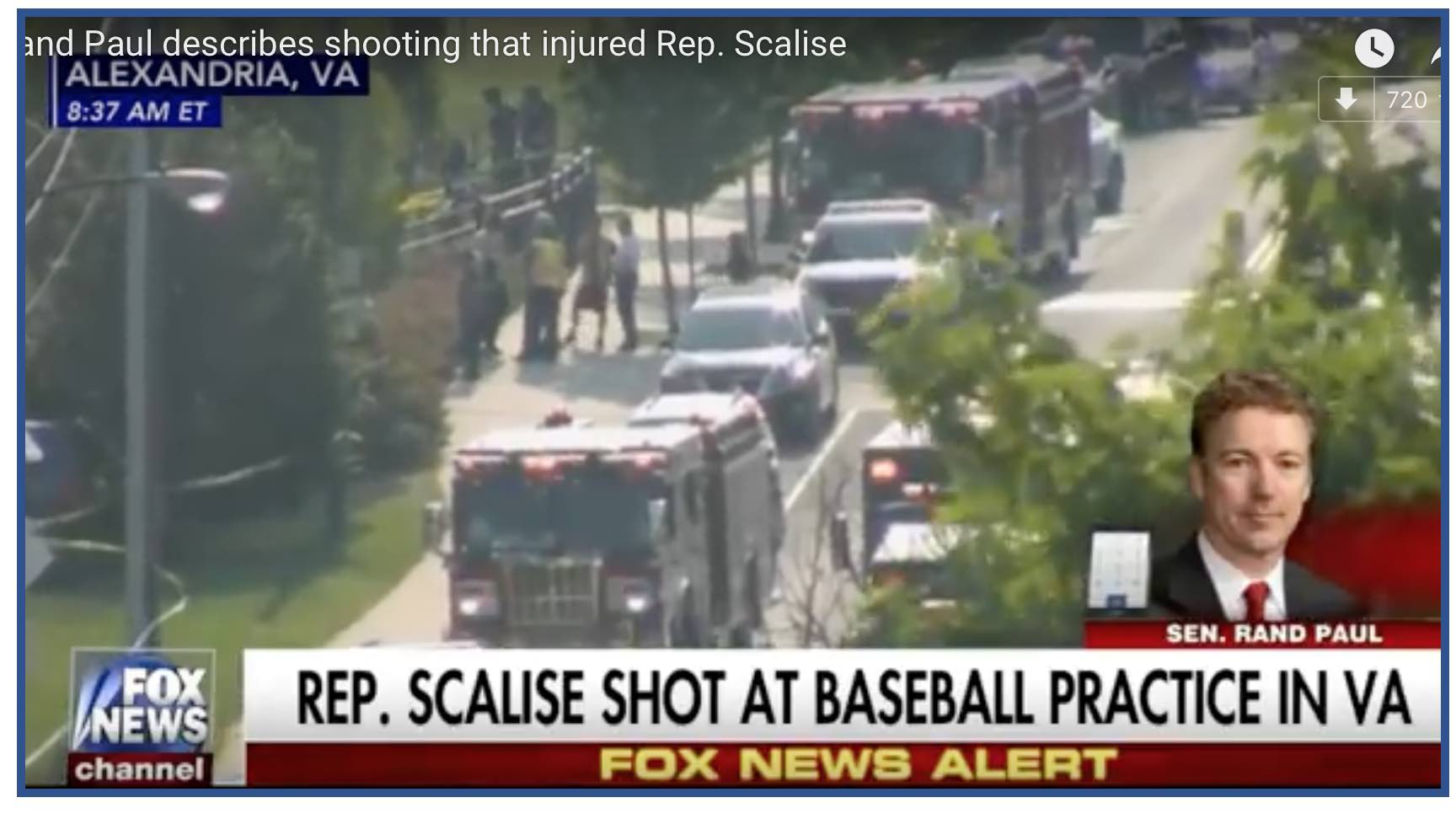 ... “I’m on the outside of the fence, and he and I are hiding behind the tree but the gunshots are landing in the dirt in the outfield and around us.”

Paul added, “Everybody probably would have died except for the fact that the Capitol Hill police were there and the only reason they were there was because we had a member of (House) leadership on our team. If Scalise wouldn’t have been on the team — unfortunately he was hit and I hope he does well — but also by him being there probably saved everybody else’s life because if you don’t have a leadership person there, there would have been no security there.”

An early October Washington Post dispatch carried at the Chicago Tribune's website covered the contents of a report by Alexandria, Virginia's Commonwealth's Attorney. That report noted that "Hodgkinson fired 62 rounds from the assault-style rifle - 33 near third base, where he had started his attack, and another 29 near home plate."

Reports at the Associated Press and the New York Times have not mentioned that Paul was nearly assassinated in June. Ed O'Keefe at the Washington Post mentioned the attack on Scalise, but failed to specifically mention Paul's presence at the scene, or even that the group baseball practice where Hodgkinson "showed up" consisted of Republicans.

Sen. Rand Paul (R-Ky.) is recovering after being assaulted at his Kentucky home Friday, joining a growing list of lawmakers who have been injured or threatened with violence this year.

...  The threats turned to violence this summer when House Majority Whip Steve Scalise (R-La.) was shot and nearly killed by a gunman who showed up at a congressional baseball practice in Alexandria, Va.

More recently, Rep. Frederica S. Wilson (D-Fla.) skipped several days of votes after threats were made against her after she sparred with Trump over the treatment of the widow of a soldier killed in Niger.

No one is saying that threats shouldn't be taken seriously, but by including Scalise and Paul in the same passage with Wilson, Green and others in the final two bolded sentences above, O'Keefe appears to want to readers to see physically harmful attacks and threats as equally serious.

They're not. Is it a coincidence that the recent physical attacks O'Keefe cited have all been against Republicans?

One outlet which did note the previous attempt on Paul's life is UPI.com, which filed the following report. The UPI dispatch also noted that a Kentucky TV station has reported the FBI's belief that the attack was politically motivated (link to that station's report added by me; HT Austin Bay at Instapundit):

... A neighbor, Rene Boucher, 59, is being held on $5,000 bond in the Warren County Detention Center on one count of fourth-degree assault Friday, according to a news release from Kentucky State Police.

WNKY-TV reported that Boucher is the senator's neighbor and the FBI believes that the attack was politically motivated against the Republican. Boucher, a retired physician, had registered as a Democrat, according to voter registration records from March.

Most other outlets including the AP, whose report is silent on the matter, and the New York Times, which talked to a state trooper who "declined to comment on a motive for the attack," are not acknowledging Boucher's reported motivation.