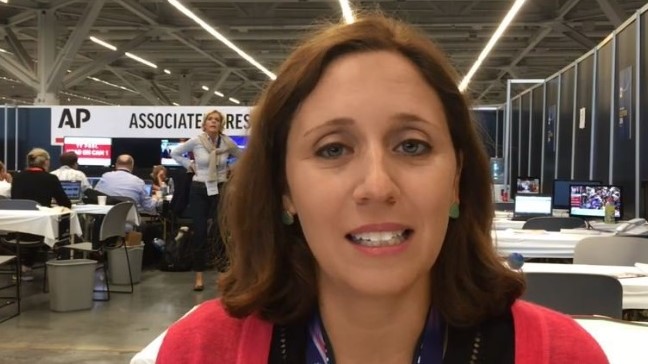 The Associated Press and reporter Julie Pace are among the last institutions and people on earth, respectively, with any credibility to harangue the public about the dangers of "a man willing to challenge - in dramatic fashion - the institutions created to hold the president accountable." But there they were on Wednesday morning, in the wake of President Donald Trump's decision to fire FBI Director James Comey, doing just that.

Pace had a serious case of the vapors over Trump's move, and furiously twisted the truth to justify her hyperventilation.

One of the leftist press's favorite tactics to support their bogus claims is to go to a supposedly objective source who is really anything but that for support. Pace didn't disappoint on that front (bolds are mine throughout this post):

... this (firing of Comey) is unprecedented," said Michael Beschloss, a presidential historian. "He's showed signs of not having a great deal of respect for the system by which this investigation has been operating."

In November 2008, at the peak of Barack Obamamania, as recounted here:

... (Beschloss) told (then-MSNBC morning host Don) Imus that Obama has the highest IQ--is the smartest man--ever to be President of the United States.

... There is no evidence that Obama is in a class with (previous presidents, particularly the Founding Fathers), or many others, but it still gets better.

Right. Beschloss had no idea.

Four years later, it was obvious to anyone with any semblance of objectivity, regardless of one's political views, that "Mr. Obama's 'superior intellect' ... (was) a myth created by journalists to mask what may be the thinnest resume of anyone ever elected president."

In other words, the AP's Julie Pace presented as a subject matter expert a guy posing as a historian who really functions as a fact-free leftist shill.

By Paragraph 7, Pace was already contradicting Beschloss's claim that Comey's firing was "unprecedented" in one of two key respects:

No matter which president originally appoints them - Comey was tapped by Barack Obama in 2013 - almost all FBI directors are allowed to serve out their full 10-year terms under successor commanders in chief. Bill Clinton is the only other president to fire an FBI chief, amid questions about the director's use of FBI aircraft for personal purposes.

So, in AP-land, if the president is a Democrat, he can exercise his presidential discretion to fire an FBI director over the obviously relevant but relatively trivial matter of expenditures which should have been personally reimbursed. But a Republican Party president can't fire an FBI director even if, in his judgment and based on the advice of his Deputy Attorney General and the Attorney General, the current director is "not able to effectively lead the Bureau." Uh-huh.

The other false element of "historian" Beschloss's claim that Trump's move is "unprecedented" is the above reference to "this investigation." Pace set up that contention in an early passage:

His surprise announcement Tuesday flouts decades of presidential deference to the nation’s top law enforcement agency and its independence. It earns Trump the dubious distinction of being the first president since Richard Nixon to fire the official overseeing an investigation involving the commander in chief.

"The investigation" is, of course, is the six month-old, evidence-lacking obsession over "Russia's election interference."

Note Pace's reference (HT John Hinderaker at Powerline) to the investigation "involving the commander in chief." That cryptic word was used, as she finally acknowledged in Paragraph 13, because Trump himself is not a target:

The president has repeatedly dismissed Comey's Russia investigation - as well as the congressional inquiries - as a "hoax." He's also insisted that he is not personally under investigation - asserting Tuesday that Comey told him three times that he was not a target - though the FBI has stated unequivocally that the president's campaign and his associates are facing scrutiny.

Trump is not the only one asserting that he's not personally under investigation. Per Iowa Senator Chuck Grassley, commenting on Comey's testimony the previous week before the Judiciary Committee:

On Tuesday, the president's letter said that Director Comey told him he was not under investigation. (Democratic) Senator (Dianne) Feinstein and I heard nothing that contradicted the president's statement.

Even some liberals, including NYU Law Professor Richard Epstein in a column at Vox.com, of all places, recognize that the Comey hysteria has no basis (link added by me):

Attention, liberals: Comey deserved to be fired, and the Constitution is just fine
The hyperventilation in Washington is unjustified.

... There are of course many reasons why one might oppose Trump’s decision to fire Comey, but none of them remotely deserve the hyperbolic responses that Comey’s termination has elicited. There are two sides to every story, and in this case the other side has, at least for the moment, the better of the argument.

Rosenstein’s memo is sound. If anything, it understates the case.

Comparisons to the (Richard Nixon) Saturday Night Massacre are overblown.

If Congress thinks the FBI is not up to the job, it can conduct its own investigation.

As to the contention about the AP and Pace in my opening sentence, the wire service, and particularly Pace, essentially bragged about how they were able, despite their knowledge that they were occurring, to keep negotiations between the Obama administration and Iran secret for eight months in 2013. It turns out that the administration asked AP and another news organization which had learned of the negotiations to keep quiet, and they complied.

On Thursday the Worldwide Threat Assessment delivered to the U.S. Senate stated that "Iran is pursuing capabilities to meet its nuclear energy and technology goals and to give it the capability to build missile-deliverable nuclear weapons." Thanks partially to the AP's acquiescence, Barack Obama, defying "the institutions created to hold the president accountable" by negotiating a "deal" rather than an official treaty requiring Senate confirmation, courted and enabled this growing danger.

Now the AP, and particularly Pace, presume to conduct a lecture on presidential accountability. What a sick joke.