The Associated Press had a variety of howlers from Democrats and leftists it could have included in its May 8 (updated on May 9) "fact check" roundup based on events of the past week. As those who have watched the wire service's conduct since the 2016 election campaign could have predicted, it included none, and instead solely went after the Trump administration and GOP politicians on nine different claims.

As I noted in a mid-April NewsBusters post, the "fact check" enterprises in the establishment press disproportionately hound Republican and conservative politicians and officials, and go after Democrats and leftists just often enough to maintain a bogus veneer of respectability.

Here just a few of many bogus leftist contentions during the past week which the AP did not include, all of which certainly deserved mention in any top-nine list of recent questionable assertions:

The AP's Calvin Woodward and Jim Drinkard accumulated nine GOP and Trump administration claims , with the help of six other AP reporters. This post will only look at the first claim, which relates to the economy, and was clearly positioned as the AP's highest-impact item.

Though its conclusion was correct, the AP botched its analysis of Sanders' statement, and ruined their presentation with a deceptive headline:

AP FACT CHECK: No, manufacturing and coal are not rebounding

... when the latest jobs report came out, the White House eagerly trumpeted the robust results. But it was out of tune.

... SARAH HUCKABEE SANDERS, deputy White House spokeswoman, in a briefing Friday: "We especially saw expansion in the sectors of the economy the president has had a particular focus on: construction, manufacturing and mining." Later in the briefing: "Primarily the places where we saw the most growth in this jobs report were in manufacturing, coal miners, other places."

THE FACTS: Manufacturing, coal mining and construction together accounted for less than 6 percent of the job growth. Of the 211,000 jobs added, 173,000 were in services while manufacturing jobs only grew by 6,000 and construction jobs by 5,000. Coal mining? By 200 jobs.

The AP's fact check on the April jobs numbers is disingenuous. Moreover, the circumstances in the economy's goods-producing sectors in recent months absolutely do not justify the dismissive headline seen above.

The AP used a wrong metric. Sanders' quoted reference to "coal miners, other places" was an awkward but obvious attempt to describe all mining. In concentrating only on coal, the AP's economics writers, whom I believe know better, chose to ignore Sanders' clear intent. 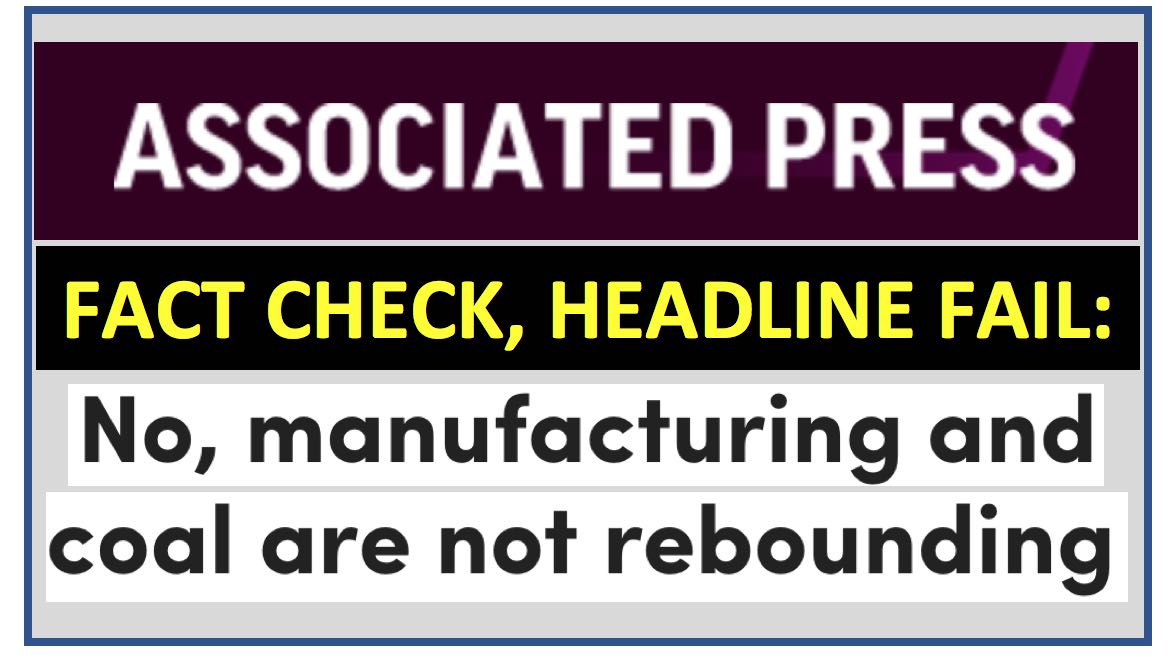 However, the results of the past six months going back to November contradict the AP's misleading headline claiming that there has been no "rebounding" in the goods-producing sectors. Based on the full scope of Sanders' comments, goods-producing should have been the focus of the analysis. The AP limited the subject of its headline and analysis to manufacturing and coal so it could create falsely sensational headline and a harsher fact check. It should be obvious that it had no justification to exclude all of mining except coal only because Sanders didn't say "construction" and "mining" twice.

Thus, after losing 3,000 jobs during the first ten months of 2016, the goods-producing sectors have since collectively contributed disproportionately to employment gains, and have turned in six consecutive positive months. Why? Because, contrary to what the Associated Press falsely claimed in its headline, these sectors have been rebounding.