As Venezuela Implodes, NBC Avoids Naming the Cause: Socialism

On Thursday, an Investor's Business Daily editorial cited a long list of news outlets which have recently covered the calamitous events in Venezuela, but which, in IBD's words, "continue to obfuscate, if not totally ignore" the fact that the country's implosion can be laid at the feet of one simple cause: "Socialism."

Before criticizing NBC, I must note that the Associated Press, whose acknowledgment of what Hugo Chavez's and then Nicolas Maduro's "Bolivarian socialist" regime was doing to the country was grudging at best for many years, has been consistently tagging that regime as "socialist" for at least the past several months — to the point where using the label appears to be a required checkbox item. On the one hand, it's about time. On the other hand, I never expected to see it.

Hannah Dreier's Saturday evening AP dispatch, with two socialism mentions in the first six paragraphs, including the opener, exemplifies this trend (bolds are mine throughout this post):

Women banged on pans and some stripped off their white shirts Saturday as they protested Venezuela's socialist government in an event the opposition billed as a "women's march against repression." As they marched, local media carried a video showing people toppling a statue of the late President Hugo Chavez the day before in the western state of Zulia.

Thousands of women took over streets in major cities all around the South American country. Wearing the white shirts of the opponents of country's increasingly embattled government, the women sang the national anthem and chanted, "Who are we? Venezuela! What do we want? Freedom!"

... Local news media carried a video circulating on Twitter of the Chavez statue being pulled down. The media reported that students destroyed the statue as they vented their anger with the food shortages, inflation and spiraling crime that have come to define life here.

Several young men could be seen bashing the statue that depicted the socialist hero standing in a saluting pose, as onlookers hurled insults as the late president.

Four other AP reports in recent days by Dreier and two other AP scribes (here, here, here, and here) applied the "socialist" tag to Maduro's government within their first three paragraphs.

The fact that the dominant U.S. source for breaking news has been properly tagging the Venezuelan government makes it all the more obvious that other media outlets are deliberately avoiding it.

NBC News's 1,600-word report by Peter Cahill and Laura Saravia Saturday morning was supposed to be an explainer ("Venezuela Protests and Economic Crisis: What Is Going On?"). Unfortunately, it mostly reads like a dispatch from two people who haven't followed the country's news at all since the turn of the century who are desperately, and ineffectively, trying to play catch-up.

Despite their claim that their report "breaks down what led to the turmoil, what could come next, and why it matters to America," readers only see a recitation of Venezuela's recent woes, and barely get any legitimate clue as to their origin. Here are the pair's first three paragraphs, followed by a later one:

Despite having the world's largest oil reserves, Venezuela is suffering from a deep recession and hyper-inflation. Prices rose by 800 percent in 2016, with the International Monetary Fund predicting inflation could hit 2,200 percent by the end of 2017. Meanwhile, the economy shrunk by 18.6 last year, according to Reuters. 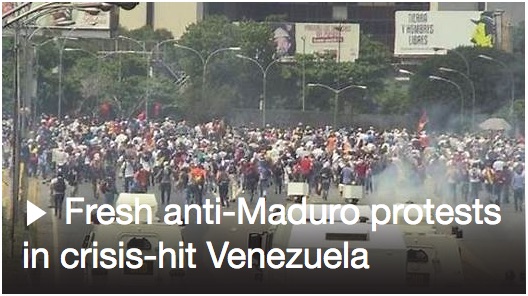 At the same time, food and medicine shortages are creating a humanitarian emergency. Shoppers, forced to wait in long lines to buy basic supplies, are often met by empty grocery shelves. Hospitals are suffering from acute shortfalls of everything from antibiotics, to basic sanitation equipment like medical gloves and soap.

The current protests were triggered by a Supreme Court decision to strip power from the National Assembly, the opposition-held Congress — a move widely thought to be aimed at concentrating power in the hands of Maduro's increasingly unpopular government.

... Gustavo Arnavat, senior advisor at the Center for Strategic & International Studies, told NBC News that these conditions "have produced a political and constitutional crisis that are precipitating the complete collapse of the state."

It's as if the recession, hyper-inflation and serious shortages just sort of showed up. But how did "these conditions" come to pass? Look who the NBC pair primarily blamed:

For decades, the country was controlled by a small elite and there was extreme disparity between the rich and poor. Late president (Hugo) Chavez was elected in 1999 on the promise that he would share Venezuela's immense oil wealth with the poor — the country derives 95 percent of its export earnings from petrochemicals.

Fueled by high oil prices that went from $10 barrel when he took office, to over $100 when he died of cancer in 2013, Chavez enacted a series of policies aimed at redistributing wealth. His government nationalized parts of the country's economy — from oil rigs to telecommunications firms to banks — forcing many companies to flee the country.

Even if one admits (which I don't) that over-the-top "income inequality" created conditions which led to Chavez's election (available information indicates that the country was in about the middle range among the world's nations in the Heritage Foundation's Economic Freedom Index at the time, which would then beg the question as to why other countries didn't suffer similar fates), NBC completely ignored what Chavez did once he achieved power:

He abolished the congress and the supreme court in the first year of his government.

... (a) new constitution included improved guarantees for human rights, but it also increased the powers of the president.

Shortly thereafter, Chavez engineered a de facto takeover of the state-run oil company, which up to that point had generally been run like a business, placing "loyal military commanders" in key posts. Since then, it has been poorly managed, and has failed to produce nearly as much oil as it did before the political takeover.

Chavez positioned himself as the successor of Simon Bolivar, considered "the patron saint of Venezuela," who "liberated a large part of the South American continent before his death in 1830," and who "ruled with an iron fist because he thought that South America was not yet ready for U.S.-style freedoms."

Bolivar wasn't a socialist in any genuine sense, but Chavez's gambit to appropriate his legacy worked.

This background is necessary to show how ridiculous the following paragraph from NBC's report is:

"Even former supporters of Hugo Chavez are starting to turn against the government and policies of president Maduro," he (Arnavat) added, referring to the current president's predecessor and father of "Chavismo" — a Latin American left-wing ideology following the principles of Simon Bolivar who fought for colonial independence from Spain.

Chavez didn't follow the "principles" of Bolivar, to the extent they even genuinely existed, at all.

The NBC reporters clearly wanted to lay the entire blame for the current situation on lower oil prices:

"If oil was still at $100 barrel, we would not be having this conversation," said Arnavat.

That simply doesn't fly. The best that can be said is that the current crisis would not have reached the critical point as soon as it has.

Chavez, praised by a New York Times movie critic in 2010 as a "good-hearted man of the people," accumulated, i.e., stole, vast wealth, now held by his daughter, estimated in 2015 at $4.2 billion.

Popular resistance to the government grew during Chavez's later years, and became even stronger shortly after Maduro's narrow election victory in 2013, all before oil prices dropped beginning in May of 2014.

In many ways, the rapid onset of crisis conditions brought about by oil price declines has worked to Maduro's advantage. Many people who are now spending hours in line hoping to be able to buy food, and who are growing weak from starvation (according to one survey, "nearly 75 percent of the population lost an average of at least 19 pounds in 2016" on the bitterly named "Maduro diet"), have no time for activism.

NBC's report only mentioned the word "socialist" once, in Paragraph 24 of 46. Even then, readers have to figure out for themselves that Maduro is a socialist from the following verbiage:

This week Maduro called for an assembly to rewrite Venezuela's constitution.

Opposition leaders say this is just a bid to stay in power by putting off regional elections scheduled for this year and a presidential vote in 2018. Opinion polls have suggested the socialists would lose both.

"You wanted your elections," Maduro said mockingly of the opposition while announcing the constitutional rewrite on Wednesday. "Here are your elections."

... it is socialism, not oil prices or the weather or greedy businessmen or any other such factor that's to blame for Venezuela's economic crisis. This is what socialism produces. Always and everywhere.

... Why do reporters ignore the obvious? We'd surmise that it's largely because liberal journalists are infatuated with the idea of socialism.

Sadly, yes, despite a century of disastrous contrary proof.