Prof at The Nation: CO2 'A Far More Deadly Gas' in Syria Than Assad's Chemical Weapons

On the day after Earth Day's "March for Science," it seems appropriate to point to a column by University of Michigan History Professor Juan Cole in The Nation, a far-far-left publication considered a credible and authoritative go-to-source by the liberal intelligentsia.

On April 18, Cole, echoing statements made during their final years in power by Barack Obama and his administration's officials with establishment press acquiescence, nonsensically claimed that Syria's biggest problem during the past decade has been ... carbon dioxide. Hardly.

According to Cole, CO2 is "a far more deadly gas" than what was used in "the gas attack in Syria on April 4" which has been tied by most intelligence sources to dictator Bashir Assad.

The alarmist climate-related claims in Cole's column are legion. But even if one were to accept them, it doesn't even begin to explain the nightmare that Syria has become.

Cole effectively gave away the fact that Syria's system of one-man rule dating back to 1971 and Assad's father, Hafez al-Assad, is primarily responsible for setting the stage for that country's human-rights catastrophe and ultimately its civil war, as seen in the final bolded passage in this excerpt:

The Other Poison Gas Killing Syrians: Carbon Dioxide Emissions
If Trump and his cronies really cared about children killed by noxious gases, they wouldn’t be trying to spew ever more CO2 into the atmosphere. 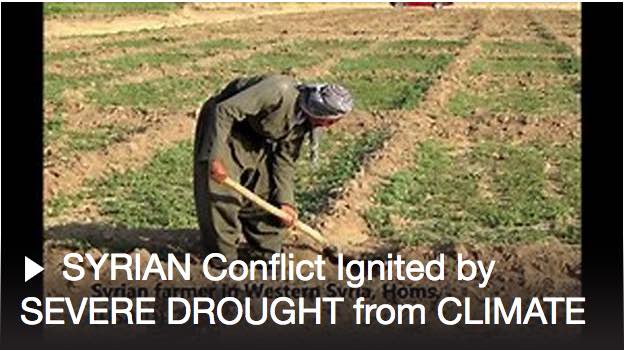 The gas attack in Syria on April 4 consumed the world’s attention and galvanized the Trump White House, leading to the launch of 59 cruise missiles on a small airport from which the regime of Bashar al-Assad has been bombing the fundamentalist rebels in Idlib province. The pictures of suffering children, Trump said, had touched him. Yet the president and most of his party are committed to increasing the daily release of hundreds of thousands of tons of a far more deadly gas—carbon dioxide. ...

... The Syrian civil war has left more than 400,000 people dead, among them graveyards full of children and innocent noncombatants. About half the country’s 23 million people have been left homeless, and of those, 4 million have been driven abroad (some of them contributing to Europe’s refugee crisis and its consequent rightward political shift). The war occurred for many complex reasons, including social and political ones. The severest drought in recorded modern Syrian history in 2007–10, however, made its contribution.

The mega-drought drove 1.5 million farmers and farmworkers off the land to the seedy bidonvilles ringing cities such as Homs and Hama. In the northeast, 70 percent of the farm livestock died in those years. These displaced and dispossessed day laborers, who seldom found remunerative new work in Syria’s stagnant urban economy, joined in the demonstrations against the regime. Some were later drawn into the civil war as militiamen. Others in the end fled their country.

Of course, Syria has had milder periodic droughts all through history. Moreover, some countries in the region, such as Israel, have been much better at water management than the decrepit Baath state in Syria. It matters how such crises are handled.

Is Professor Cole really telling us that Israel got along quite well, despite facing the same severe "mega-drought" as Syria?

The contrast between the two countries is even more remarkable than one might think. Sure, Israel is a relatively democratic, free-market nation, and as such would be expected to be a better steward of its finite resources and more effective in addressing problems as they arise.

But Israel has also been a water-use pioneer, as Ruth Schuster at Haaretz reported in early 2016:

The Secret of Israel's Water Miracle and How It Can Help a Thirsty World
From holistic management to advanced toilets, Israel has pioneered ideas that can help the planet manage its increasingly threatened water sources.

... "Israel should have been a water basket case," says (Let There Be Water author Seth) Siegel, listing its problems: 60% of the land is desert and the rest is arid. Rainfall has fallen to half its 1948 average, apparently thanks to climate change, and as global warming progresses, Israel and the whole Levant are expected to become even drier – and from 1948, Israel's population has grown 10-fold.

During that time, the country's economy grew 70-fold. But instead of starting to waste water, as happens when a society becomes wealthier, it used its new affluence to implement what Siegel calls "the Israel model" of water management.

Israel uses its groundwater and lakewater, yes. But key to its water security are efforts such as drilling deep wells, massive desalination, reusing treated sewage for farming, finding and fixing leaks early, engineering crops to thrive in onerous conditions, discouraging gardening, making efficient toilets mandatory, and pricing water to discourage waste. The state preached water conservation (note the TV ads not to be a pig in the shower) – and then there's the holy grail of Israeli water innovation: drip irrigation.

Drip, also called micro-irrigation, was the first watering innovation in thousands of years. Instead of flooding the fields with prodigious amounts of water and fertilizer, much of which get wasted, small amounts of both are dripped directly onto the plant's roots.

Drip, also called micro-irrigation, was the first watering innovation in thousands of years. Instead of flooding the fields with prodigious amounts of water and fertilizer, much of which get wasted, small amounts of both are dripped directly onto the plant's roots.

Netafim, which makes drip irrigation technology, says the technique saves 25%-75% pumped water compared to flood, on average. So, the farmer uses less water, fertilizer and sometimes pesticides, and is happy. The aquifers suffer less chemical pollution. The crops yield more (about 15%, say Netafim and some experts) and food prices drop, so the consumer is happy.

Everyone is happy, except some academics, who would like proof.

The rest of the linked article goes on to question whether drip irrigation conserves as much water as is claimed — but that's beside the point of this post.

The important point here is that Israel innovated and conserved its way out of the same problem Syria faced.

Syria has done almost nothing to address an ongoing, multi-decade problem because there has been no incentive to do so in its top-down, totalitarian government. Instead, the Assads have been perfectly content to perpetuate a system in which most of its inhabitants are mired in third-world poverty (194th out of 230 world nations in per capita gross domestic product).

Thus, Syria has not experienced the affluence which enabled Israel to be able to afford to address its problems. One also can't rule out the idea that the Assads in Syria have had no interest in adopting water-use technology, no matter how effective, employed by its despised next-door neighbor.

The message for Professor Cole here is that even if you buy into human-caused climate change, to which Haaretz's Schuster gave a nod, it doesn't explain Syria's implosion. What does explain it: That nation's nearly five decades of family-run dictatorship, combined with the Obama administration's failure to contain Bashir Assad when it could and should have — a failure even former administration officials have recently acknowledged in supporting the early-April U.S. missile strike there.

Sadly, as noted earlier, Cole's climate change-blaming has been the left's go-to excuse for explaining the Syrian disaster for some time. It was even trotted out by Barack Obama himself in 2015 to explain the rise in worldwide terrorism. The left-leaning establishment press eats this nonsense up without meaningfully challenging it.