As evidence that Donald Trump's presidential campaign, and then his transition team, were under surveillance by the Obama administration for political reasons continues to mount, the stubborn refusal by CNN's Don Lemon to acknowledge this reality is turning into a national joke. Thursday evening, Newsmax's Christopher Ruddy got so exasperated at Lemon's deep state of denial, that he asked: "Don, are you drinking Kool-Aid tonight?"

During the preceding nine-plus excruciating minutes, Lemon was simultaneously the left's propaganda minister and censor, frequently interrupting Ruddy, who has apparently been a frequent guest on CNN Tonight, as the Newsmax CEO's facial expressions betrayed awestruck disbelief at the host's ridiculous arguments and rude conduct.

In the first 8-1/2 minutes, seen here, Lemon first went after the military action Trump ordered in Syria, reminding Ruddy that then-private citizen Trump had advised President Barack Obama to "not attack Syria" in 2013, as the billionaire at the time thought "there is no upside and tremendous downside."

Ruddy was not aware of this change in position, but responded appropriately while turning the tables a bit: "You know what's really good. President Trump changes his mind, which you guys don't think he ever does. And if he sees facts, he can change his mind about things."

Concerning Syria, Ruddy could have reminded Lemon that the Obama administration chose to work with the Syrian government and Russia to remove Syrian President Bashir Assad's chemical weapons. In July 2014, then-Secretary of State John Kerry claimed on national TV that "We struck a deal where we got 100 percent of the chemical weapons out." The theory was that the Obama administration had thus avoided the conflict Obama had seemed to invite with his August 2012 "red line" comment in connection with the Assad regime's potential use of chemical weapons.

Sadly, events of the past week have proven that the resolution claimed in 2014 was false. But Lemon, instead of admitting that the Obama administration had naively trusted a rogue regime, chose to go after Trump for properly claiming that he inherited a mess in Syria.

Lemon then moved on to "this Russian investigation." He insisted that Trump's claims that the Obama administration was "tapping his phones" were "totally discredited" by the FBI, and that Trump's recent suggestion that Susan Rice committed a crime " was made "without a shred of evidence."

Ruddy reminded Lemon that the FBI only said that it was "not aware" of any surveillance, and then pointed out that there is no doubt that Team Trump's communications were surveilled. This caused Lemon to start an argument over what "surveilled" means, as the host claimed that "incidental" surveillance doesn't count. Ruddy failed to note as Fox News has at least twice reported that the surveillance often, and perhaps typically, had nothing to do with Russia, and therefore by default had to be seen as politically motivated. 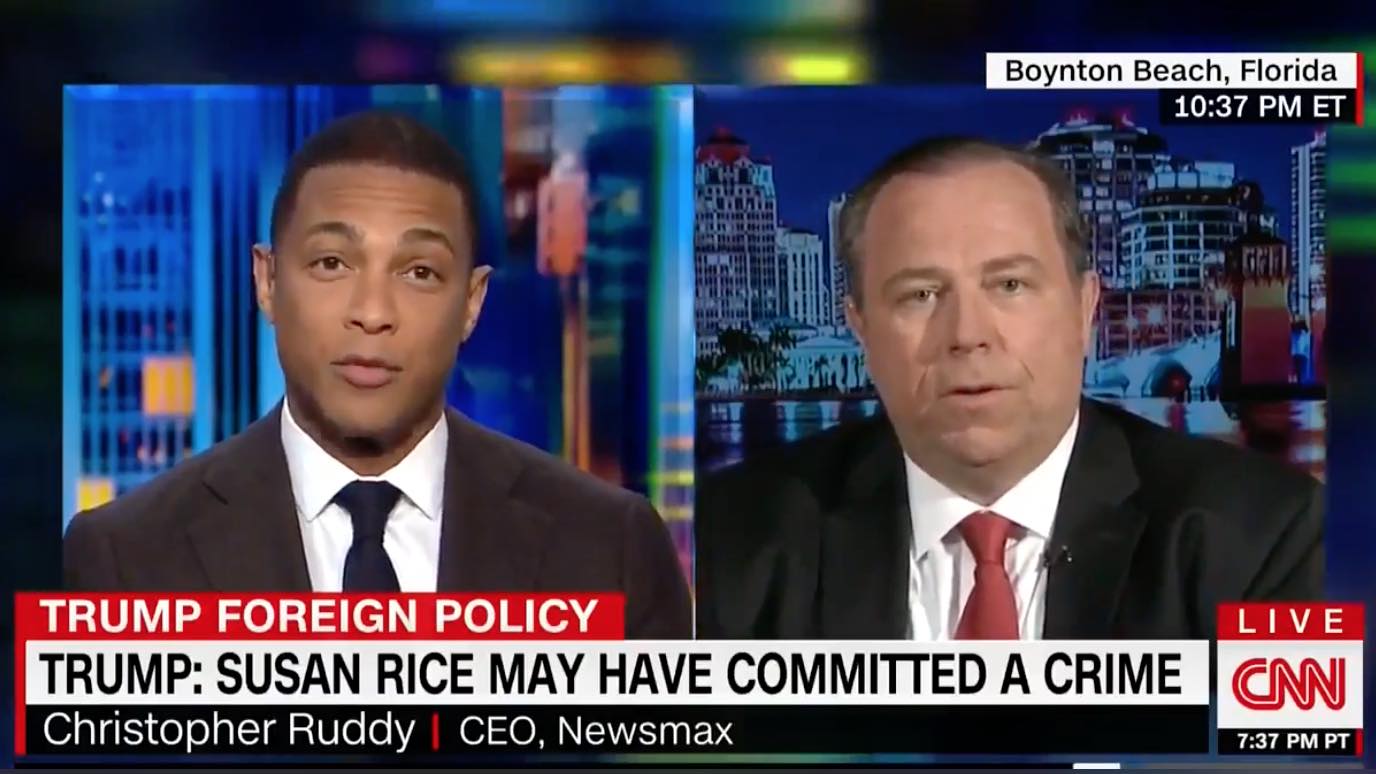 Lemon claimed that "the national security adviser just can't call up someone and say I want all the phone calls on Christopher Ruddy or Don Lemon." But that's exactly what Joseph diGenova — note, not someone hiding behind anonymity — is claiming Susan Rice did beginning one year before the presidential election, thus pushing the alleged surveillance effort back into 2015 (bolds are mine throughout this post):

... Other official sources with direct knowledge and who requested anonymity confirmed to The Daily Caller News Foundation diGenova’s description of surveillance reports Rice ordered one year before the 2016 presidential election.

Lemon, clearly out of ideas and arguments, lapsed into utter nonsense, raising whether there should be an investigation into whether "Don Lemon went to McDonald's today."

This takes us to the next minute or so of the interview. Ruddy went into the topic of how Trump's transition discussions with the leaders of Mexico and Australia were leaked within hours of their occurrence. As Ruddy observed that the Washington Post had reported these stories, Lemon remained in firm denial, claiming that there's no proof that they arose because of U.S. intelligence leaks. This led to Ruddy's ultimate expression of exasperation:

Transcript (verbiage presented is complete, but omits some interruptions which occurred with each party's statements):

We shouldn't do that, Christopher. That's doing a disservice to the American public.

CHRISTOPHER RUDDY, NEWSMAX: Do you agree, Don, do you agree when the President's private conversation with the Mexican President and the Australian Prime Minister, classified documents were leaked within several hours of those conversations. Do you agree that that was a violation of law?

LEMON: What if it's Mexico or Australia who leaked it? You're assuming that someone with a high-ranking position in the United States leaked that. And on some of those calls —

RUDDY: You think the Mexicans and the Australians leaked the conversations to the Washington (Post)? I mean, c'mon. You think that. Nobody (laughs). I mean, you think. C'mon. —

Lemon seriously wants us to believe that it's possible that separate leaks from each of the two countries involved were provided to the Washington Post virtually simultaneously.

The CNN host either didn't read the Washington Post very carefully, or was deliberately creating a false distraction. Here are the paper's descriptions of their sources at its related dispatch, which, despite its headline, addresses both countries:

... President Trump blasted Australian Prime Minister Malcolm Turnbull over a refugee agreement and boasted about the magnitude of his electoral college win, according to senior U.S. officials briefed on the Saturday exchange.

The Post clearly got its information from U.S. sources and not Australia or Mexico. Lemon's desperate counterpoint is false.

As to Lemon's fundamentally false defenses concerning the Obama administration's surveillance, John Nolte at the Daily Wire usefully detailed matters to date on Thursday ("Cover-up: 11 Things the Media Won't Tell You About Obama Spying On Trump"). It's a "read the whole thing" item, but here are three key points which squeeze all of the juice out of Lemon's defenses:

Look At How The Media Has Moved the ObamaGate Goalposts!

... If you recall, on March 4, the media again and again reassured us that the accusation Obama spied on Trump was a BIG FAT LIE! It never happened!

... With a straight face (betrayed by a glint of beady-eyed panic), today the media is telling us, "Of course Obama spied on Trump. This is normal and routine, so shut up, racist."

Obama Spying on Trump Is NOT "Normal and Routine"

... Susan Rice's highly unusual act of unmasking Team Trump was almost certainly done to ensure this intelligence would leak to a willing media, and the leaking of intelligence is a felony, and therefore not at all routine.

... Rice's Unmasking Had Zero To Do With Russia

Rep. Peter King is a member of the House Intelligence Committee and has seen the documents Rice unmasked.

... (King's description of those documents indicates that, in Nolte's words) This was purely a political operation. A police state in action, nothing more, nothing less.

No Kool-Aid is required to believe that the three assertions just made are credible.