Hardly News: Hundreds of Protesters Remain at DAPL Site, Not Involved in Cleaning Up Their Horrible Mess

Based on previous reporting I've seen, the presence of "hundreds" is a revelation. What's more, despite the oncoming environmental disaster caused by their trash, filth and abandoned items, up to and including cars and trucks, it's clear that most of those still there are standing by and observing the cleanup instead of helping with it. It's appalling that these immature, irresponsible children continue to receive presumptive press sympathy.

On January 31, in a mostly strong report, the Associated Press's Blake Nicholson conveyed a false impression. Perhaps he didn't mean to, but he did. Here's how it happened.

The bolded phrases in the following paragraphs from that dispatch would lead most readers to believe that all protesters except those involved in the cleanup were gone: 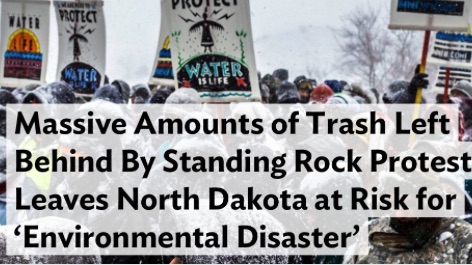 Cleanup of a North Dakota encampment where opponents of the Dakota Access oil pipeline stayed for months to protest the $3.8 billion project is expected to take weeks, a leader of the tribe that organized the protest said Tuesday.

The Standing Rock Sioux hopes to complete the work before any spring floodwaters from the Cannonball River can wash debris into the Missouri River — the very waterway pipeline opponents are working to protect.

... People who still have not left the camp are helping, bringing the total on the job to about 100, said (Thunder Valley Community Development Corp. executive director Nick) Tilsen, who is among the workers. Cost of the cleanup isn't yet known, but the tribe will use money from the $6 million in donations it has received to support its pipeline fight, (Tribal Chairman Dave) Archambault said.

What else are you supposed to believe when the reporter tells you that "opponents stayed there for months" (i.e., they were there, and now they're not), and that "people who still have not left the camp" (strongly implying that it's "all" who remain) "are helping"?

Well, that isn't so, and the fact that it isn't so sends the protest's hypocrisy meter into the deep red.

In a February 15 update of the cleanup situation, Nicholson effectively corrected a local TV station's early February estimate of the volume of trash present. The TV station reported that it would take 250 trucks to do the job. Unfortunately, it left out a zero. Nicholson directly revealed that there were (and still are) far more people at the protest site:

Federal and state officials announced plans Wednesday to accelerate cleanup at a camp in southern North Dakota that has housed hundreds and sometimes thousands of Dakota Access pipeline opponents.

... Local and federal officials estimate there's enough trash and debris in the camp to fill about 2,500 pickup trucks. Garbage ranges from trash to building debris to human waste, according to Morton County Emergency Manager Tom Doering.

The camp on federal land near the pipeline route has dwindled to a few hundred people as the battle over the $3.8 billion project to move North Dakota oil to Illinois has largely moved into the courts. The Standing Rock Sioux and others believe a pipeline leak under the Missouri River would contaminate water for millions of people. Developer Energy Transfer Partners says the pipeline is safe.

The tribe has asked protesters to leave the area, and has been coordinating cleanup at the camp since late last month. Chairman Dave Archambault said at the time it was being funded from $6 million in donations the tribe received to support its pipeline fight.

... Doering said local authorities are hoping for a presidential disaster declaration to open up the prospect of federal aid.

... Once ... (the trash disposal is) accomplished, crews will "clean up the land to a pre-protest state," he said.

The effort will be funded through the Corps budget, meaning taxpayers ultimately will foot the bill.

So all along there have been at least "hundreds" of protesters. Based on the cleanup operation's workforce of "about 100" reported two weeks earlier, most of the protesters are sitting around watching someone else clean up the mess they apparently continue to create, and that the thousands who left without picking up after themselves left behind.

On top of that that, they're blithely expecting both the tribe whose interests they claim to support and the $20 trillion in debt federal government to cut the checks to pay to clean up the protesters' mess. Please, I don't want to hear another word about protesters' dedication to environmental causes.

Here are his first two Monday paragraphs, followed by a paragraph containing a troubling measurement of the cleanup's progress:

As dawn breaks over an encampment that was once home to thousands of people protesting the Dakota Access oil pipeline, a few hundred holdouts rise for another day of resistance.

They aren't deterred by the threat of flooding, nor by declarations from state and federal authorities that they must leave by Wednesday or face possible arrest. They're determined to remain and fight a pipeline they maintain threatens the very sanctity of the land.

... More than 230 truckloads of debris have been hauled out as of Monday, according to the governor's office. Archambault said plans call for continuing the cleanup after Wednesday.

As noted, most of the protesters aren't involved in assisting with the cleanup, despite the fact that failure to complete it by the time flood season arrives will almost certainly harm the land's "very sanctity."

The 230 truckloads hauled out represents just nine percent of the 2,500 truckloads of trash and filth present. If that's all the cleanup crews have accomplished in the 20 days since Nicholson's January 31 report, the cleanup operation is in serious trouble, and desperately needs to pick up the pace.

The Army Corps of Engineers said it won't extend a Wednesday deadline for Dakota Access oil pipeline opponents to vacate their encampment on federal land in North Dakota.

... With flooding expected this spring, the Corps on Feb. 3 told the few hundred people remaining in camp that they must take their possessions and leave by 2 p.m. Wednesday.

Good heavens, they've had almost three weeks to vacate, and they just recently asked for a grace period?

Nicholson's Monday report also allowed the protesters to get away with presenting a strange definition of "peaceful":

Protesters who remain say they're prepared to be arrested, but will remain peaceful.

"We'll make it difficult for them to handcuff us, but there will be no forceful opposition," said Bryce Peppard, from Oregon.

If you're making handcuffing difficult, you're resisting arrest, which is a crime, and not "peaceful."

As was the case back in the days of Occupy Wall Street, it's hard to tell what's more offensive: the actions of the protesters and filth they've left behind, or the indulgence of the establishment media, which (with the AP's Nicholson for the most part a notable exception) continues to portray them as virtually heroic.