What a difference a decade and a different political party make.

In November 2005, Ohio GOP Congresswoman Jean Schmidt used the same "I'm just quoting someone else" technique to criticize a fellow Member which Massachusetts Democratic Senator Elizabeth Warren employed earlier this week to criticize since-confirmed Donald Trump Attorney General nominee Jeff Sessions. Schmidt was vilified to the point where she became the subject of ridicule on Saturday Night Live, while the intemperate Warren has become such an instant heroine on the left that she seems a likely favorably-portrayed subject of a skit this coming weekend, and a future candidate to host the show.

Schmidt broke a House rule (361) similar to Senate Rule 19, which Warren blatantly and deliberately broke when she quoted the late Ted Kennedy's criticism Sessions, who remained in the Senate until Wednesday, when he was confirmed.

Senate Rule 19 forbids "imput(ing) to another Senator or to other Senators any conduct or motive unworthy or unbecoming a Senator."

House Rule 361 applied to Schmidt in 2005 when she (video here) "read in debate extraneous material critical of another Member that would be improper if spoken in the Member’s own words" directed at the late Pennsylvania Congressman John Murtha.

At a news conference the previous day, Murtha, a 73-year-old decorated Marine combat veteran in Vietnam, had called for a full withdrawal of U.S. troops from Iraq.

The GOP House obliged Murtha's wish and seized the strategic initiative by scheduling a vote on immediate withdrawal. Badly outmaneuvered Democrats were furious that they were being forced to go on the record in support of or opposition to the idea. Here's most of what transpired, as reported on November 19, 2005 by the Associated Press (bolds are mine throughout this post):

House Republicans maneuvered for swift rejection Friday of any notion of immediately pulling U.S. troops out of Iraq, sparking a nasty, sometimes personal debate over the war following a Democratic lawmaker's own call for withdrawal.

The symbolic vote was intended to fail, and furious Democrats accused the GOP of orchestrating a political stunt. 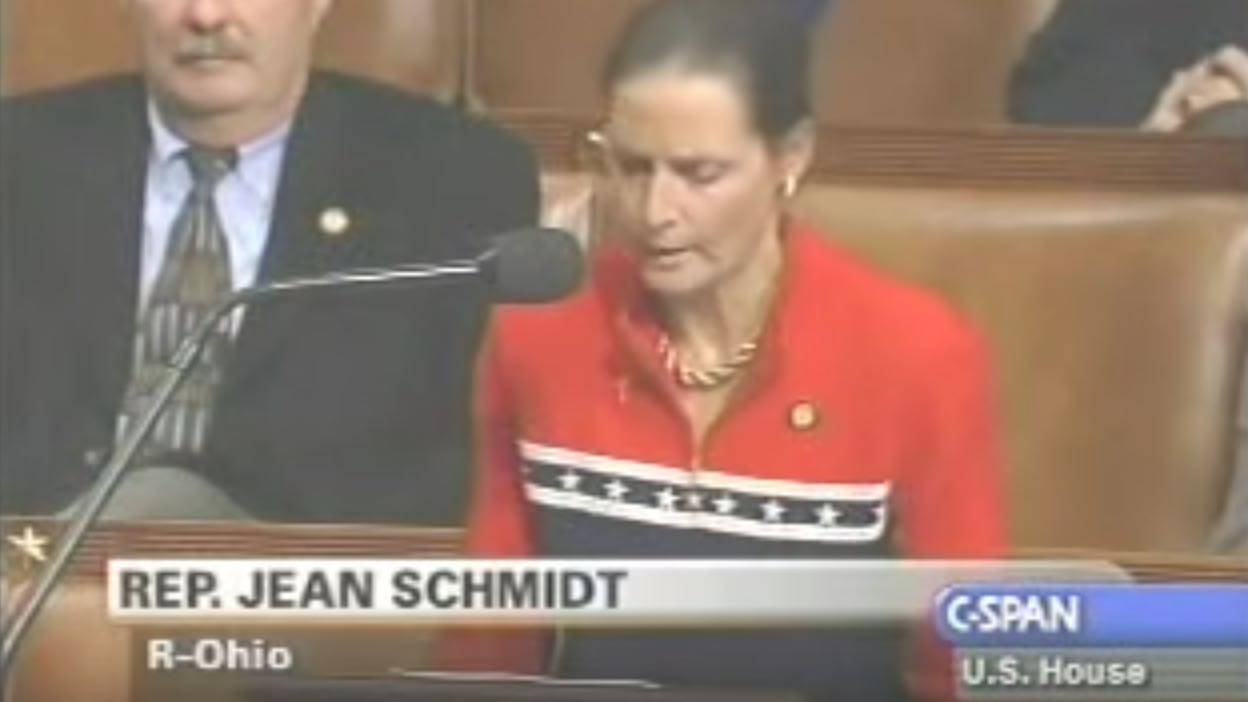 ... At one point in the emotional debate, Rep. Jean Schmidt, R-Ohio, told of a phone call she received from a Marine colonel.

Democrats booed and shouted her down — causing the House to come to a standstill.

Naturally, the AP's Liz Sidoti left important information damaging to Democrats out of its dispatch, as seen in this description of Ford's conduct captured at my home blog:

Harold Ford of Tennessee charged to the Republican side, waving his finger at Schmidt and other Republicans, yelling “Say it to Murtha!” or “Say Murtha’s name!” and had to be restrained by David R. Obey of Wisconsin.

Ohio Republican Jean Schmidt said Tuesday she should have rephrased her sharp critique of a fellow congressman's call to immediately pull troops from Iraq.

... Schmidt, who sent Murtha a note of apology on Friday moments after her speech, said in a statement Tuesday that she never intended to attack Murtha personally.

"While I strongly disagree with his policy, neither Representative Bubp nor I ever wished to attack Congressman Murtha," she said. "I only take exception to his policy position. 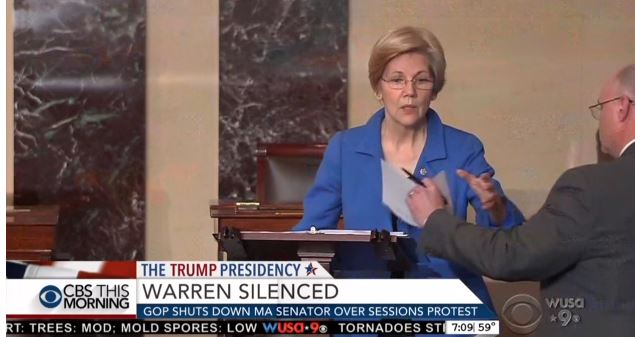 Republican leaders and the press pressured Schmidt to apologize. Democratic leaders like Chuck Schumer and the establishment press not only aren't visibly demanding anything of the sort from Elizabeth Warren, they're celebrating her deliberate, rule-breaking behavior.

Schmidt was ridiculed the very next weekend during Saturday Night Live's "Weekend Update" segment. The likelihood that SNL will ridicule Warren in any way, shape or form for her conduct if it does a skit on this week's theatrics is zero.