You would think that the establishment press and the rest of the opposition to Donald Trump's administration might be able to capitalize substantively (shrieking fundraising letters don't count as "substance") on Kellyanne Conway's shaky reference to "alternative facts" about a week ago. (She should have said, "I have different, more defensible estimates than you do, because she did.")

So far they can't, and they seem unable to help themselves. When they run into facts they don't like, they suppress them and seek out — you guessed it — weak or false claims to fit their narrative. There's hardly a better example of this than how the Associated Press handled last Thursday's release of the government's annual report on union membership. When the facts about nationwide union membership weren't pleasant, the wire service's unbylined report focused on just one state: Wisconsin.

The latest release from the government's Bureau of Labor Statistics effectively closed the book on what the Obama administration has done for organized labor. Despite (or maybe because of) all of the attempts at increased regulation of the labor market and the relentless posturing of Obama and his labor secretaries Hilda Solis and Tom Perez, the fact is that the labor movement is in far worse shape than it was in 2008, the final year before Obama took office, as seen in the following comparisons:

My oh my. From looking at this table one might think that the executive branch during the first eight years of this century were dominated by a public sector-friendly bunch of Democrats, and that the past eight years have seen unions across the board hurt by evil Republicans and conservatives. The opposite has been the case. While private sector union employment fell by nearly identical percentages during the George W. Bush and Barack Obama administrations, public-sector employment, which grew by over 700,000 during Bush 43, declined by a nearly identical number during the Obama era.

These facts weren't useful at AP, which for the first time in memory did not prepare a dispatch dedicated to the national results of this annual report. Instead, it focused the headline and all of its verbiage, in its Friday afternoon dispatch — but for two paragraphs and six words in another — to the single state of Wisconsin (bolds are mine): 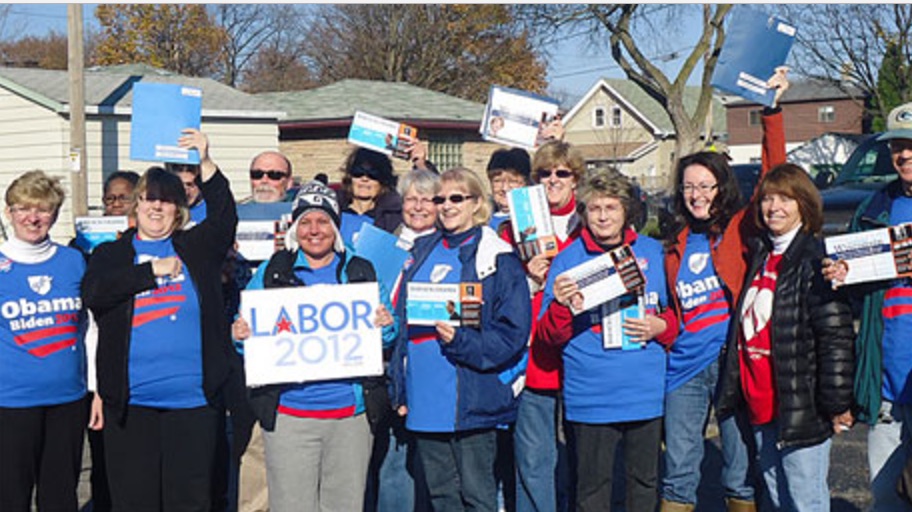 Union membership in Wisconsin has declined nearly 40 percent since legislation was passed that gutted collective bargaining for public workers, according to federal data.

The percentage of public and private workers who were union members was about 8 percent, or 219,000 people, in 2016, down by 136,000 members from 2010 levels, according to the U.S. Department of Labor. The agency's report shows the percentage of Wisconsin workers in unions is below the national average of 10.7 percent, The State Journal reported.

A 2011 law took away collective bargaining powers from nearly all public-sector unions in Wisconsin except over base wage increases no greater than inflation. With no power to bargain over workplace rules or anything meaningful related to salaries, membership in the statewide teachers' union and unions for state employees plummeted.

Membership in unions in Wisconsin tumbled further after the state in 2015 passed so-called right to work legislation, which prohibits businesses and unions from reaching agreements that require all workers, not just union members, to pay union dues.

The only nationwide information in the entire AP writeup is the 10.7 percent figure seen above. There's not a word about the serious overall national declines in union membership during the Obama administration. Those are facts the AP, whose journalists are mostly if not entirely members of the News Media Guild, doesn't like. So it didn't report them.

There is nothing resembling proof in the BLS report supporting AP's claim that "so called" right to work legislation — it's actually "right to work" legislation, which guarantees workers that workers do not have to pay union dues as a condition of employment — caused any portion of Wisconsin's union membership decline in 2016. Overall union membership in the Badger State dropped by only 4,000 in 2016 to 219,000.

While there's no breakdown between the private and public sectors in the related BLS table, it seems very likely that public-sector membership declined because of the continued impact of the 2011 legislation shepherded by Republican Governor Scott Walker and the state's Republican legislature the AP cited, and that private-sector membership either increased or was virtually stable.

Indiana became a right to work state in 2012. Despite court challenges, that law appears to have taken effect in 2013. Contrary to expectations, including those clearly expressed by AP in connection with Wisconsin, union membership in the Mike Pence-governed Hoosier State, has increased since 2012 by a stunning 24 percent, or 58,000, and now totals 304,000.

Again, because BLS doesn't break out public and private membership by state, one can't say for certain that private union membership in Indiana has increased. But the stats surely seem to point in that direction. If that's the case, right-to-work proponents who believe that such laws spur unions to work harder to genuinely represent their workers, something which unions in non-right-to-work states don't need be nearly as concerned about doing, would have support for their point.

The media-related lesson is that when the facts weren't pleasant, the AP chose to concoct their own narrative, deliberately ignoring the big picture. There's a saying about people in glass houses that the agenda-driven AP and the rest of the establishment press would be well advised to heed.