Because he was the "singular 2016 (GOP) presidential contender never to fall in line behind Trump," Ohio Governor and two-time former presidential candidate John Kasich now has the Associated Press's deep respect.

This largely explains why the wire service has been all too willing to ignore the fact that Kasich alone owns Ohio's impending budget problems.

AP Ohio Statehouse Correspondent Julie Carr Smyth's Sunday morning story about the status of Kasich's political career was inexplicably so important that the wire service decided it deserved national coverage at its main national and "Big Story" sites. Kasich's views are now suddenly so important that his take on Martin Luther King Day deserved to be mentioned in two separate national site stories.

Smyth's January 15 story reads like something a supporter who insists that their guy is still relevant would write (bolds are mine throughout this post):

In less than a year's time, Ohio Gov. John Kasich has gone from an "adult in the room" alternative in a fractious Republican presidential field, to a potential convention spoiler in Cleveland, to now facing a hostile new president who reached down personally to seize control of the state GOP. 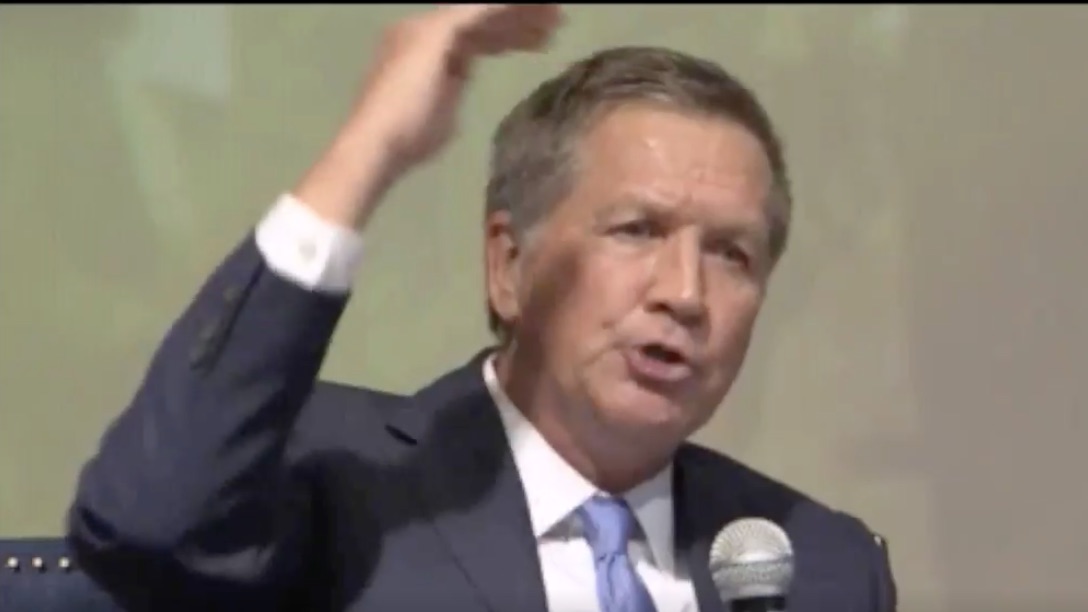 The roller coaster ride has left many wondering whether Kasich's political star and personal influence have faded. To this, Kasich had a direct answer this week: "You know (how) they talk about lame duck? They never met me."

With his characteristic defiance, Kasich has re-emerged in recent weeks after a period of retreat that followed a painful decision to concede his presidential ambitions for a second time.

The 64-year-old Republican has vetoed what would have been one of the nation's most restrictive abortion laws and Republican-backed legislation further delaying Ohio's alternative-energy mandates. He has resumed his public schedule in Ohio and scheduled appearances over the next week in Atlanta for Martin Luther King Jr. Day and in Washington to discuss health care with senators and attend President-elect Donald Trump's inauguration.

Kasich is Republicans' singular 2016 presidential contender never to fall in line behind Trump. His actions cost Kasich control of the Ohio Republican Party on Jan. 6, when then-Chairman Matt Borges was pushed out by Trump's favored candidate after the president-elect made personal phone calls to some central committee members.

Kasich's defeat at the ORP was especially sweet for Ohio conservatives and Tea Party activists, who remember all too well that their support in a tough 2010 gubernatorial contest carried the former congressman to a 2-point, 77,000-vote victory and saved his political career. But less than two years later, after engineering his own ORP coup which installed Borges, Kasich, who in 2011 tried and failed to install reforms similar to what Republican Governor Scott Walker successfully achieved in Wisconsin, turned his back on the people who made his ascendancy possible. Not coincidentally, promising post-recession Buckeye State job growth foundered after that, especially outside of Metro Columbus.

The most comical element of Smyth's "he's still relevant" dispatch is how she tried to prove that Kasich is still popular — by reaching back to a poll done (seriously) in October:

... Kasich has sustained voter support in his closely divided bellwether state. A Monmouth University Poll in October found that Kasich's anti-Trump stance hadn't hurt his overall favorability rating, though he has lost some support among fellow Republicans and gained some among Democrats.

The obvious riposte to this nonsense is that on November 8, Donald Trump, defying even the most optimistic expectations, won the Ohio presidential contest by over 8 percentage points over Hillary Clinton. It was the largest victory margin achieved by any presidential candidate in the Buckeye State since George H.W. Bush's 11-point defeat of Michael Dukakis in 1988. John Kasich was obviously among the hardest hit.

Finally, Smyth acted as if Ohio's impending budget-balancing problem just arrived out of the blue:

During public events this week, Kasich espoused a message that's equal parts John F. Kennedy and Mr. Rogers, urging people to ask not what politicians can do for them, but to "stick your nose in somebody else's business" to help solve society's tough problems. Bracing the state for a painful budget cycle, he says that every person is special and that the country needs people engaged in their communities to effect change.

Sorry, Julie, the blame for this "painful budget cycle" rests entirely on John Kasich's shoulders. Here's why, as I explained in an April 2014 column at another website (links are in original; some paragraph breaks added):

After opposing Obamacare, Kasich turned around and championed Medicaid expansion. He spent months trying to shame opponents into supporting him by playing the "Christian" card, i.e., "You're not really a Christian if you won't support this."

When legislators still balked, he went around them and took his case to the Controlling Board, an obscure state agency which normally deals with completely unrelated matters. When it looked like the sitting members of the Controlling Board wouldn't do his bidding, the Governor had the House Speaker arbitrarily replace two members who planned to oppose the move with supportive lackeys.

The Wall Street Journal correctly described Kasich's heavy-handed move as "lawless." Washington isn't the only place where tyranny ("arbitrary or unrestrained exercise of power; despotic abuse of authority") has gained a foothold.

As seen in a March 2016 column at Forbes by Akash Chougule of Americans For Prosperity, Ohio's current budget mess is entirely due to Kasich's imposition of Medicaid expansion:

Kasich’s Obamacare expansion has enrolled more able-bodied adults than the state thought would ever sign up. This enrollment explosion has resulted in $2.7 billion of budget overruns in just the first two years of the program. The overruns have left lawmakers scrambling, as the state’s share of costs come due in the current biennium budget. Overruns also mean less funding for important budget priorities like public safety, education and the truly needy.

Blogger Jason Hart, who has followed Ohio's Medicaid disaster like a hawk since its inception, wrote in 2015 that "Ohio’s Medicaid expansion is wildly over budget, but people who rely on the state’s legacy press probably have no idea." Indeed — and things have only gotten worse since then.

As if to prove Hart's point, Smyth's regionally-carried January 13 AP story, glowingly headlined "Kasich outlines 2017 vision in face of Ohio budget shortfall," did not mention Medicaid at all. But it did let Kasich play the Christian card again:

He urged Ohioans to help each other out in their own communities, whether in fighting infant mortality and human trafficking, improving education or tackling the opioid crisis.

“Stick your nose in somebody else’s business. That is what the Lord wants,” he said. “Live a life a little bigger than yourself.”

Well, okay, but John Kasich and his apparent new fans at the AP need to remember that the Lord also has a commandment which demands that we tell the truth. The truth is that Kasich's unilaterally imposed Medicaid expansion now has the Buckeye State on the financial ropes.