No review of the reactions of leftists and the establishment press (but I repeat myself) to the death of Fidel Castro would be complete without seeing what the wonderful, caring people at Black Lives Matter wrote after the Cuban dictator died.

BLM's reaction is at a website called Medium.com. Since that post doesn't link elsewhere, it was possible to hope that the content there doesn't officially reflect the group's views. Alas, that isn't so. The press's failure to mention BLM's sanctioned outrageous and offensive reaction to Castro's death, as well as its failure to even try to get comments from Democrats who would (hopefully, but who knows any more?) denounce and renounce the poison contained therein, up to and including President Barack Obama, is sadly typical and irresponsible.

The Medium.com post ("Lessons from Fidel: Black Lives Matter and the Transition of El Comandante") went up on Sunday, November 27. There is no named author, but it is at an account called "Black Lives Matter," and contains its logo.

Still, it would appear that anyone could set up such an account, so it could conceivably be unfair to automatically associate the post with the group's overall views. Unfortunately, though, the post involved is linked at the official Black Lives Matter home page (in the third column, but not for long), as well as to posts at its Facebook and Twitter accounts:

Thus, there is no doubt that BLM owns the sentiments expressed in the Medium.com post. Here are its most damning portions (bolds are mine):

Lessons from Fidel: Black Lives Matter and the Transition of El Comandante

We are feeling many things as we awaken to a world without Fidel Castro. There is an overwhelming sense of loss, complicated by fear and anxiety. Although no leader is without their flaws, we must push back against the rhetoric of the right and come to the defense of El Comandante. And there are lessons that we must revisit and heed as we pick up the mantle in changing our world, as we aspire to build a world rooted in a vision of freedom and the peace that only comes with justice. It is the lessons that we take from Fidel. 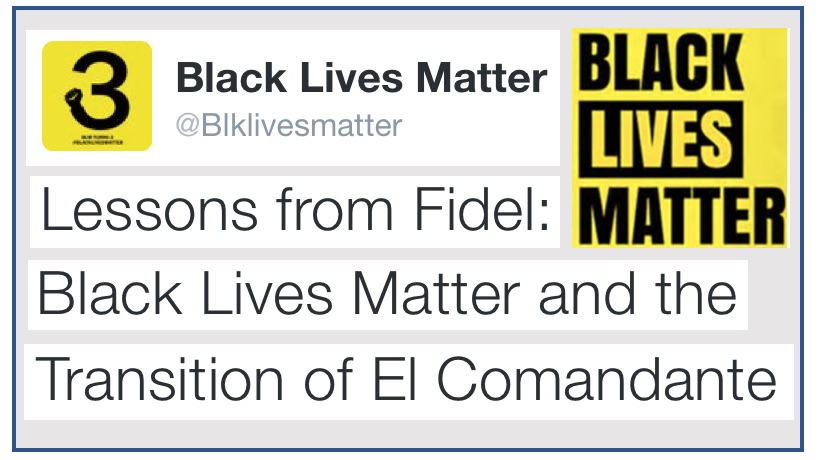 ... Revolution is continuous and is won first in the hearts and minds of the people and is continually shaped and reshaped by the collective. No single revolutionary ever wins or even begins the revolution. The revolution begins only when the whole is fully bought in and committed to it. And it is never over.

Revolution transcends borders; the freedom of oppressed people and people of color is all bound up together wherever we are. In Cuba, South Africa, Palestine, Angola, Tanzania, Mozambique, Grenada, Venezuela, Haiti, African America, and North Dakota. We must not only root for each other but invest in each other’s struggles, lending our voices, bodies, and resources to liberation efforts which may seem distant from the immediacy of our daily existence.

Revolution is rooted in the recognition that there are certain fundamentals to which every being has a right, just by virtue of one’s birth: healthy food, clean water, decent housing, safe communities, quality healthcare, mental health services, free and quality education, community spaces, art, democratic engagement, regular vacations, sports, and places for spiritual expression are not questions of resources, but questions of political will and they are requirements of any humane society.

... A final lesson is that to be a revolutionary, you must strive to live in integrity. As a Black network committed to transformation, we are particularly grateful to Fidel for holding Mama Assata Shakur, who continues to inspire us. We are thankful that he provided a home for Brother Michael Finney, Ralph Goodwin, and Charles Hill, asylum to Brother Huey P. Newton, and sanctuary for so many other Black revolutionaries who were being persecuted by the American government during the Black Power era. We are indebted to Fidel for sending resources to Haiti following the 2010 earthquake and attempting to support Black people in New Orleans after Hurricane Katrina when our government left us to die on rooftops and in floodwaters. ...

One does not have to be on the right to condemn Castro as the murderer that he was. All one has to be is human, and humane. Among many other sad facts about Castro there are these:

Additionally, Georgie Anne Geyer, in her 1991 biography of Castro (Guerrilla Prince: The Untold Story of Fidel Castro) recounted an episode where, as a college student in the mid-1940s, Castro himself killed a rival gang leader and student election opponent, Leonel Gomez, in cold blood, and admitted that he did it to a friend to whose apartment he quickly fled.

The claims that "the revolution is continuous ... and never over" would strike the average non-favored Cuban as a sick joke. Once Fidel took over, time first stood still, and then went in reverse. All economic progress stopped, and the country regressed. Cubans farmers still use oxen to plow their fields. The only thing that Raul Castro can hope is "never over" is the "collective" communist tyranny over which he now presides. (I also must note here that the Associated Press, in what could and probably should be considered a stark reveal of its writers' genuine sympathies, bought into the Communist idea of never-ending revolution in one of its first dispatches after Castro died.)

The inclusion of "Palestine" in the litany of countries recited in the next paragraph is consistent with BLM's consistent and brazen anti-Semitism, and with the fact that the movement has far more in common with Islamic terrorists than most people will dare admit.

The inclusion of "North Dakota" in that same paragraph may seem odd. But BLM has aligned itself with violent protesters at Standing Rock who are trying to prevent the construction of the Dakota Access Pipeline. Thanks to recent Obama administration appeasement, they may have succeeded. The fact that union jobs are thus in jeopardy seems not to matter.

Finally, let's look at the BLM Murderers' Hall of Shame:

So Black Lives Matter is publicly thanking Fidel Castro for harboring cop-killers and a murderer, and publicly lionizing the violent Black Power movement of the 1960s and 1970s, which arguably did more to divide America racially and to perpetuate those divisions than any movement since the Ku Klux Klan.

Even the tiny-fringe, white nationalist Alt-Right movement — which, by the way, Donald Trump has now renounced at least "25 times" — doesn't (at least openly) support and heap praise on cold-blooded cop-killers and murderers. But Black Lives Matter, in an officially sanctioned post, has done just that. Yet the Democratic Party continues to endorse and embrace it. Why isn't the press hounding Democratic Party politicians and insisting that they denounce and renounce this dangerous, radical and violent movement?

Until those denunciations arrive, the presumption has to be that the Democratic Party's leaders and rank and file are fine with the contents of BLM's November 27 Medium.com post praising Fidel Castro and the cop-killers he and his brother Raul have harbored.