NY Times, on Ohio's Presidential Vote, Captures Only a Portion of the State's Dramatic Shift

Considering that it's coming from the New York Times, reporter Sabrina Tavernise's account of what happened in Ohio to swing it from a close Obama win in 2012 to a near-blowout for Donald Trump in 2016 was reasonably well-done, but still had glaring flaws.

Her story's human interest elements were strong, but the accompanying statistics provided were sparse, and really needed to be there to tell the full tale. Tavernise's biggest failures were first, not describing how historically large Trump's Buckeye State victory margin was, and second, neglecting to attribute a large portion of that margin to sharply lower overall turnout among Democrats. Those two elements enabled her to avoid entertaining the possibility that Ohio — but to be clear, not necessarily the rest of the nation, or even the Midwest — may have just experienced a potentially seismic electoral realignment.

Before excerpting the Times writeup, I have to take a shot at a preelection Associated Press story. On October 27, the AP's Dan Sewell, literally based on an interview with one guy, a registered Republican who contended that "The party needs to jettison Donald Trump in order to survive," claimed that "many Republicans are finding reasons to back away from a nominee whose provocative rhetoric and treatment of women appall them."

That was obviously a ludicrous claim at the time, and was rendered even more ridiculous once the ballots were counted. Ohioans who voted this year, perhaps more than any other state in the union, responded to their electoral choices in the way Heather Higgins described it at National Review on Thursday: "while most had not favored Trump at the beginning of the election season, they were convinced that the gravity of this turning point for our country superseded their concerns about Trump’s flaws."

The Sunday before Election Day, the Columbus Dispatch's notoriously weak mail-in poll showed Hillary Clinton ahead in the state by a one-point, 48 percent to 47 percent margin. Most other polls showed Trump ahead, but barely. The Real Clear Politics average of polls on Election Day, which inexplicably included the Dispatch poll despite its horrible track record, had Mrs. Clinton ahead in Ohio by 2.2 points

Instead, Trump won by 8.52 percentage points and 455,000 votes (perhaps subject to very minor changes). His victory margin was the largest since George H.W. Bush defeated Michael Dukakis in 1988 by 11 points and 477,000 votes.

Very few, if any, of even Trump's strongest believers thought he would win Ohio by as much as he did. Trump's win represented a turnaround of over 620,000 votes and 11-plus points from Barack Obama's 166,000-vote, 3.0-point Buckeye State win over Mitt Romney in 2012.

At the Times, Tavernise at least acknowledged that a large element of that turnaround involved voters who supported Obama in 2012 moving over to Trump this time (bolds are mine):

Ohioans, Tired of Status Quo, Flipped to Trump for Change

Gerry Noble, a 64-year-old electrician from northeast Ohio, voted for President Obama in 2012 because “he was trying to help the common man.”

But he scoffs when asked about Hillary Clinton.

So, in this election, Mr. Noble, a lifelong Democrat, broke with the tradition of his union, the International Brotherhood of Electrical Workers Local 540, and voted Republican.

“I voted for Trump, and I’m not ashamed of it,” he said. “He’s straightforward and honest. He’s pragmatic. At least he’s willing to try something different.” 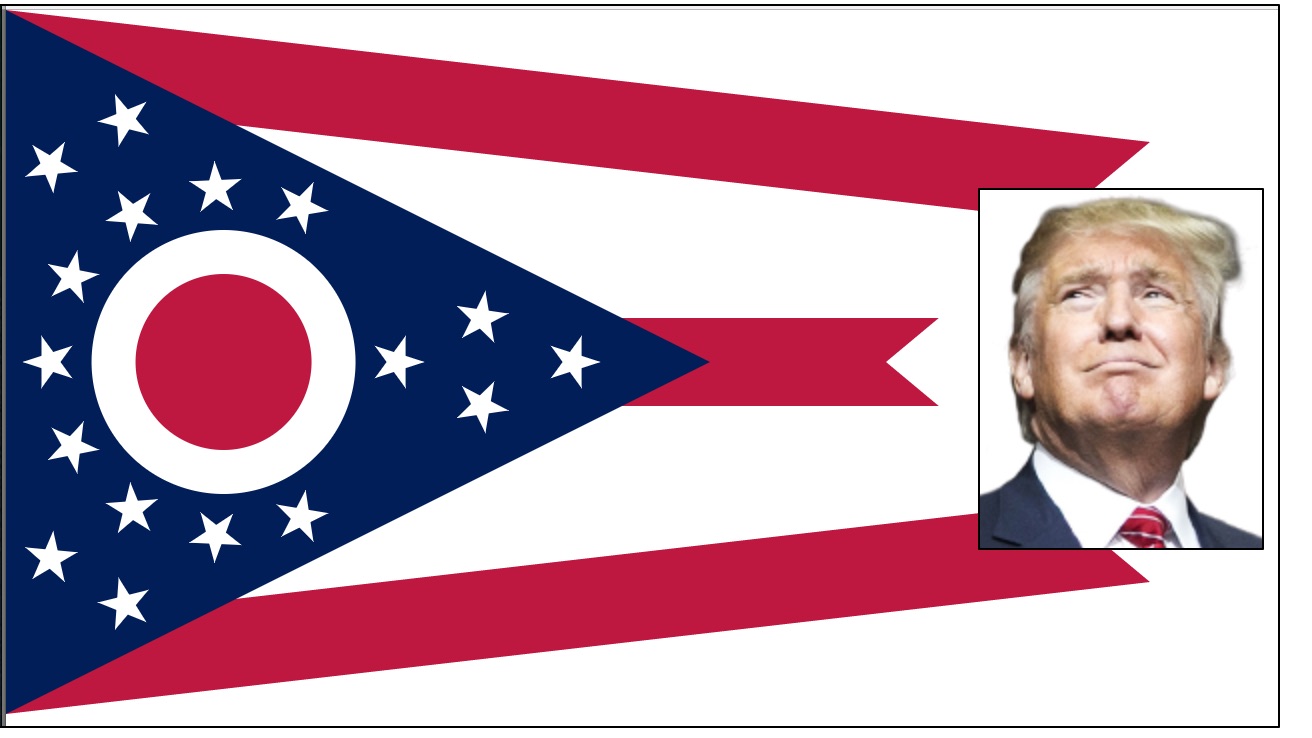 The seeds of the biggest upset in American politics in recent memory were sewn here, in the Midwest, where decades of economic decay largely ignored by Democrats came back to haunt Mrs. Clinton. Mr. Trump’s populist economic message electrified blue-collar workers in ways that those of previous Republican candidates had not.

The result was overwhelming support for Mr. Trump that polls utterly failed to predict, lifting turnout among Republican voters and even turning some reliably blue counties red. Stark County, a former manufacturing center south of Cleveland where voters have chosen Democrats in the past three presidential elections, was one of more than 215 that flipped to Mr. Trump.

While it can't be denied that Ohio has experienced "decades of decay," a too-large portion of it came during this century's first decade, thanks to "Republican" Governor Bob Taft's disastrous, tax-increasing second term and the over 400,000 jobs lost during the term of his successor, Democrat Ted Strickland. These disasters were bad enough, but the Obama economy's failure during the current decade to achieve a genuinely decent recovery was the straw that broke the camel's back.

This is crucial, because the Tavernise's writeup acts as if the pain occurred consistently over "decades." Not at all, Sabrina. The real pain in Ohio, outside of Columbus, which recovered nicely for same reasons Metro DC's economy has always done well through national economic thick and thin, was felt in the last several years before and then during the Obama era. Readers may also note that this reality runs counter to the "Buckeye State Miracle" narrative current Governor John Kasich promoted during his brief presidential run. The truth is that Ohio's economy got off to a somewhat promising start during Kasich's first 18 months in office, and has faltered in comparison to the rest of the nation. The decline in the state's labor force by over 230,000 compared to nine years ago has been especially galling.

In later text, Tavernise spent several paragraphs on a 23 year-old electrician who voted for Obama four years ago but supported Trump this year as "turned off by the constant talk of racism."

That person's story plus the paragraphs excerpted above make a mockery of the tune the Times's Editorial Board refuses to stop playing, namely that Donald Trump won because of racism, misogyny and "hate," which it has called on Trump to "reject." Since those factors don't explain his support, Trump has no need to do so. On the other hand, given the violent protests seen in Portland and Seattle on the West Coast and in certain other U.S. cities, it would seem that the Times should be asking President Obama and Mrs. Clinton to condemn and reject the hateful destruction and disruptions which are taking place — which of course it hasn't.

As noted earlier, Tavernise's second big miss related to turnout. Her writeup contained only the glancing reference to higher Republican turnout seen above and ignored far lower turnout among Democrats.

The fact is that the number of Ohioans who cast a presidential vote in 2016, even with a very small increase in the adult population during the past four years, was down by over 5 percent, or about 290,000 votes, from 2012. Only 5 of Ohio's 88 counties had more presidential voters than four years ago. Despite that, Donald Trump got 50,000 more votes than Mitt Romney did four years ago, while Gary Johnson, Jill Stein and other candidates increased their total take by about 170,000.

The point is that the urban-dominated counties which have been Democrats' Ohio salvation in the past have declined in importance for at least the past two decades, and totally failed to deliver this year. Thanks to falling populations and party-affiliation switches by many of the inner-suburban residents who remain in those counties (a development Tavernise correctly noted), it's hard to see why this trend won't continue.

Combine that with the huge gains Trump made in rural counties, more reflected in the percentage of the vote taken than in the number of votes received, and it seems that Republicans might be in a good position to continue winning elections for some time.

No wonder Sabrina Tavernise at the Times didn't dig any deeper, or decided not to report on it if she did.