AP Headlines Schlafly as 'Far-Right,' Describes Her Group As 'Ultraconservative'

The death of conservative icon Phyllis Schlafly set off the predictable leftist social media hatefest overnight, and naturally gave rise to a "graceless" obituary in the New York Times.

While it's a bit of a relief that Jim Salter's obituary at the Associated Press was not as hostile as the quite left-leaning wire service has been towards deceased conservatives in the past (e.g., Tony Snow in 2008), his writeup was seriously marred in several spots. The two most critical flaws involved labeling. Both are instructive, because the AP almost never uses equivalent labels for people on on the left side of the political spectrum, especially in obituaries.

The AP's headline is as follows:

Someone other than Salter likely employed the term "far-right," in the headline, but he also ignorantly used it in his content:

Schlafly rose to national attention in 1964 with her self-published book, "A Choice Not an Echo," that became a manifesto for the far right. The book, which sold three million copies, chronicled the history of the Republican National Convention and is credited for helping conservative Sen. Barry Goldwater of Arizona earn the 1964 GOP nomination.

The argument that Schlafly was "far-right" — while the AP and the rest of the establishment press almost never refers to anyone, even those who are violently so, as "far-left," is absurd.

Even if one contends that she was more conservative than the majority of Americans, her 1964 support for Republican presidential candidate Barry Goldwater put her in sync with 38.5 percent of the electorate. Twenty years later, Schlafly-supported conservative Ronald Reagan, whom opponents constantly and dishonestly denigrated as "far-right," won 59 percent of the presidential vote. That combination would argue for the idea that Schlafly, regardless of how the political winds happened to be blowing, was, over the long-term, almost squarely in the middle.

There is no doubt that the majority of Americans wished to defeat what was called the Equal Rights Amendment once the agenda of the amendment's proponents had been sufficiently exposed in the late-1970s. 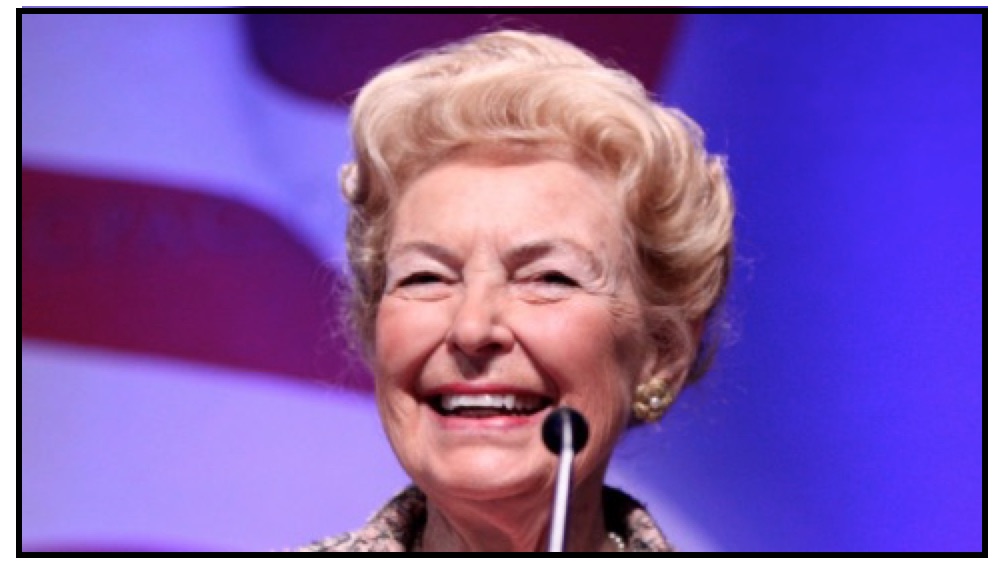 The defeat of the ERA, which she almost singlehandedly orchestrated, is Schlafly's signature accomplishment on at least two levels. First, it stopped a nice-sounding but in reality horrible change to the U.S. Constitution, and second, it taught conservative activists that they could win big fights.

Schlafly's simple formula for success, and her primary strategy: "I just used facts and quoted what they said.” This included going back to the original academic manifesto which largely fueled the ERA effort, and to a book co-authored by eventual Supreme Court Justice Ruth Bader Ginsburg advocating fundamental change in the idea of the family, because the traditional structure, "with husband breadwinner and wife homemaker, must be eliminated."

If Schlafly was "far-right," then every party-line Democrat, especially today, is far-left.

But don't party-line Democrats, or even socialists or communists, get labeled "far-left"? Perhaps elsewhere, but not at AP, and especially not in obituaries.

The AP's obits for Chicago Seven members Abbie Hoffman and Jerry Rubin in 1989 and 1994, respectively, conceded that the group and their "Yippie" movement were "radicals." But "far-left," and even "left" as a word by itself, never appeared in either writeup. Hoffman was arrested 42 times, including once in 1987 with fellow protester Amy Carter, the former President's daughter. Rubin once told a friend that "he used LSD 300 times."

More generally, "far-left" is a term seldom seen in news reports at the AP or elsewhere, while "far-right" makes appearances so often that compiling them would turn into one's life work. (Direct search comparisons are difficult, because "far left" is also used as the starting point in many photo captions.)

Perhaps the most pertinent labeling comparison is to the AP's Betty Friedan obituary in 2006. It never used the word "left" in a political context to describe Friedan, who is considered a feminist icon, let alone "far-left" or even "liberal," even though the feminist movement toes the liberal-left party line and consistently denigrates the genuine accomplishments of women who don't totally agree with their agenda.

That Friedan was far-left is beyond dispute. As David Horowitz wrote in 1999, "she was a political activist and professional propagandist for the Communist left for a quarter of a century" before her book The Feminine Mystique became a bestseller, and her book "had more to do with her Marxist hatred for America than with any of her actual experience as a housewife or mother." That "experience" as a "housewife" included having had a full-time maid.

Salter's Schlafly obituary mentions Friedan as infamously telling Schlafly to her face, "I'd like to burn you at the stake." What he didn't note, and certainly should have, is Schlafly's classic response: "I'm glad you said that, because it just shows the intemperate nature of proponents of ERA."

A commenter at Salter's story as published at the Denver Post put it quite succinctly: "Anyone that thinks she was 'far right' is far left."

The other term Salter inserted into his Schlafly obituary is "ultraconservative." He used it to describe Schlafly's activist group:

... she told The Associated Press in 2007 that perhaps her greatest legacy was the Eagle Forum, which she founded in 1972 in suburban St. Louis, where she lived. The ultraconservative group has chapters in several states and claims 80,000 members.

Again, anyone who objectively reviews the content of "Eagle Rising," the group's primary news and information site, could only paraphrase the Denver Post commenter cited above: Anyone who thinks that Eagle Forum is "ultraconservative" is ultraliberal.

In case anyone is wondering, searches at the AP's main national site and at its "Big Story" site for the term "ultraliberal" each returned no results.