In a Tuesday morning dispatch, the Associated Press's Josh Lederman, in covering President Barack Obama's visit to Midway Island, was up to the task.

Lederman, as seen in this excerpt from his report, thought that President Obama's description of the island as "hallowed ground" referred to native Hawaiian tradition (HT Claudia Rosett at PJ Media; bolds are mine throughout this post): 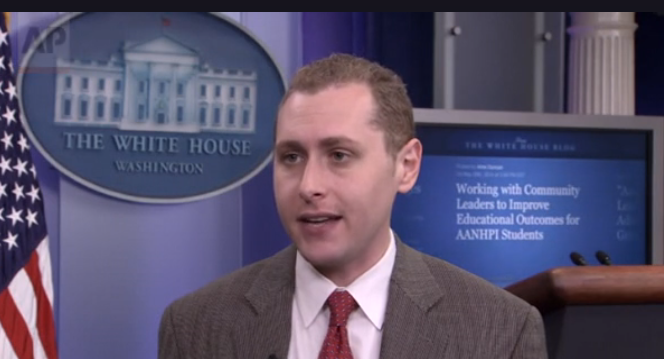 Few Americans have ever visited Midway, with its black-footed albatrosses and spinner dolphins - and that's exactly Obama's point. His visit to the atoll - home to fewer than 50 people - was carefully orchestrated to showcase natural beauty mostly untouched by humans, part of the president's bid to instill his calls for conservation with a sense of real-life urgency.

Squinting in the sunlight, Obama described Midway Atoll as "hallowed ground," a nod to the place it occupies in Native Hawaiian tradition. Yet Obama had a policy argument to make, too: It was critically important to examine what damage climate change is inflicting on communities in the Pacific Ocean.

"There are countries that now are at risk, and they have to move as a consequence of climate change," Obama said.

Yes, Obama really said that there are "countries" at risk, and that if they have to move, it will be our fault for having warmed the planet.

In context, you would think that he was referring to nations with huge land masses "at risk" of disappearing because of rising sea levels that have to "move" somewhere else. But a list found here refers to 12 countries supposedly at risk from a sea level rise of 1 meter, or 39.4 inches, and only a few them entirely consist of relatively small islands. The UN’s Intergovernmental Panel on Climate Change predicts a rise of 17 inches — by 2100.

Seven years ago, the "one scientist who knows more about sea levels than anyone else in the world" said that "the sea is not rising," and "It hasn't risen in 50 years." Another study in 2014 claimed that the rise is 7 inches per century, and that, contrary to alarmists' claims, it's not accelerating. At worst, if a few island nations disappear, it would far more likely be due to normal sea level fluctuations which have occurred over centuries and not because anything human beings did or didn't do.

As to Lederman's "hallowed ground" characterization, readers can be forgiven for believing that Obama, given his irritating habit of ignorantly relaying most alarmists' claims as supposedly settled science, might be capable of something like what the AP writer described. But the President didn't say what Lederman claimed, as seen in these opening sentences of his actual speech:

THE PRESIDENT: Well, let me start by saying that this is hallowed ground. As I said before, the Battle of Midway was a turning point in the battle for the Pacific and World War II. An incredible number of young men lost their lives here protecting our freedom. And for us to be able to visit this monument and remind ourselves of the sailors and airmen and everyone involved who were able to rebuff a Japanese force that vastly outnumbered them is a testament to their courage and their perseverance.

It is also spectacular as an ecosystem. And our ability to not just designate, but build on, this incredible natural beauty, which is home to 7,000 marine species that sees millions of birds, many of them endangered, sea turtles, the Hawaiian monk seal, black coral -- all sorts of species that in many other places we no longer see -- for us to be able to extend that 550,000 miles in the way that we've done ensures not only that the Midway Atoll is protected, but that the entire ecosystem will continue to generate the kind of biodiversity. It allows us to study and research and understand our oceans better than we ever have before.

It's also critically important for us to examine the effects that climate change are taking here in the Pacific Ocean, the world's largest body of water. And as I said yesterday, there are countries that now are at risk and may have to move as a consequence of climate change.

Obama was clearly referring to Midway as "hallowed ground" because of the World War II battle there.

Lederman's claim that the 2.4-square-miles of Midway Island is some kind of unique "hallowed ground" for "native Hawaiians" is also not even the case.

The entire 583,000 square mile area of the Marine National Monument is considered "a sacred area, from which Native Hawaiians believe all life springs, and to which spirits return to after death." Midway is no more or less significant than any other island in the area. Lederman's writeup would lead readers to believe Midway itself has some unique element of sacredness, and it doesn't.

So, as noted earlier, we have a threefer:

Northwestern University, from which Lederman graduated, needs to take a serious look at the curriculum at its Medill School of Journalism. I would suggest that the AP work on its quality control, but that ship has mostly sailed.