Adam Ragusea, writing at Slate.com, believes that the word "terrorist" has become "uselessly arbitrary and loaded," because it "has acquired a powerful religious—and specifically Islamic—connotation" that "is substantively consequential."

As a result, Ragusea believes that the Associated Press, whose Stylebook sadly exerts nearly ironclad control over language used in U.S. establishment press journalism, should follow the lead of Reuters and stop using that word. Oh, and based on looking at what Reuters shamefully did with little fanfare, the word "terrorism" also needs to go.

As we'll see later, Ragusea, who is "a journalist in residence and visiting assistant professor at Mercer University’s Center for Collaborative Journalism," considers banning the T-word to describe a person who carries out terrorist acts a public service as important as the AP's disgraceful 2013 decision to banish the term "illegal immigrant" to describe an immigrant who is, well, here illegally. But for now, here are his opening paragraphs (HT PJ Media; links are in original):

Terrorist Is Now a Biased Term. Journalists Should Stop Using It.

All available evidence suggests that when Micah Johnson sniped police officers in downtown Dallas on Thursday, he intended it as a political act. 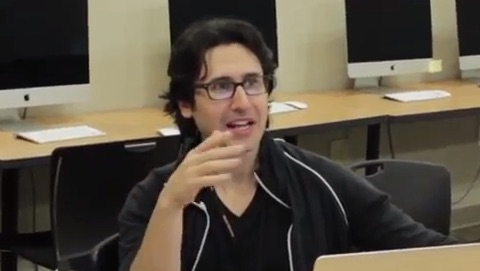 During the ensuing standoff, he told police negotiators that he was angry about the recent apparently unwarranted killings of black men by police, and “stated he wanted to kill white people, especially white officers,” according to Dallas Police Chief David Brown.

Johnson could not have reasonably believed that he’d shoot enough cops to actually diminish the capacity of law enforcement agencies to unjustifiably kill black people. He did it to send a message, to arbitrarily terrorize cops in the way that he felt arbitrarily terrorized by them.

Am I arguing, then, that journalists (like me) should be calling Johnson a terrorist?

No, even though I think the dictionary definition of that word clearly applies to him.

The "dictionary definition" to which Ragusea refers defines "terrorism" as "the use of violent acts to frighten the people in an area as a way of trying to achieve a political goal."

Based on what he told police before they sent in a bomb-laden robot to kill him, Johnson was targeting specific people: white cops. And if he couldn't target white cops, he'd settle for shooting white people. Clearly there was a disinterest in shooting non-whites. To an extent, that distinguishes him from "genuine" terrorists, who generally kill as many people as they can to maximize bloodshed and "to frighten people" (the one exception: Islamic terrorists sometimes deliberately spare Muslims). Johnson is more aptly described as an "assassin."

That takes us to Ragusea's main complaint, which is that "terrorist" has become in his view a de facto anti-Islamic term (bolds are mine in the rest of this post):

... I’ll grant you that what I’m about to claim is an unprovable counterfactual, but past experience suggests to me that if Micah Johnson’s name had been Muhammad Jabir, right-wing media would have immediately jumped on the T-word. If his Facebook activity had linked him to Islamism (instead of Black nationalism, as in Johnson’s case), mainstream media would have at least batted it around, too.

We used to use terrorist to describe all kinds of people, from Irish Catholic republicans to American Jewish radicals. But since 9/11, we’ve been using it much more swiftly in reference to Islamists. (In fairness, that’s partly because Islamists have been doing a lot of terrorism over that time.)

Well, "in fairness," Adam, Islamists have been "doing" darned near all of the post-9/11 terrorism.

As of 7 p.m. Eastern Time Sunday evening, the web site TheReligionOfPeace.com reported that "Islamic terrorists have carried out 28,833 deadly terror attacks since 9/11." I doubt that any other group is responsible for more than a few hundred attacks during that time.

So if people who follow the news tend to associate "terrorism" with "Islam" these days to the point of near-exclusivity, it's hard to blame them, and it's arguably the fault of a religion whose leaders won't condemn these acts unconditionally and won't do anything about so-called houses of worship which encourage violent jihad for allowing that accurate perception to take hold. There's such an overwhelming chance that a given attack is rooted in radical Islam that the average person logically starts with that tentative assumption, and needs to see evidence that it wasn't to believe otherwise.

Here is Ragusea encouraging the Associated Press to get with the program:

... The big problem with illegal immigrant wasn’t that reporters applied it inconsistently—the term simply became too judgmental, too toxic for neutral copy. So, in 2013, the Associated Press Stylebook dropped it.

Likewise, I think we’ve reached the same point with the T-word. Reuters—a less influential force in American journalism style than the AP—agrees with me.

Indeed, Reuters has essentially banned the direct reporting of the two T-words, something of which I suspect most people are unaware. Here are the first two of five paragraphs the wire service devoted to the term in its Handbook of Journalism:

So Reuters "solved" the pesky problem of "terrorism" and "terrorists" by deciding that no "specific event" qualifies as terrorism, and that its reporters will never themselves call anyone a "terrorist." Ragusea wants the AP to go down that road.

Stephen Kruiser at PJ Media has some harsh words for people like Ragusea who seem to want to go full Orwell every time they see words they don't like:

... This just adds another dangerous layer of make-believe to the denial dance that the press does in concert with left-leaning politicians.

There is a lot that is nuanced in this complex, dangerous world. Figuring out who the terrorists are and labeling them as such isn't one of them, however. This is all very simple, and anyone fancying him or herself a deep thinker because he or she introduces complexity to something simple isn't very bright.

Maybe we should encourage the AP to make the move to ban the T-word. It could mark the final unmasking of a news organization which long ago threw its objectivity into the toilet, but has somehow managed to maintain its veneer of credibility with most news consumers and most of its subscribing outlets.

I daresay that a significant portion of even low-information news consumers and voters would recoil at the idea that no murderous act or actor, no matter how deadly or depraved, can be called "terrorism" or have the person involved labeled a "terrorist" any more. Reality-based New Media might gain tens of millions of new readers and followers. That can't happen soon enough.