The antennae went up when I saw the following tease on the front page of Thursday's USA Today print edition: "Obama commutes sentences for 61 low-level inmates." The brief description which immediately followed told readers that "He has cut sentences for 248 so far, more than (the) previous 6 presidents combined, official says."

Hmm. What's a "low-level inmate"? The underlying Page 3A article by David Jackson (posted in slightly revised form Wednesday evening at the paper's web site) tells us that it's someone who has committed "low-level drug offenses." The list of commutations published by the White House identifies the supposedly puny "low-level offenses" the recipients of the President's commutations committed. Here's a hint: The average person won't agree with the "low-level" characterization.

A spreadsheet detailing the results is here.

What it shows indicates that President Obama is being extraordinarily reckless with public safety.

All 61 were indeed serving time for drug-related charges. But the "low-level" drugs involved included the following (marijuana was ignored, because every offender was involved in dealing a more harmful drug):

At least seven of the offenders were serving time for dealing multiple drugs.

50 of the 61 were convicted of intent to distribute, while 23 were convicted of actual distribution. 12 were convicted of both. In other words, all were either shown to be dealing drugs, or had quantities of drugs in their possession which only made sense if one was involved in dealing (hence, the lesser but still relevant charges of "intent").

12 of the 61 were convicted of firearms-related offenses ranging from possession to use while committing a crime. 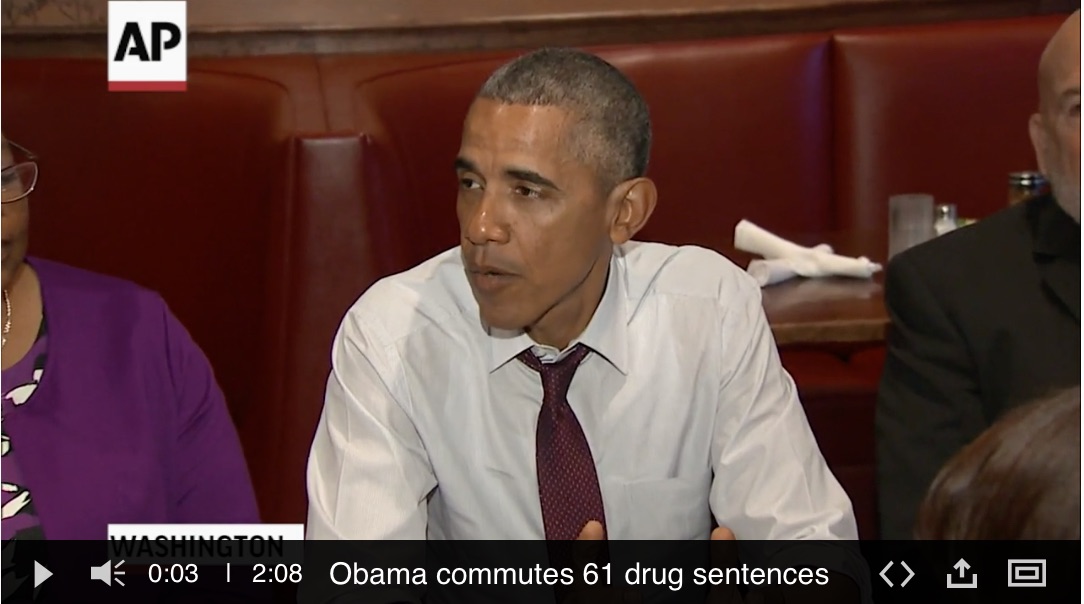 At the Associated Press, Josh Lederman claimed that:

All of the inmates are serving time for drug possession, intent to sell or related crimes. Most are nonviolent offenders, although a few were also charged with firearms violations.

No, Josh. All are serving time for intent to distribute, actual distribution, or both, as well as other crimes in many instances. The almost 20 percent in the group charged with firearms offenses (12 of 61) is far more than "a few." What a disgraceful whitewash.

"Kilograms" were noted as the weights of the drugs involved in seven instances, indicating that at least these seven "low-level inmates," and likely many more, were significant players in the drug trade.

Note that the crimes identified are only those the prosecution chose to pursue, and do not include any charges dropped during the course of any plea-bargaining which might have occurred involving smaller quantities of other drugs or other offenses less likely to be proven in court beyond a reasonable doubt.

Also note that the commutations only list the offenses involved in causing the criminals' most recent incarcerations. It seems likely, based on limited investigations of certain of the persons listed, that many of those involved were career criminals with long records of offenses.

One of the criminals whose sentence was commuted was investigated further because the White House's rundown didn't identify the drug(s) involved was found to be serving time for his third felony conviction. In other words, he was likely in prison for a long time because of a "three strikes" law. Obama's spiritual mentor, Jeremiah Wright, railed against three strikes laws as racist. It is reasonable to suspect that quite a few of Obama's commutations might relate to three-strikes offenders whose third offense might not have been as serious or as violent as their previous two.

An Investor's Business Daily editorial on Thursday noted that the commutations barely scratch the surface of the de facto administration-orchestrated jailbreak:

At the same time, the Obama regime has also approved the early release of roughly half — more than 46,000 — of all drug traffickers in the federal pen, including the kingpin of a multimillion-dollar operation that smuggled drugs from Canada to Maine.

Already some of these inmates who had their sentences retroactively slashed have been rearrested — including at least one for triple homicide. So why is the White House celebrating this reckless mass clemency? And why aren’t Republican leaders, both in Congress and on the presidential campaign trail, raising alarms?

Just last month, a convicted crack dealer who left prison early as part of the Obama administration’s mass release of federal inmates was indicted in connection with the triple murders of his ex-girlfriend and her two young daughters, ages 7 and 10. Wendell L. Callahan, 35, allegedly broke into their Columbus, Ohio, apartment and brutally and fatally stabbed all three victims, while seriously injuring a fourth person.

Callahan should have been in jail when the crimes occurred, but he was released several years early, thanks to Obama’s sympathy for crack dealers.

The Columbus Dispatch reported the murders when they occurred in February, as well as the reason why Callahan was not still behind bars:

In a 2011 motion for Callahan’s last (sentence) reduction, Callahan’s attorney said federal prosecutors agreed that Callahan’s good behavior in prison and other factors led both sides “to conclude that his early release did not present a danger to the safety of the public.”

Federal prison records show that Callahan was released on Aug. 8, 2014. If the new federal guidelines hadn’t gone through, he likely would have been in prison at least until late this year, even with time off for good behavior.

... Prior to his U.S. District Court case, Callahan was convicted in connection with a nonfatal shooting in 1999 and another drug case.

The New York Daily News reported that "The carnage (at the crime scene) was so gruesome that responding officers are being offered counseling, the Columbus Dispatch reported." An indication that this was the case is no longer present at the linked Dispatch story.

To be clear, Congress shares some of the blame for giving the U.S. Sentencing Commission more leeway than it thought it had given. Congress believed that its revisions to sentencing and review guidelines were relevant only to new cases; but the Sentencing Commission, apparently with requisite authority, began to apply them retroactively. Congress has has yet to close the retroactivity loophole that set Callahan free to kill three people.

To say that press is doing an awful job of covering this madness — and the so-called "criminal justice reform" effort in general — is to belabor the obvious.