The business press's determination to convince the public that weak economic news is really strong seemingly knows no bounds.

Today, shortly after the Federal Reserve's Industrial Production report for February showed a seasonally adjusted 0.5 percent decline — worse than expectations of -0.3 percent — the Associated Press pretended in its headline and in reporter Christopher Rugaber's first three paragraphs that the Fed's release only covered manufacturing, which "just so happened" to be its single somewhat positive element (bolds are mine):

US FACTORY OUTPUT PICKS UP IN FEBRUARY FOR 2ND MONTH

U.S. factories produced more machinery, appliances and other goods last month, the second straight increase in output and a sign manufacturing may be stabilizing after a difficult year.

The Federal Reserve said Wednesday that factory production rose 0.2 percent in February, after rising 0.5 percent the previous month. The increases in the past two months follow four declines in the previous five months.

The gains suggest that U.S. manufacturers are overcoming challenges from the strong dollar and weak overseas growth, which have cut into exports. Factories added jobs last year at the weakest pace since the recession ended in 2009.

Those who look at headlines and only the first or second paragraph of Rugaber's report on their computers and mobile devices will naturally believe that today's news from the Fed was unconditionally positive. News readers on TV and radio will focus on the AP's headline and opening paragraph.

The AP reporter waited until his fourth paragraph to deliver the bad news which outweighed the positive reading for manufacturing: 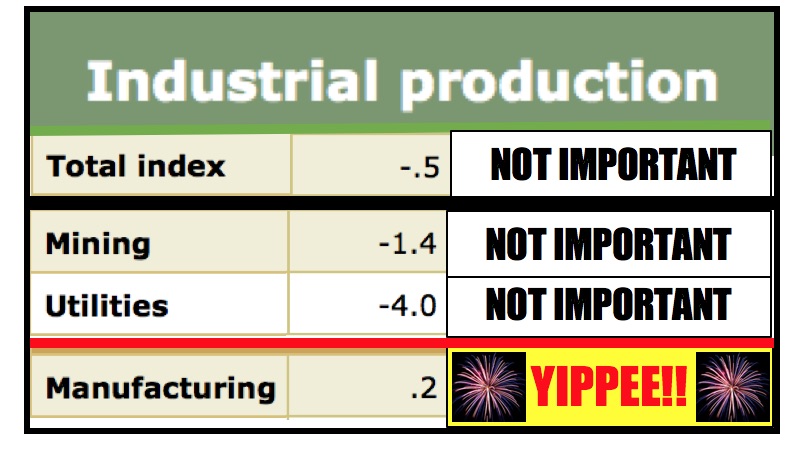 The plunge in oil prices has dragged down mining output for more than a year. Mining production has fallen an average of 1.3 percent a month for the past six months, the Fed said.

Contrarian blog Zero Hedge has noted that today's revelation that February 2016's overall industrial production as 1.0 percent lower than it was in February 2015 "would be the first time since 1952 that Industrial Production has declined for four straight months without the US economy not being in recession." As will be seen later, manufacturing is almost in an unofficial recession already.

In later paragraphs, searching desperately for support for his "manufacturing is getting better" meme, Rugaber went to two very odd places:

Other recent manufacturing data has also shown some recovery. The Institute for Supply Management, a trade group, said its measure of factory activity in February showed that manufacturing shrank for the fifth straight month. Yet its gauge rose to 49.5, close to a reading above 50, which signals expansion.

And orders for manufactured goods rose 1.6 percent in January, after two straight declines, a sign output could increase again in the coming months.

So the ISM says that manufacturing is still in contraction, and one month short of being in an unofficial two-quarter recession, and that's a sign of "some recovery." That's really scraping the bottom, Chris.

As to manufacturing orders, Rugaber had to go back two weeks to find that positive number — but it really isn't all that positive in context. The 1.6 percent increase the AP reporter cited cited trailed expectations of 2.0 percent to 3.0 percent, and offset a bit more than half of January's steep 2.9 percent decline. In the bigger picture, despite that one-month increase, both raw and seasonally adjusted manufacturing orders in January came in below January 2012, i.e., four years ago. Even after considering falling prices of petroleum products (and assuming that quanities used haven't gone down, which isn't necessarily the case), the advance in January orders in all other areas during the past four years has been unimpressive:

The 5.39 percent seasonally adjusted increase from January 2012 to January 2016 is only 1.35 percent per year, meaning that manufacturing has been a lagging performer compared to the nation's already weak economic growth for quite some time.

But wait. In raw terms, the situation is far worse. The four-year increase of 2.29 percent is an average of only 0.57 percent per year.

How can the four-year difference between the seasonally adjusted and not seasonally adjusted figures be so great? Those who believe that there's a great deal of data cooking being done behind the scenes can be forgiven for believing that — and for wondering when the divergence will even itself out and make the seasonally adjusted numbers, the only numbers the press ever covers, look bad. My guess: In January 2017, if a Republican takes the White House.