The Des Moines Register likely broke new ground when it endorsed Hillary Clinton for the Democratic presidential nomination on Saturday. The Register may be the first major newspaper to endorse a major-party presidential candidate under investigation by the FBI at the time of the endorsement.

The time stamp at the editorial's link is currently and inexplicably this morning, but pundits and bloggers have been commenting on it for two days, and Google News says the endorsement is from "2 days ago." This time disconnect seems fitting, as it reflects how disconnected from reality the Register's editorial board had to be on so many levels to make its endorsement. Let's look at just one of them, namely Mrs. Clinton's admitted use of a private email server to conduct government business when she was President Barack Obama's Secretary of State.

The editorial only refers to the issue twice. Here is the first:

She is not a perfect candidate, as evidenced the way she has handled the furor over her private email server. In our endorsement of her 2008 campaign for president, we wrote that “when she makes a mistake, she should just say so.” That appears to be a lesson she has yet to fully embrace. 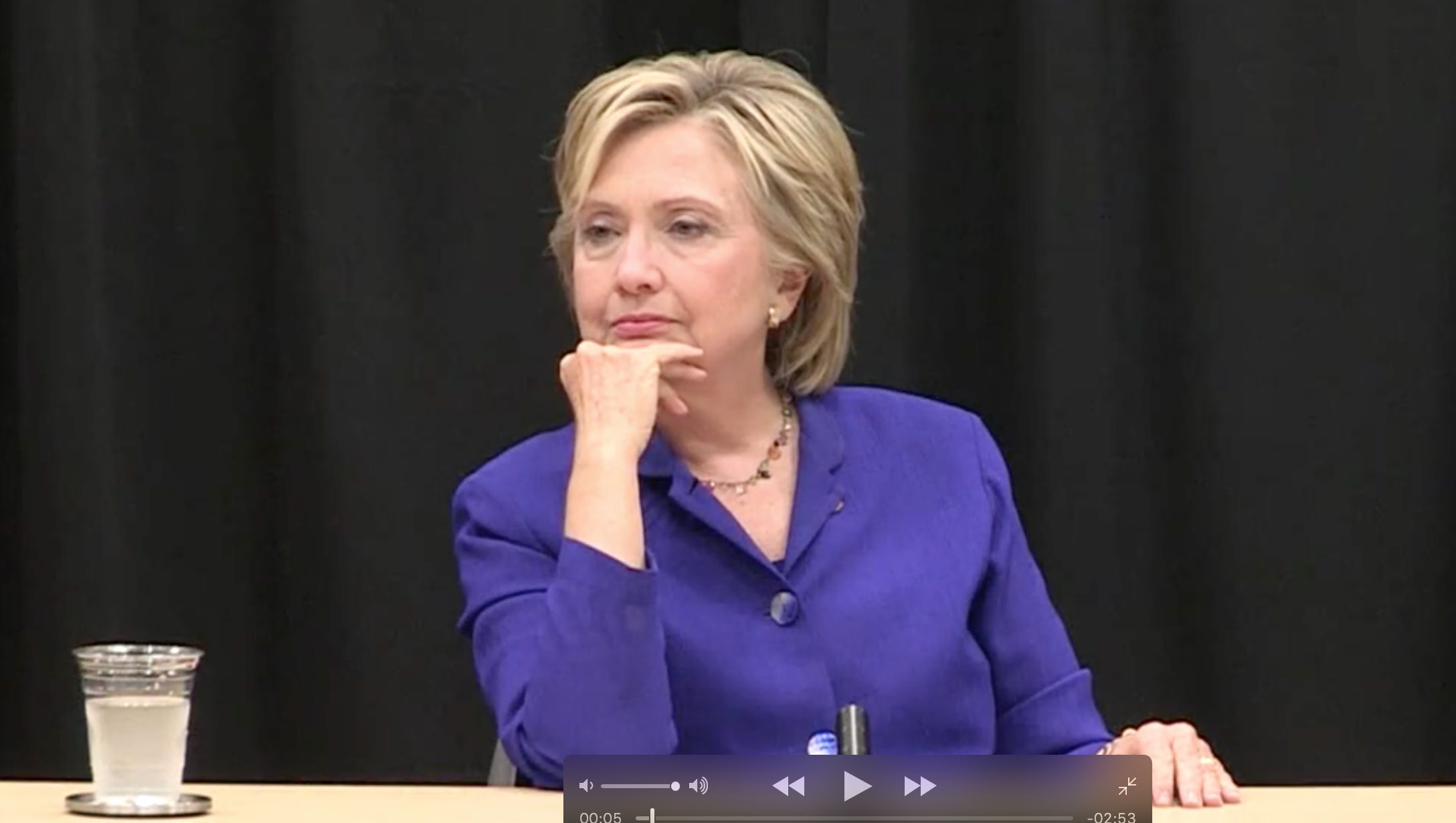 Mrs. Clinton hasn't "embraced" the idea of genuinely admitting "mistakes" at all. She has only hinted at contrition several times during the private-server controversy. Her standard response has been along the lines of, "I'm sorry people are upset about it," which is a far cry from the unconditional "I'm sorry" the American people have a right to demand.

Specifically, in a portion of one of Mrs. Clinton's interviews with the Register (video 9 of 11 at the editorial), she said: "I'm sorry that it's been so much of a subject of speculation and curiosity." She's not at all sorry about what she did.

But Mrs. Clinton doesn't merely fail to genuinely admit a "mistake." She more often than not conducts an aggressive attack against any person who happens to get in the way, even those charged with investigating the matter. Last week, reprising her own disgraceful interview 18 years ago with Today Show lapdog Matt Lauer as her husband's Monica Lewinsky-related troubles grew, her campaign spokesperson essentially said that Intelligence Community Inspector General and Obama administration nominee I. Charles McCullough III, who informed a House Committee that "emails on her unsecured, homebrew server contained intelligence from the U.S. government's most secretive and highly classified programs," is a part of a vast right-wing conspiracy against her. She and the people with whom she surrounds herself haven't changed one bit.

Here's the second email reference in the Register editorial:

Over the course of two meetings, Clinton spent more than three hours with the editorial board, answering questions in a direct and forthright manner. She exhibited an impressive command of the issues, though we’d have liked to hear more from her on the debt and the future of Social Security. She was somewhat prickly and defensive when discussing her emails, but overall she was gracious, engaging and personable.

The interview just referenced doesn't merely show Mrs. Clinton being "somewhat prickly and defensive." It shows her not telling the truth (at the 2:20 mark of the related video):

HILLARY CLINTON: I've tried to answer all the questions. I've taken responsibility for having done that, and I have been as transparent ... as I can be. You know, I've turned over all my work-related emails, once they go through the process that they have to go through at the State Department, turning over the server, and testifying at the end of October ... My view is that there was nothing classified on my system. I will repeat that. I never sent nor received any classified material with my personal email.

There's so much dishonesty and misdirection in that answer that I feel compelled to call in reinforcements from the intrepid editorial board at Investor's Business Daily. IBD's editorialists work harder than one has a right to expect merely to report news the rest of the establishment press ignores or downplays, even before getting around to opining on it.

The media’s “no smoking gun” refrain about Hillary Clinton’s emails has been strangely muted since several turned up with information beyond Top Secret. But this is just the latest in a growing arsenal of smoking guns.

... if a “smoking gun” means catching her in a flat lie or putting national security at risk or being unbelievably, if not criminally, negligent in her handing of classified information ... there are so many smoking guns now that Hillary is starting to resemble Annie Oakley.

The latest revelation is the hardest for even a biased press to ignore, because it so clearly demonstrates that Clinton repeatedly lied when she said she never knowingly sent or received any classified material from the private, unsecured homebrew email server stashed in her New York home.

... before this revelation, we learned about other troubling smoking guns.

The editorial board at the Des Moines Register is either full of people who were fully aware of most or all of the smoking guns IBD identified, or they're dumber than a box of rocks. One almost wishes it were the latter, but it's overwhelmingly likely that it's the former — meaning that the board's members are not just willing but apparently eager to see someone with Mrs. Clinton's serially slimy track record take control of the most powerful political office on earth.

The Register didn't have to endorse anyone. If it didn't consider Bernie Sanders a worthy Democratic Party nominee, it shouldn't have. That it did, as noted earlier, likely breaks dangerous and alarming new ground.