Behar: 'A lot' of Homeschooled Kids Are 'Demented' 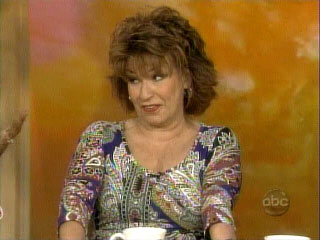 "The View" co-host Joy Behar is well on her way to unhinged, if not already there.

Earlier today, NB's Justin McCarthy noted that Behar, in mentioning GOP Vice Presidential nominee Sarah Palin, said that "we all know that the woman is an airhead."

Michelle Malkin noted this evening that Behar also took an uncalled-for cheap shot at those who are involved in an important and growing alternative not only to the public schools, but also to traditional brick-and-mortar classroom education (video is at link):

Behar show(ed) .... her contempt for both homeschooled students and parents: “A lot of them are demented when they’re homeschooled.”

If this is "dementia" by Behar's twisted standards, perhaps we need more of it.

An article Ms. Malkin linked by Richard Sousa of the Hoover Institution that originally appeared in the June 11, 2007 San Francisco Chronicle documents some of the successes achieved by homeschoolers:

Evan is not alone as a high-achieving homeschooled child. The 2003 and 2005 National Geographic Bee champions were homeschooled. In 2005, a 16-year-old homeschooled child won the U.S. Chess Championship, making him the youngest player to claim the title since 14-year-old Bobby Fischer won it in 1958. And they’re athletic to boot; the 2005 girls Gatorade high school soccer player of the year was homeschooled. Remember, homeschools enroll only a small percentage of America’s children.

..... The number of students who are home-schooled is a matter of some dispute, but it is clear that their numbers are increasing and that the performance of homeschooled children is outstanding.

By now, it's not exactly a secret that the election of Barack Obama has been "empowering" in a negative sense to some who supported him. Certain of those who on the November 4 the winning side threaten that "you're either with us or against us," which begs the question, "or what?" (George Bush never made this statement to the American people, but instead delivered it in September 2001 to nations harboring terrorists). Same-sex marriage advocates shake down businesses where any employees dared to even nominally financially support Proposition 8, and work to end the careers of anyone in the performing arts who did the same.

Behar's comment is perhaps inadvertently significant, in that it comes from someone who, as Malkin noted, used to be (O .... M .... G) a public-school teacher. Is Behar mouthing the sentiments of emboldened public-school establishment teachers and their unions? Knowing that there is little to fear in the way of repercussions from Washington, where the Big Labor-beholden Democrats run the show, is the effort to cut off the homeschooling movement at the knees going to grow more aggressive in the coming years? I'd bet that it will.