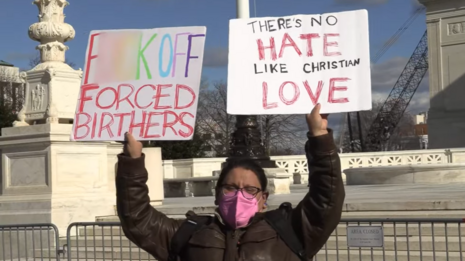 Friday's annual March for Life drew some assorted news stories (not from ABC). MRCTV's Tierin-Rose Mandelburg joins the show to discuss her video from the protest scene, and how pro-abortion people struggled with her questions. "What is an abortion?" was greeted as some kind of trick question. It's a real mind-bender. When you carry a sign saying "F--- Off Forced Birthers," you deserve a couple of questions.

Don't miss Curtis Houck's research on how they covered this March over the weekend, and in recent years. There's a Rich Noyes flashback to the worst in pro-abortion media bias. Whenever there's coverage, the pro-life side gets the rough side of the labels, like "abortion rights opponents."